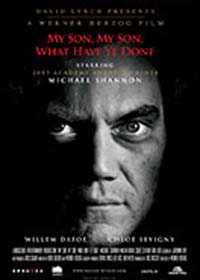 Overshadowed by a higher-profile project, a quasi-remake of The Bad Lieutenant, this is Werner Herzog's other American film of 2009, and a David Lynch production at that. It pretty much delivers on whatever expectations might come with that combination. It's "inspired by a true story," and in an interview included on the DVD Herzog expands on the meaning of that term. There is a true story of an acting student who played mythical matricide Orestes and then killed his own mother. Herzog and co-writer Herbert Golder, who initiated the project, used that incident and some of the personal details of the killer's life as a framework for their own speculations on the factors driving a man to murder. The killer is a free man today and Herzog met him; he relates feeling acute disquiet on discovering that the man had an Aguirre: The Wrath of God poster in his trailer-park home. That discovery may have inspired the director to film part of the new picture back on some old Aguirre locations in Peru, once he decided that Pakistan, where the real killer had a deformative experience, was just slightly too dangerous for location shooting. As if to compensate for that compromise, Herzog, along with star Michael Shannon and producer Eric Bassett, decided to do some clandestine filming in the volatile Uighur region of China. That footage also serves, arguably, as an intrusion of the real killer's madness on the fictional madness of Brad McCullum, Shannon's character. It's unclear whether the fictional character is ever supposed to have been in a Muslim country, though he tells his doomed kayaking buddies in Peru that he intends to become a Muslim as a way to stunt his internal development. The Uighur footage could easily represent the killer's pilgrimage to an Islam of his own imagination, though his practice seems to extend only to occasionally calling himself "Farouk." Otherwise, he has a fraught relationship with God, whose face he sees on a Puritan Oatmeal can and whose voice he hears on a recording of "I Was Born to Preach the Gospel And I Sure Do Love My Job." 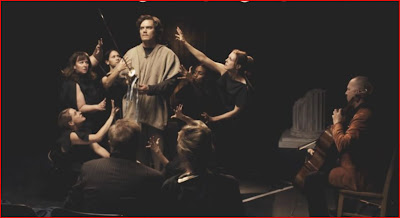 "Some people act a role; I play a part." Brad McCullum (Michael Shannon) muses on matricide on stage (above) and at his flamingo-cluttered home. 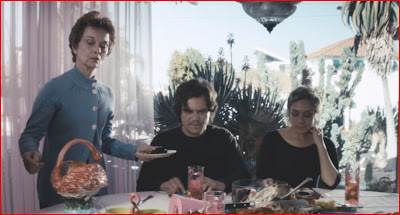 The film's tag is "The Mystery Isn't Who, But Why," but don't let that leave you thinking the mystery gets solved. Instead, Herzog's point seems to be the irreducibility of a madman's mind to one decisive influence, a key to all the mysteries in his head. There's no Rosebud to help us here. We can see an apparently obvious influence of the Orestes myth, which is instantly complicated by Brad's girlfriend (Chloe Sevigny) taking the role of Clytemnestra, Orestes's mother. But Orestes isn't quite a perfect fit. Brad insists on wearing an inappropriate poncho-like garment he picked up in Peru that actually makes him look more Biblical than Greek. Considering his role in a fatherless household and his problematic relationship with God, Brad could be a Jesus figure in some neglected nook of his noodle. That possibility emerges most alarmingly when he invades a naval hospital, desiring to visit "the sick in general." On the other hand, he may also see himself as a baby ostrich like the birds his homophobic uncle (Brad Dourif) raises. Flightless or ungainly birds are the dominant animal motif of the picture, as both Brad and his suffocating mother (Grace Zabriskie) are obsessed with flamingos. Something can be read into everything shown here, but too much shouldn't be read into anything. Everything's a factor for such a vulnerable mind, but such a mind isn't the sort of puzzle where all the pieces fit. 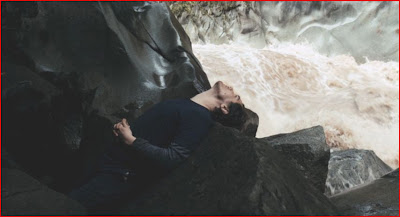 My Son, My Son, is the pilgrimage of a wandering mind to Peru, China and points unknown. 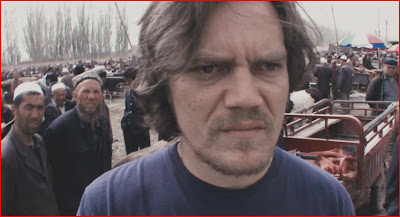 Without a single Rosebud and the closure such a key would promise, My Son could well be a frustrating experience for many viewers. The police procedural framework, with Willem Dafoe as the straight man in charge of negotiations, creates dramatic expectations that the eventual anticlimax probably deliberately disappoints. Almost by nature, given the collaborators, the film is digressive and gratuitous, and some of Herzog's gimmicks, like making characters stand still instead of freeze-framing to represent time standing still for Brad, simply don't work. The coda, in which a small boy discovers some of Brad's legacy, clarifies matters not a bit, nor is it meant to. The best I can suggest is that the peculiar discovery begs interpretation by the boy himself, and could mark the beginning of an accumulation of mental associations that might leave the boy as mad as Brad someday. Or it could mean no such thing. This is a movie that insists on each viewer drawing his own conclusions. That may be unsatisfactory, but I was stimulated by the challenge, at least, and I found Herzog's imagined reconstruction of the clutter of a deranged mind somewhat convincing. 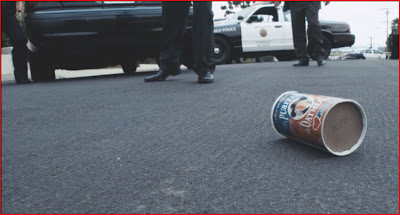 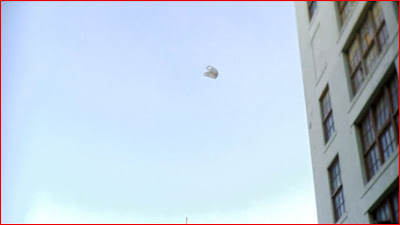 An interesting accompaniment to Herzog's study of symbolism and psychosis on the First Look DVD is Ramin Bahrani's short exercise in anthropomorphism, Plastic Bag, for which Herzog voices the title character. Strange as it may sound, this narrative of the endless life and adventures of a creature separated from and searching for its "Maker" would make an even better companion piece for Toy Story 3. As Herzog drones on teutonically bemoaning his plight (had he directed this himself, only Kinski could have done the voice), Bahrani dares you to disbelieve, but his epic visuals tell a different, eloquently more plausible story. The one-two punch of Plastic Bag and My Son, My Son makes this DVD, at the very least, one of the most interesting things you could watch this year.
Posted by Samuel Wilson at 9:49 PM

"Something can be read into everything shown here, but too much shouldn't be read into anything. Everything's a factor for such a vulnerable mind, but such a mind isn't the sort of puzzle where all the pieces fit."

I totally agree. Great review. You brought up some things that I never really caught on to when I saw it and you bring up a lot of good points in general. I did like this one a lot, but the main selling point for me here was Michael Shannon. I'm a big fan and thought he delivered the goods here. The movie itself, I thought, was good but not great.

Like you said, this does leave a lot up to the viewer to interpret. It's definitely one that requires repeat viewings to fully grasp, if that's even possible. On a side note, I preferred BAD LT. to this, but for Herzog to drop both of them on us in the same year is amazing.

Aaron, I haven't seen Port of Call New Orleans yet,probably because I'm a little wary about Nicolas Cage these days, but if it's better than My Son I ought to give Herzog the benefit of the doubt.