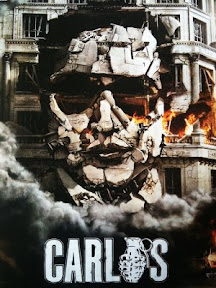 The Sundance Channel deserves an Emmy just for scheduling Olivier Assayas's 5.5 hour epic about the career of Ilich Ramirez Sanchez, not to mention taking part in the production. The film played out over three nights earlier this week in advance of a limited theatrical run, but I won't wait until it hits the big screen to call it one of the best films of the year.

Under his nom de terror, Carlos Martinez, or the unwanted sobriquet "Carlos the Jackal," the Venezuelan Ilich Ramirez Sanchez cut a flamboyant swath across Europe and the Middle East from the 1970s until his capture in Sudan in 1994. First as an agent of the Popular Front for the Liberation of Palestine, and then as a freelancer, Carlos (Edgar Ramirez) was dedicated to armed struggle against imperialism as his route to glory. As Assayas's film shows, Carlos was one of many young people with similar dreams in the aftermath of the Sixties. The first third of the film emphasizes the sociability of Carlos's milieu as the would-be revolutionaries party and screw and argue over strategy and tactics. Carlos's sexuality is foregrounded -- Ramirez gives us the full monty within the first few minutes -- as is his sexism. Revolution is a turn-on for Carlos's crowd; he uses a hand grenade for foreplay with an enthralled girlfriend. There are always girlfriends for Carlos; while they're usually revolutionaries like he is, he often treats them in an inegalitarian fashion. In the second half, he tells Magdelena Kopp that, as his lover, she must accept revolutionary militant discipline. That extends to accepting his cheating on her after she's given birth to his child because he has "needs." Near the end, this leftist warrior is indulging in a most exploitative form of sexuality, the restroom blowjob, and as if as comeuppance he's nearly crippled by bouts of severe testicular pain. Carlos is no ascetic, and arguably no fanatic. He talks the talk of revolution, but it may all be a matter of self-gratification (or "glory") for him.

Terrorism was different in Carlos's time. Throughout the film, there's an implicit contrast with the puritanical zealots we identify with terrorism today. Though Carlos late in the game talks about embracing Islam to butter up prospective Iranian sponsors, revolution was never about self-denial for him. While he tells people that he expects to be killed at any time, he doesn't believe in suicide. That point is driven home in the central sequence of the long film, Carlos's raid on the 1975 OPEC summit in Vienna. His scheme is a dizzying success, except for the accidental killing of a Libyan diplomat that complicates his plan to escape with hostages via Libya to Iraq. His decision to release the hostages, including the Saudi oil minister, in return for $20,000,000, enrages his PFLP and Iraqi handlers, who had ordered him to kill the minister. Carlos sees only good in taking the money, which he sees as his only way of getting out of the situation alive, but his handlers feel that he should have obeyed orders and killed the Saudi at all costs. They think he's more interested in being a celebrity terrorist, and while he makes good arguments to the contrary, you can't help thinking that they're partly correct. And while Carlos basks in his clandestine celebrity, it'll be downhill from here for him. It's downhill not just because he's given in to egoism, but because his original revolutionary fervor has been subordinated to the power politics of nations. His plans are subject to the national interests of Iraqis, Syrians, Hungarians, East Germans and so on. When he accepts asylum from these states, he also puts himself at risk of being thrown out at any convenient moment. Time is also passing him by. Late in the Seventies Soviet KGB chief Yuri Andropov meets with Carlos and other top terrorists and puts an open contract on the life of Egyptian president Anwar Sadat. After two years of desultory planning, Carlos's gang is beaten to the punch by an Islamist conspiracy. The film still has nearly two hours to go, but from that point Carlos himself is basically obsolete. He has one good run left when he terrorizes France to force the release of two captured comrades, but after that he lives on a reputation that also makes him a liability to anyone who harbors him, especially after the communist bloc collapses and everyone wants to cut a deal with the U.S. Carlos's changing fortunes are a history lesson on the global political upheaval of his time.

As a film, Carlos is what I call a Scorsesean epic, a rise-and-fall story in the manner of Goodfellas and Casino with a rocking soundtrack of oldies. Given how the film opens with the car-bombing of a Palestinian terrorist, you could also see Carlos as an unofficial sequel to Steven Spielberg's Munich. If you envision Carlos in high-concept terms as a cross between Munich and Goodfellas you may come close to its essence. Like Scorsese does, Assayas and co-writer Dan Franck delineate the rise of a corrupt yet successful system that inevitably declines, but while Scorsese focuses on the internal, personal corruption that kills the system, Carlos, perhaps in keeping with its subject's preferred mode of historical analysis, links his decline with the collapse of the Cold War environment within which he thrived, while leaving room for the damage done by his own ego and other failings. Appropriately, Edgar Ramirez carries the film with a DeNironian performance of body modification, transforming from buff Seventies stud to bloated fugitive, briefly back again and finally to middle-aged thickness, stiffness and exhaustion. Ramirez can talk the ideological talk and belie it by swaggering through the selfish, sexist glory-seeking walk. Fluently multilingual, he's the perfect star for a film half in English, half not, holding the polyglot action together and keeping it intense in all languages. Carlos ought to be a star-making film for him. He has a serial harem of attractive support, Bond girls of terror, most notably Nora von Waldstaetten as Magdalena Kopp and Julia Hummer as the alarmingly bloodthirsty Nada, in whom Carlos has no romantic interest.

Assayas taps into a deep tradition of French genre filmmaking, from the silent supervillain serials of Louis Feuillade (to which he'd already paid homage in Irma Vep) to the caper-thrillers of Jean-Pierre Melville. He also manages to fit in an apparent homage to The Godfather (involving a bathroom break to fetch a gun) along the way. Working on an unprecedented scale, he keeps things intriguing with bursts of bloody violence as well as more elaborate set pieces like the Vienna raid. Some moments even feel blackly comic, as when Carlos's cronies twice bungle attempts to hit El Al jets with rocket launchers. The ease with which the terrorists stroll into airports and set up their weapons in the middle of crowds is doubly absurd from today's perspective. The film may appear episodic, but the script keeps you aware of the relationships, both political and romantic, that complicate Carlos's life and the stakes involved at every point in the movie. Over five hours and change I was never bored. A theatrical version less than half the length of the original has been prepared for release and may be available already on demand. Perhaps understandably, I say accept no substitutes and watch the full version whenever or wherever you can find it.

Here's a trailer from IFCFilmsTube:

Posted by Samuel Wilson at 6:41 PM

can't wait to check it out.

Great connecting lines to a number of other works CARLOS at least seems partically indepted to. I want to say more (and this is a riveting and passionate essay) but as I have plans to see this on Sunday afternoon at the IFC Film Center, I will wait. Assayas will be there to introduce the 330 minute roadside version, and it is anticipated he will also head up an after screening Q & A.


I will have to summon up my stamina!