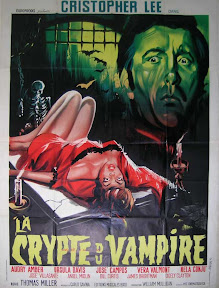 This Halloween night, Wendigo and I present a Frankenstein's monster of a vampire film, a sewing-together of popular horror elements in early 1960s Europe. It's one part Mario Bava's Black Sunday (the revenge of a condemned witch who has a look-alike in the present day), one part Sheridan Le Fanu's lesbian-vampire ur-text Carmilla (au courant thanks to Roger Vadim's Blood and Roses) and one part just plan Christopher Lee. That may read like an awkward mix, but in the hands of "Thomas Miller," aka veteran director Camillo Mastrocinque, it's alive!... 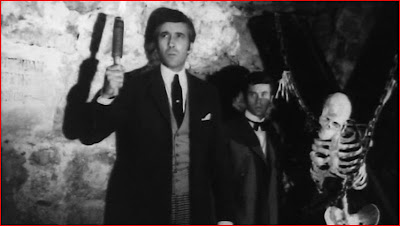 Since Christopher Lee is top-billed, we may as well show him first.
What makes it work is the way the four-man Italo-Spanish team of adapters complicate the Carmilla story (which isn't acknowledged, of course) so that those familiar with Le Fanu may find themselves actually uncertain of how the story will turn out. As Wendigo pointed out to me, the standard Carmilla narrative doesn't kick in until just before the 24-minute mark, when a coach carrying the famous seductress (here called Ljuba and played by Ursula Davis) loses a wheel outside the Karnstein castle. 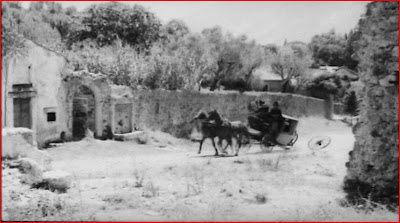 Before she arrives, we're introduced to a troubled Karnstein household, headed by a widowed Count Ludwig (Lee) indulging in an affair with his sexy blond maid Annette (Vera Valmont). The maid seems to be scheming to become the new Countess, either as his wife or his heir, but in her way stands Ludwig's daughter Laura (Adriana Ambesi), who has major problems of her own -- in her dreams, at least. She dreams of biting people on the neck and killing them. Under the tutelage of her caring, Satanist (!) head maid Rowena (Nela Conjiu) she has flashbacks to a Karnstein ancestress, Cirra, who was crucified (i.e. tied face down to an x-frame and left to die from exposure) for witchcraft, but not before cursing her descendants. At Annnette's instigation, Ludwig has invited young scholar Friedrich Klauss (Jose Campos) to research the history of Cirra and the curse, but as he comes closer to discovering the key detail -- that the curse will be realized through Cirra's lookalike -- an antsy Ludwig tries to shoo him away. 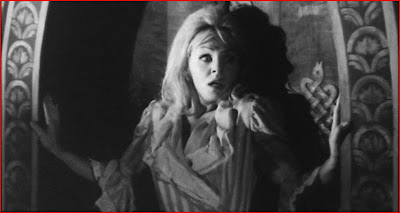 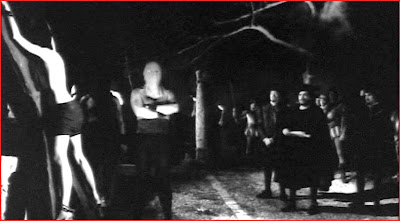 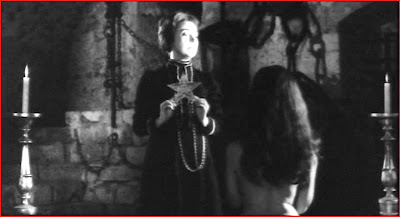 Who's responsible for those terrible dream/flashbacks Laura's experiencing? Ambitious Annete (top), maternal Satanist Rowena (bottom) or someone else???

With Annette apparently trying to drive Laura insane, and not necessarily needing to do a whole lot to reach her goal, and with Laura under the dubious protection of a devout devil-worshipper, Mastrocinque and his writers have set the stage for Ljuba's arrival. You may think you recognize Carmilla at this point, but what does Ljuba have to do with what we've already seen? Is she a prior instigator of events? Will she be a catylyst for future disasters? Or is she simply going to be an innocent, endangered bystander? It's Laura, after all, who dreams of biting Ljuba -- on whom she has an obvious girl-crush -- and Ljuba's neck is the only one that has marks on it. 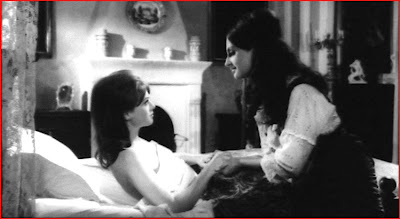 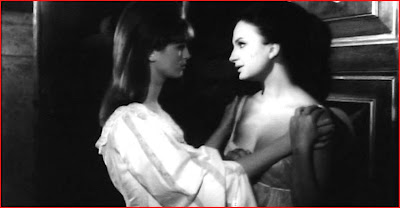 Is Ljuba the vampire, the victim or just the love interest in this picture? 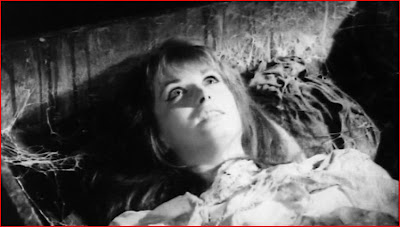 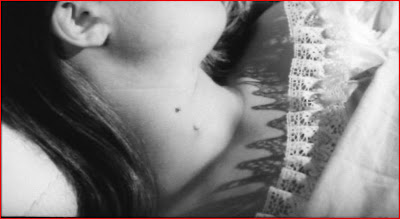 It's Laura who's obviously having supernatural experiences, and both Annette and Rowena seem quite capable of mischief, either against Laura or on her behalf. This chaos is best illustrated by the fate of an itinerant hunchback who tells fortunes and sells charms. Yes, Ljuba seems unduly alarmed by the man and his dog, but she seems just as alarmed when she and Laura discover him hanging by the neck in a crypt with a hand hacked off. And it's Rowena who hacked the hand off, to turn it into a Hand of Glory, a devil-approved divining tool to help her detect who's killing Karnsteins across the country. 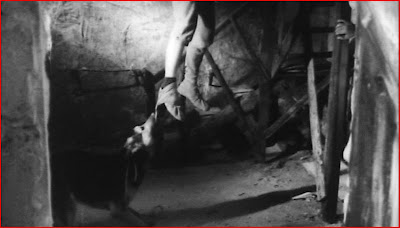 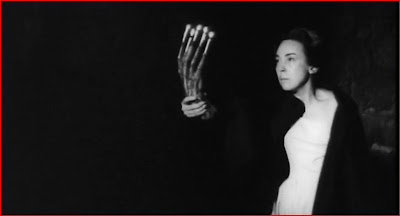 But then who stabs Rowena in the back before she learns too much? Annette? She sees it happen and freaks out, only to vanish through a secret passage. Is someone trying to get her out of the way? Who, then, and why? More than one person has a motive, and Mastrocinque strives heroically to keep the ultimate truth a mystery until the film's final moments.... 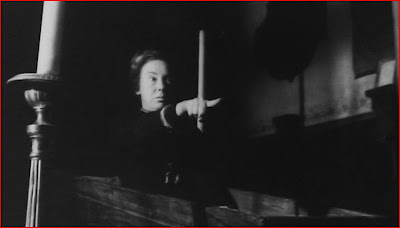 Rowena points an accusing finger from beyond the grave (above)
while the girls embark on a fateful elopement (below). 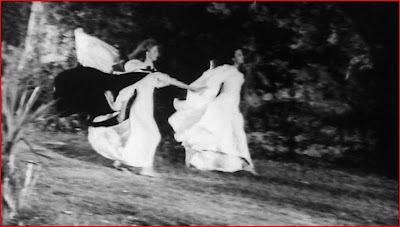 Wendigo hasn't seen every Carmilla-inspired movie, but he's seen a wide range of adaptations, including the loosely-inspired Blood and Roses and the more literally faithful Vampire Lovers. Crypt uses the core story as a starting point for a more elaborate mystery plot, but is otherwise faithful to the core. He pointed out to me that one surprise scare involving a man popping out of a coffin to attack one of the heroes, is straight out of Le Fanu, including the man's identity as the father of one of the vampire's victims. The key lesboerotic friendship between Ljuba and Laura is pretty much consistent with Carmilla, except with the names changed, as is the idea that the vampire walking the earth is actually a projection of the corpse that remains in its coffin. Wendigo hadn't heard of Crypt (which is also called Terror in the Crypt) before I added it to my Netflix queue, and would now not be surprised to learn that there are many more adaptations. While Vampire Lovers is more faithful and is free to be more explicitly erotic than the still-sensual Crypt, Wendigo doesn't see much distance between the Hammer classic and this underrated (5.4 on IMDB? It's better than that!) Euro effort.

Along with the creative adaptation, Wendigo enjoyed Crypt's Bava-inspired black-and-white cinematography and art direction, and the overall craftsmanship of the relatively unknown Mastrocinque. While no one actress in Crypt's cast is the equal of Barbara Steele in Black Sunday, -- and Mastrocinque would get his chance with her in An Angel for Satan -- they're all attractive or charismatic, and there's real chemistry between Ambesi and Davis, and they all have a better story to work with, in Wendigo's opinion, than Steele did. While distributors could not resist temptation and teased in the ballyhoo that Lee was the menace, the actor gives a solid, straight performance as a troubled, relatively passive hero, and even Jose Campos was adequate in the customarily romantic dull male lead role. Wendigo says that if he sees more films like Crypt, he may change his mind about European horror once and for all.

The following video, uploaded to YouTube by qloshima27, is more of a highlight reel than a trailer, but it gives you some hints of the action.

Posted by Samuel Wilson at 9:16 PM

I'd never even heard of that one, but now I must buy it.

I have this on my shelf, still unopened. I almost gave it a view the other night, but opted for something else. Good review as always, Sam.