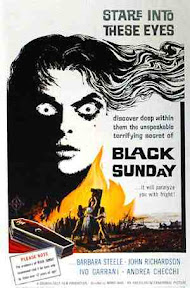 As a vampire-movie fan, my friend Wendigo is also a horror-film fan, but he doesn't necessarily judge vampire films by horror movie criteria. I asked him recently whether any vampire movie had ever actually scared him. He said that he couldn't recall one doing so, and then he recounted three films that did scare him. The first that came to his mind was the original version of The Blob; the mere concept of the creature and the fact that it could kill you while you were sitting in your chair simply by brushing against your foot spooked him as a kid. A more surprising film was Gore Verbinski's The Ring, as opposed to the Japanese original, which he has also seen. The American version didn't shock him as he watched, but the memory of the dead, wet girl's awkward, unnatural movements haunted him for nights afterward in troubled dreams. The other film was Mario Bava's landmark gothic horror from 1960, that annus mirabilis (or terribilis) of global horror cinema. But Wendigo had only the dimmest memories of what frightened him, though he remembered the spiked masks the condemned Satanists were forced to wear and the holes in Barbara Steele's face when her mask was removed -- not to mention her big, creepy eyes. It just so happened that I have Black Sunday in an Anchor Bay box set of Bava films, so I played it to jog his memory -- and it was then that we realized that it is, in fact, a vampire film -- or at least a film with vampires in it.

Wendigo remembered two characters, Asa and Javutich, being condemned as witches and cursing their Moldavian persecutors before the masks of Satan were hammered onto their faces. The shot of the mask being driven into Steele's face, and the mask bleeding blood (in black and white) brought back uneasy memories for him. It's about the most gruesome form of execution that he can imagine. The visceral though not gory quality of this scene set the tone for everything to come. 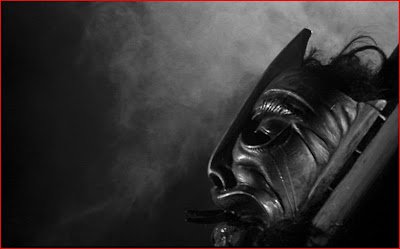 Two hundred years later, Steele plays Katia, a lookalike descendant imperiled when a visiting professor breaks the glass window of Asa's coffin while beating a bat to death, lifts the mask of satan from her eyeless and spike-pocked face, and cuts his hand on the broken glass. The blood revitalizes Asa (who wasn't burnt as she should have been in the first place because rain put out the bonfire), starting with her once maggot-infested eye sockets, but she expends her reviving power to resurrect Javutich, who still has to dig his own way out of his grave and pull his own mask off. 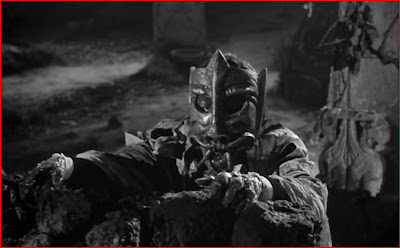 He eventually lures the professor back to Asa's crypt to watch her blow up her coffin. She mesmerizes the professor with a promise of power and pleasure and takes more of his blood. The professor becomes her instrument to avenge herself on the descendants of her persecutors, killing Katia's father before the professor's innocent assistant and a knowledgeable priest destroy him in his daytime resting place. By now Asa and Javutich don't need him any more as they aim to destroy the rest of Katia's family and have Asa herself take Katia's place. It's up to the assistant, the priest, and a helpful mob to save the day.... 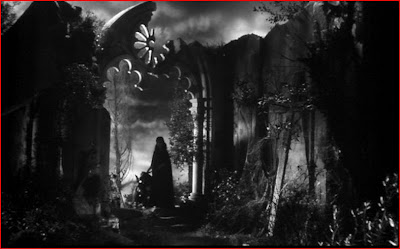 Asa's dependence upon blood, and blood's capacity to resurrect her, make Black Sunday quite like a vampire film, and by the time a victim is described as having puncture marks on his neck there was no more room for doubt. This film taps into Eastern European folklore and literature (namely Nikolai Gogol's "Viy") including the unusual detail of destroying a vampire by staking it through the literally evil eye. Wendigo may have been thrown off the scent way back when, however, by the emphasis on Satan in Bava's film. While western folklore often traces vampirism to demonic possession of corpses (hence the vulnerability to crosses and other holy symbols) the idea that vampires are primarily servants of Satan is downplayed in the Anglo-American post-Dracula tradition. There's a hint of Satanism is Hammer's vampire films, but when you hear about a "vampire cult" you usually assume that the cultists are worshipping Dracula himself or some other master vampire. Black Sunday is almost unique among movies in stressing the vampires' Satanism (though The Satanic Rites of Dracula is another obvious case), and Wendigo would even concede the point if someone would still rather see Asa as a witch or Satanist rather than a vampire. It might not be deemed a vampire film if your sine qua non is the money shot of someone biting a neck, since that never happens here. But for his purposes it's a vampire film because vampiric powers allow the villains to come back from the dead and attempt to fulfill their curse. In any event, Wendigo doesn't consider categories mutually exclusive, so define Black Sunday as you please.

European horror films are still a tough sell for Wendigo despite his admiration for some of the movies I've shown him for our series. Black Sunday goes back before Euro horror got arguably too "European," however, and his recollections made him willing to rewatch the film. He's very impressed by Bava's direction, set design and cinematography, though even this master of making the most out of limited resources couldn't do a decent bat effect. The film has a strong gothic atmosphere throughout, a visual quality Bava enhances with remarkable events like the swirling sky as Javutich whips his carriage down a dark road. It probably represents the summit of black-&-white horror, from a director who would prove only more masterly in color. It also has a human special effect in the form of Barbara Steele in her star-making performance, ably assisted by Arturo Dominici as Javutich, equally creepy masked or unmasked. Wendigo finds Steele both stunningly beautiful and frightening, thanks to those powerful eyes. Her meteoric rise to horror stardom, not to mention Bava's rise to global fame, are perfectly understandable to him based on this film. 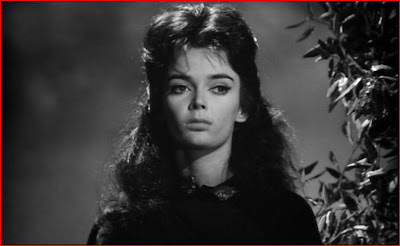 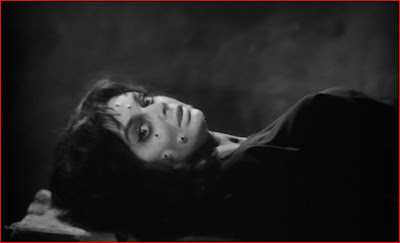 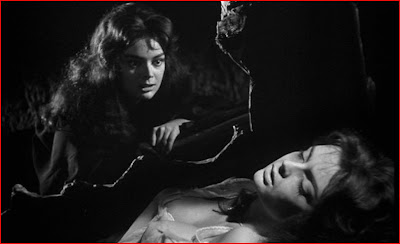 Barbara Steele: The good (top), the bad (middle), and even with the makeup there's no ugly here.

Wendigo didn't find the film very "European" because Bava didn't sacrifice narrative substance for the sake of style or sensation. Black Sunday doesn't deal in "dream logic," but tells a good old-fashioned yarn. It's more than the sum of its set pieces, while Wendigo finds many Euro horrors to be less. More to the point, it was just about as creepy as Wendigo remembers from his childhood. It's a film anyone will remember, even if disturbingly dimly, long after they've seen it. It isn't a landmark of the vampire subgenre, but it's certainly a classic of horror in general.

The American trailer was uploaded to YouTube by ennemme.

Yeah, this is Bava at the peak of his ability with B&W cinematography. The man was a master of the mise-en-scene -- the pan across the graveyard is always a great example of that. I do have to agree that he gets better with color (especially considering his magnificent use of lighting), but this would still be my #3 Bava film.

It really is Barbara Steele that, erm, steals the show here. There something deeply disturbing about seeing her face with the deep puncture marks from the mask (psychoanalyze that however you want).

Bava also did PLANET OF THE VAMPIRES (didn't check to see if you two have covered this one yet), another film with vampire undertones that isn't entirely in line with the American/British version of the vampire. In fact, I'm trying to think if the Italians ever do many distinctly vampire films at all (I, VAMPIRI...and what else?).

"He's very impressed by Bava's direction, set design and cinematography, though even this master of making the most out of limited resources couldn't do a decent bat effect. The film has a strong gothic atmosphere throughout, a visual quality Bava enhances with remarkable events like the swirling sky as Javutich whips his carriage down a dark road. It probably represents the summit of black-&-white horror, from a director who would prove only more masterly in color."

It is indeed ironic that the film most often mentioned as Bava's greatest was shot in black & white, thought I couldn't realistically imagine it any other way. This is one of the best witchcraft films (BURN WITCH BURN and CITY OF THE DEAD are also formidable entries in this sub-genre) and sustains a vivid almost painterly atmosphere of dread throughout, with the exqusite Gothic underpinning. As you and Troy both mention, Barbara Steele is an extraordinary presence, and is at the center of some of teh film's most arresting visuals. This is one film I can watch any time, any place in unlimited doses.

Is it Bava's best? Perhaps. I'll have to give that serious thought. Sveral others, including BLACK SABBATH (especially for A DROP OF WATER and THE WERDELAK) and THE WHIP AND THE BODY push close.

I'll second Troy's recommendation for Planet of the Vampires.

Black Sunday is in my opinion Bava's second-greatest film. His greatest of course being Lisa and the Devil. But I don't think Wendigo would like that one - it's very European!

good to be here, and visit through your good job of your nice site.

by the way, could you exchange my site?

this is my site:
<a href="http://http://khmernewstoday.blogspot.com/