John Gray is a local news anchorman who writes a weekly column for one of my area's newspapers, the Troy Record. In his current column he confesses that, as a kid, he wanted to be Gene Siskel or Roger Ebert when he grew up. " It wasn't until I grew up and started watching a lot of movies that I realized how horrible it must be to have to watch everything that came out," he writes. His own experience has been selective, and he prefaces his list of the 10 Worst Movies He's Ever Seen with the disclaimer that he isn't claiming that they're the Worst Movies Ever Made. As Gray explains, " I'm not stupid enough to watch "Daddy Day Care 2," "Howard The Duck" or "I Spit On Your Grave." And he probably hasn't even heard of The Room. That means we can expect an idiosyncratic list from Gray, without many of the usual suspects.

Apparently, when Gray grew up and started watching a lot of movies he never bothered watching older films. No film on his Worst list is more than 20 years old. Perhaps we should infer that he thinks They Don't Make Them Like They Used To, but this means that while his list will be different from many others, it's also inherently limited in scope. Since Gray apparently doesn't actively seek out "bad" films, we shouldn't expect to see anything that qualifies as So Bad It's Good (or at least Funny). Gray's list won't be a connoisseur's selection of badness, but a recounting of hateful filmgoing experiences, the movies that entertained him the least. 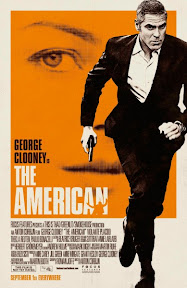 As my headline has already told you, the joker in Gray's deck, the choice that throws his standards into question, is Anton Corbijn's Euro-set chamber thriller The American, a film I feel defensive about because I happened to like it quite a bit. Here's what Gray says about it: "George Clooney is a hit man who travels to Italy to sleep with hookers and drink coffee. Oh he also stares out the window and frowns a lot. I'm not kidding, that's the whole movie." Since Gray goes on to reveal that he's included two films on the list -- The Girl Next Door and Showgirls -- despite having never watched them in their entirety, I have to wonder whether he spent a lot of time in the bathroom during The American, or whether he simply zoned out during the parts that didn't involve whoring, coffee drinking and frowning.

Gray doesn't enumerate his list, though we can guess from his saving it for last that the Worst Film He's Ever Seen is none other than Ron Howard's firefighting melodrama Backdraft. Of that he says, "I know I'll take heat for this (no pun intended) but let's be real. Macho firefighters punching each other and running into burning buildings with no masks on. Sex on the fire truck as it races to a call and a creepy arsonist who says things like, 'Did the fire look at you?' and 'Did you dance with the animal?' I was looking for the fire exit to escape this movie."

Backdraft certainly was a bad movie -- I have more memories of the Universal Studio theme-park attraction than of the film itself -- but it's also an unusual choice for The Worst, especially when Showgirls,a more predictable choice, is also on Gray's list. Speaking of which, Paul Verhoeven is implicitly the Worst Director in Gray's book, since Starship Troopers also made the roll of dishonor, and no other director is represented twice. If there's any overall bias on Gray's part, it's against cheesy sci-fi involving aliens or oversized animals. Anaconda, Deep Blue Sea and Independence Day also live in infamy for him.

I was intrigued by this contribution from someone who doesn't claim expertise in cinema and has a pretty unambiguous notion of badness. Some regular readers of this blog may dispute not only The American but other selections, or some of those if not the Corbijn film. "Bad" and "Worst" remain slippery categories for moviegoers, with an objective consensus on the least entertaining films an impossibility. People are entertained by so many different, contradictory things that there's probably always someone out there who enjoys something that someone else, if not everyone else, despises. Gray doesn't like to have his intelligence insulted by implausible special effects; many movie fans are more indulgent, just as some can contemplate The American with more patience than Gray cared to employ. The pursuit of the Worst films continues to fascinate me because of its paradoxical nature. Many people still seek out the Worst expecting to be entertained by them, while the objective Worst, I still believe, must be that film, whether it currently exists or not, that entertains no one. The mystery of Worstness is inextricably intertwined with the mystery of entertainment itself, and I can't help finding it entertaining in its own right.
Posted by Samuel Wilson at 1:22 PM

"George Clooney is a hit man who travels to Italy to sleep with hookers and drink coffee. Oh he also stares out the window and frowns a lot. I'm not kidding, that's the whole movie."

If this guy ever gets around to watching something that's 40 years old, I hope it's HARD CONTRACT.