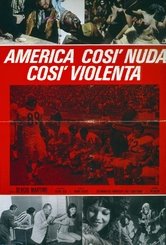 After Riz Ortolani scored a global hit and earned an Oscar nomination for "More," the theme song for the genre-defining Mondo Cane, it became a convention of the "mondo" genre of episodic, dyspeptic and salacious quasi-documentaries to have a sweepingly romantic theme song, ideally with English lyrics and optimally with music by Ortolani himself. Director Sergio Martino had to make due with the not-contemptible Bruno Nicolai, and in English this is what they came up with for Naked and Violent:

Look away...from misery,
From bitterness and hate,
And poverty...
And men who cannot wait
For you,
Anymore.

Look away, sweet Liberty,
From what you cannot see,
But Liberty,
You swore to set men free,
So why, tell me why,
Look away?

Probably no other national cinema has been so fascinated by the United States -- made so many films set there -- as Italy. America...cosi nuda, cosi violenta (America, how naked, how violent) is contemporary with spaghetti westerns and with mondo innovators Jacopetti and Prosperi's slavesploitation apocalypse Goodbye Uncle Tom, while later in the decade it was almost a ritual obligation for zombie and cannibal films to start in New York City. Martino's mondo purports to give audiences a warts-'n-all look at America, but it clearly caters -- panders, even -- to Italians' preconceived notions of our fascinating nation...as well as their desire for a realistic exploration of naked women. For every clip above there's an obviously and often absurdly staged sex scene. We get a Las Vegas sideshow where you get to see a girl strip and dance if you hit the target with the ball; an orgy in which the participants all wear fright masks and nothing else, inhibition being easier with anonymity; a purported recreation of a Manson Family ritual involving the devouring of fresh chicken blood with a side of melted wax on a naked woman's torso; and that mondo standby, painting on live, naked female canvasses.

Mondo movies have an obligation to offer pretentious moral or sociological commentary to legitimize their more sexploitative elements, and the sex scenes in Naked and Violent arguably advance the film's apparent thesis that Americans have grown so alienated from each other and from nature that they simply can't associate with one another in any normal, natural way. Americans seem to role-play in every aspect of their lives; both NFL football and drag racing are described as atavistic re-enactments of old-time rodeos (so what about modern-day rodeos?), while blacks, in a sequence possibly more racist than anything in the controversial Goodbye Uncle Tom, are shown reverting all the way to primitive Africa in a booga-booga dance and circumcision (?) rite of Martino's likely imagination. Some people are so incapable of forming relationships that they have to rely on sex dolls for company and comfort.Traditional kinship ties have deteriorated to the point that the elderly who can't afford to settle in admittedly paradisaical Florida communities are relegated to rot in wretched old-folks homes, or wander the Bowery, or stagger out to Times Square to sell their blood along with the other losers. Cancer is a blessing to the elderly poor because it means hospitalization: a warm bed and three squares a day.

But there's something unnatural even to the fortunate elderly, a reversion to childishness shared with the often naked and sometimes violent hippies who attended the big Altamont concert in 1969. Martino himself lurked at the fringes of Altamont but didn't have access to the real action on stage or nearby and had no rights to the music played there. Your first conclusive proof that Naked and Violent isn't going to be all it could be is when you hear its Altamont footage scored to that lousy Look Away song. You get the same effect, though it can't be helped, when Martino interviews various Americans; their words are drowned out almost immediately by an Italian translator. For an American viewer, it's hard to shake the impression that Martino and his writers weren't really interested in what Americans were saying or singing.

Mondo in a nutshell: this scene is supposed to show Americans' denial of death's reality with a corpse getting a makeup job at an undertaking parlor, but its most prominent feature is the trio of miniskirted assistants, filmed by Sergio Martino in the glamorous manner of a future giallo master.

Back when I reviewed Martino's All the Colors of the Dark I wrote that I was going to seek out more of the director's films. At first I had his giallos in mind, but then I found that Netflix was offering this rare mondo that had been brought to my attention months earlier by my frequent correspondent, the Vicar of VHS. As a mondo fan, I had to give it a shot. As a prospective Martino fan, I was disappointed. The quasi-documentary format doesn't exactly play to the man's stylistic strengths, and Naked and Violent (his third feature and his second mondo) is clearly a cheap project. Jacopetti and Prosperi's epics will make almost any other mondo look impoverished, but this one looks objectively impoverished. Moving down the mondo checklist, it boasts some of the most hopelessly obvious staged action (all of the sex scenes and, more offensively, an episode of white-on-black violence building up to a presumed lynching) and possibly the most revolting bit of animal cruelty in the whole genre. That comes when we see some cowboy gun-nuts taking target practice on helpless rabbits hung upside-down like midway targets. The cowboys, we're told, simply enjoy destroying life, and the moralizing tone of mondo narration never seemed more hypocritical. On the other hand, the scene sets up Martino's cleverest transition, as he cuts from exploded rabbits to the shimmying tail of a Playboy Bunny at a Chicago photo shoot.

The film finally finds some redemptive potential for America in its discovery of a little city built for the care of mentally handicapped children. The caregivers and their unselfconscious charges presumably exemplify the instinctive, unconditional bonds of affection the filmmakers failed to find elsewhere in the U.S. But Naked and Violent actually closes with a recitation of some purported blues poetry imploring the Statue of Liberty to "put out your light," "turn your back to the ocean" and "put a little love in me." This ties in (I guess) to the Look Away song, and I'm going to take another guess that it all means that Americans need to turn inward and deal with their hang-ups without taking them out on the rest of the world. A scene near the end of soldiers on leave embracing their wives in Hawaii helps make that point.

A mondo movie with the U.S. as its subject will always have some interest, just because of the novelty of presenting America as the exotic, decadent nation. Naked and Violent doesn't make the most of the premise's potential, but it'll retain historical interest for its conjuration of fact and fake into an America of the Italian imagination.

A shame Luigi Vanzi's AMERICA PAESE E DIO aka SO THIS IS GOD'S COUNTRY hasn't made it to dvd yet.This one is very similar to Martino's effort and a much better film in my opinion.Look out for the beautiful digital sat copy circulating amongst traders.

Thanks for the tip, Stephen. Vanzi's film isn't even mentioned in Mark Goodall's Sweet & Savage, my bible for mondo films. Naked and Violent was only mentioned in passing in a couple of sentences. I shouldn't be surprised if Vanzi's proved the superior film.