Part of my real-life job is a 100-years-ago-today column. Reading my local papers from the early 20th century, I've noticed something about their crime reporting. If immigrants were involved in a crime, especially a violent one, editors would let you know in the headline. Crime was identified with ethnicity in a manner that wouldn't be accepted today. One day you might see, "ITALIANS IN STABBING AFFRAY" or "ITALIAN SOUGHT IN MURDER" or similar variations on the same motif. The papers in my town probably weren't exceptional about this. That kind of reporting probably created a certain expectation when Reginald Barker's early feature film, co-written by Thomas H. Ince and distributed by the fledgling Paramount company, arrived in theaters nearly 96 years ago, in January 1915.

The Italian is a star vehicle for its lead actor, George Beban. "GEORGE BEBAN in THE ITALIAN" headlines every title card, and Barker introduces the actor before the story actually begins with some self-conscious theatricality. After the credits run, a curtain parts to let us into Beban's study, where the actor is looking for something to read. He finds a novelization of the film we've already begun to watch and settles down to peruse it. At first, this seems like a quaint gimmick, but when we return to the framing device at the end of the picture, we realize that Barker and Beban have a point to make. We're invited to see the actual story as Beban's imagination of the story he's reading, inserting himself into the narrative in the title role. Without a word, he's inviting us to walk a few miles with him in an Italian immigrant's shoes. He's inviting his audience to empathize with the Italian.

In the narrative, Beban plays Beppo Donnetti, a Venetian gondolier in love. He may be poor, but he enjoys life and enjoys the land he lives in. The first surprise for the original audience may have been the extent to which Barker idealizes Italy. He emphasizes the beauty of the landscape, admittedly enhanced by the presence of a pretty girl, with a quality of cloudscape cinematography I hadn't thought possible in 1914. Throughout the picture, Barker's direction has a fluency in framing, staging and editing that makes even D. W. Griffith look crude. His Italy may be romanticized, but the point seems to be to refute nativist notions that immigrants living in American poverty and squalor must have brought a squalid lifestyle with them from the old country. Not so: Beppo could well have stayed in Italy and lived a happy life, except for romantic complications. His girlfriend's father wants to marry her off to a crabby old merchant. Dad wants a son-in-law who can provide for his daughter. Beppo can't compete with a merchant on a gondolier's wages, but the father is willing to give him a chance -- a year, actually, -- to prove that he can make good enough for the girl. For Beppo, America is the land of quick opportunity, or so he hopes. 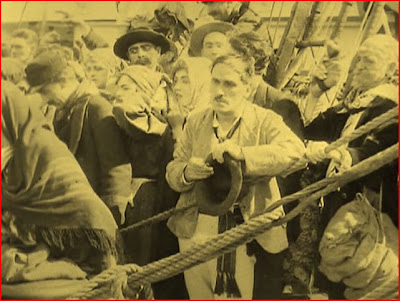 Barker makes clear that immigrants can make princely sums in America by the standards of their home countries. A little patronage doesn't hurt, either. Beppo has no real prospects when he arrives in New York, but he happens to pick a lucky corner to start out as a bootblack. One of his regular patrons is the local ward boss, who decides that Beppo is someone who could help get out the vote for his candidate. Between what he makes shining shoes and whatever he gets to keep from the walking-around money, Beppo can afford to send his girl a ticket for passage to America well in advance of her father's deadline. He may not have made his fortune yet, but he's won his girl -- though you wonder what she thinks she's won when she sets up housekeeping in a filthy ghetto tenement that makes her dad's place look like a gingerbread house by comparison. 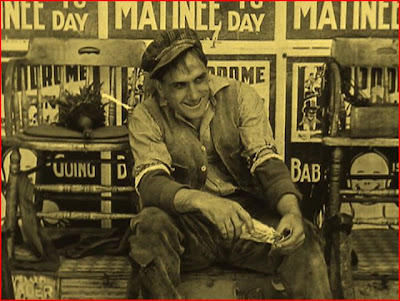 One artistic flub in The Italian is the fact that, while the New York part of the story covers at least two years, the advertising art at Beppo's bootblack station never changes.

Things go downhill from here. Mr. and Mrs. Beppo have a baby, but the baby sickens on unpasteurized milk. Unsanitary conditions in their flat obviously didn't help. A doctor tells Beppo that his baby's life depends on buying pasteurized milk, but he gets mugged on the way to the market. Desperate now, he begs the ward boss for money, but the pol isn't interested. In a melodramatic touch (and an impressive stunt) Beppo clings to the door of the moving car, imploring the boss until he's kicked into the street and into the path of traffic. After a lucky escape, he confronts the muggers and fights to reclaim his money, but when a cop arrives Beppo is arrested for disorderly conduct. A contemptuous cop crumples up the note he scribbles to his wife, so that she has no idea where Beppo is as the crisis comes for her son. By the time he's released a few days (or weeks?) later, we've already seen a grim funeral procession, a little casket being taken from the flat to a hearse. 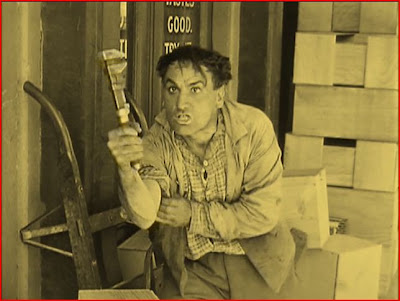 One bad day can have terrible consequences, as Beppo is about to learn. 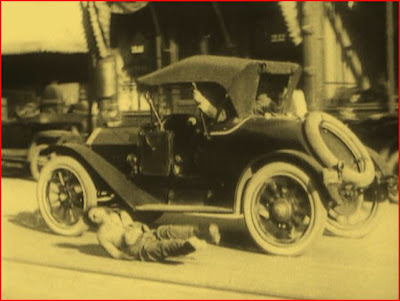 Some time later, an embittered Beppo reads that the boss's child is gravely ill with "brain fever." Blaming the boss's neglect for his own boy's death, Beppo plots revenge. With perhaps unlikely stealth he sneaks into the boss's home just as the doctor tells the boss that the sick child must have complete isolation and silence if he's to recover. Beppo slips into the child's room and is about to stave its skull in with a lampshade when he notices that the kid sleeps with his little fist tucked beneath his chin. Just as Ethan Edwards in The Searchers remembers the way he lifted little Debbie when she was an innocent child and cannot kill the grown squaw, Beppo remembers that his own child slept just this way. Overwhelmed with empathy, he can't carry out his revenge. We last see him mourning anew at his boy's grave...and here George Beban closes his book, stares at the ceiling and sighs as the curtains close.

William K. Everson first tipped me off to the existence of The Italian in his great history American Silent Film. It's been released on DVD on a twin bill with the 1913 Traffic in Souls as Perils of the New Land. That disc is a recent acquisition of the Albany Public Library. Everson touted Barker's film as a recently-rediscovered masterpiece. Judging The Italian by the standards of its time, he did not exaggerate. It's the earliest American feature film that I've seen that I can call a classic.
Posted by Samuel Wilson at 3:57 PM

I am going to have to search this film out. I love these kinds of films that track the immigrant experience and being Italian-American I have a special affinity of this particular one. In Peter Bondanella's book HOLLYWOOD ITALIANS, he explains a couple of interesting points which I hope you do not mind me sharing.

The opening and closing showing Beban as a upper class man reading a novel was done to "protect" his reputation i.e. he is not really a lowly Italian. Apparently though, Beban did empathize with the immigrants because he insisted that the film's title be changed from 'The Dago" to "The Italian." The Venice, Italy scenes were filmed in Venice, California and the New York City scenes were filmed in San Francisco. He also points out that while Beban may have emphasized with the immigrants the film itself sends mixed signals reflecting many of the prejudices and ignorance of Italians by Americans of that time who were skeptical of the arrival of foreigners into the country, and yet treats the main character with dignity and not as a clown. The author agrees with you assessment of the film's worth as a work of art and also views it as an important document of social history.

John: Wikipedia picked up some of Bondanella's info for its entry on The Italian. There's another interpretation of the framing sequence that reads it as explaining Beban's decision to make the movie. As my newspaper-reading experience tells me, "Italian" itself was a provocative word in some contexts, but having the choice between that and "Dago" suggests that either way, the filmmakers, including Beban, meant the film to challenge the stereotype of the Italian immigrant as a born-and-bred criminal.

I should warn you that the title cards may disturb you. While the dialogue for the scenes in Italy is all in perfect English, whenever Beppo must talk to an American his dialogue is rendered in "spicy meatball" dialect. This may be meant simply to show that his English is imperfect, but Italian-Americans might still take offense.

Thanks Samuel! Bondanella actually mentions the broken English 'dialogue' in his book and was okay with it saying he felt that the title cards "mimic the kind of Pidgin English that would have been spoken by Italian immigrants."