As a rule, I don't review movies after missing the first half hour, but when you see what I saw while channel surfing past Turner Classic Movies this evening, it bears mentioning. What I saw was Glenn Ford and Edgar Buchanan, a westerner and his sidekick, climbing up a ridge. On the other side of the ridge are two prospectors mining gold. Buchanan shoots both of them in cold blood. He climbs down, looks inside a cave and tells Ford about the trove they've found. The report of a rifle tells us that Ford has just shot Buchanan down in cold blood, in the back. Ford proceeds to dump the three bodies into a crevice. We see the bodies pile up, one on top of another. The gold is all Ford's.

All right, Lust for Gold; you have my attention.

The director is S. Sylvan Simon, who may be best known for directing Red Skelton comedies. This is his last film as a director; he'll be dead at age 41 two years later. The screenplay by Richard English and Ted Sherdeman is based on a book by the pseudonymous Barry Storm (who becomes a character in the film; the real man sued the studio) that purports to recount the discovery of the Peralta treasure in the "Lost Dutchman" mine by Storm's grandfather, the Dutchman himself, Jacob Walz (Ford). The screenwriters add to the Walz legend a noirish plot involving Pete Thomas (Gig Young) and his wife Julia (Ida Lupino), who hope to manipulate Walz into revealing the location of the mine, the secret the whole town covets. Theirs is a risky game, since Walz is a volatile brute. Tossed out of a bar in mid-bender, he vows that, if they won't let him back in, he won't let anyone out. He blasts away at the door until the mickey the barkeep slipped into his last round kicks in. It's Julia who drags Walz into her bakery and puts him to bed for the night.

Julia is just supposed to win Walz's confidence, exploiting their common German ancestry, while pretending to be estranged from Pete. The plan works well enough that Walz, who has cleaned himself up for courting purposes, decides to go back to the mine for fresh gold to pay for a divorce for Julia. Pete can't restrain his jealousy, however, while Walz can't fully shake his suspicion of everyone. He stumbles upon the Thomases in a clinch, part of Julia's insincere attempt to win back Pete's confidence. After consoling himself with booze, Walz plans his strategy. He gives Julia a map to the mine, fully expecting that Pete will come along. He stalks them along the way and shoos away their pack animals while they descend into the mine opening. He then besieges the unhappy couple with gunfire and loose boulders (!) until the Thomases are out of ammo and fading from thirst. He taunts them, tossing them a canteen of water and then shooting it to pieces while they fight over it. Finally, Julia stabs Pete in the back and tries to climb up to join Walz, insisting that her act of murder has proven her love for him. Cue the EARTHQUAKE!!!

Here's where missing the opening left me at a disadvantage, since only now did I discover that this was all a story told in the present day by Barry Storm (William Prince) to a local sheriff and his deputies. Storm, Walz's grandson from a failed marriage prior to his discovery of the mine, hopes to find the fabled treasure. He isn't the first to look since the earthquake; many have died looking, some very recently. In a florid narration ("the ground gave out from under me like an unfaithful friend") Storm describes his trek to Superstition Mountain, where one of the deputies (Will Geer) is waiting for him. The deputy has been hunting for the treasure for years, and killing rival treasure seekers. This revelation sets up a brutal fight scene on a high cliff, combining suspenseful location footage and rugged action from the stars and their stuntmen. Deputy Geer has the upper hand and is about to kick Storm off the precipice when he's BITTEN BY AN F'N SNAKE!!! The second unit then sends a dummy off the cliff, while the sheriff (Paul Ford) and his remaining deputy (a grammatically correct Jay Silverheels) retrieve Storm, who then sets to digging -- in vain. The film closes with Storm inviting anyone interested to take their shot at finding the Dutchman mine. 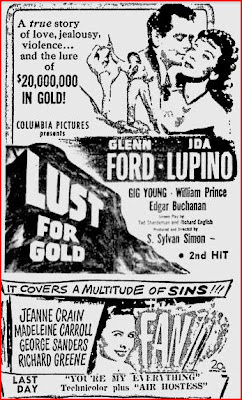 Lust For Gold is a kind of missing link in the evolution of the "adult western," appearing a year before the breakthrough of 1950 (three Anthony Mann films plus Henry King's The Gunfighter) while showing the lingering over-the-top influence of David O. Selznick's Duel in the Sun (Simon's title is unwittingly evocative of Duel's unofficial alternate title, "Lust in the Dust") and an echo of Treasure of the Sierra Madre. The outdoor action (some of it studio-simulated) seems to anticipate the naturalist expressionism of Mann's westerns, but Lupino's crawl up the mountain also evokes Jennifer Jones's death march in Duel. There's an excess to Lust (boulders, earthquake, snake) that has to be excised before the adult or psychological western achieves its characteristic Fifties style. There's also a dark ferocity to Lust that seems uncharacteristic of either its director or its star and reflects the noir influence that was more readily recognized in Mann's films. Lupino is a standard femme fatale, but her rather uninspired showing is thoroughly eclipsed by Glenn Ford's singular performance. It's been said in (unjustified) criticism of his work of 3:10 to Yuma that Ford could not play a villain. I'm not sure if Lust For Gold disproves that point, but it does show that Ford can play a monster. Jacob Walz is one of the most irredeemable protagonists I've seen in an American western, despite a play for pathos during his awkward attempts to court Julia and his discovery of her betrayal. Ford revels in savagery and smirking cruelty, and certainly further endeared himself to audiences by tinkering with a "Dutch" accent through the picture, as if he (or Simon) thought he was Paul Muni. Glenn Ford probably should rank as the number three western actor of the Fifties after James Stewart and Randolph Scott (John Wayne didn't make as many westerns in the decade as some might think), but nothing I've seen from him in the decade to come prepared me for his rampage here.

I'm reluctant to call Lust For Gold a good movie. Where Anthony Mann might have made certain scenes look epic, Simon often (though not during the climactic present-day fight) makes them look silly. The film has a wild, compelling quality to it, however. Glenn Ford's typebreaking performance and the overall viciousness of the story give Lust the feeling of a violent kick of a subgenre in its birth pangs. I'll recommend it to western fans for historical value, but movie fans in general may find it entertaining too, in one crazy way or another. It's available in nine parts (if I remember right) on You Tube, so I can check out what I missed and you can check out the whole thing.
Posted by Samuel Wilson at 10:25 PM

I've never been a western fan but I'm slowly developing an interest in the genre, especially after seeing Anthony Mann's Winchester '73. I may have to check out Lust for Gold.

D: If you haven't yet, I'd highly recommend "Once Upon a Time in the West". Although more of a spaghetti western than a "true" western, Henry Fonda puts in a mind-boggling performance as a vicious killer.

I'm quite a fan of spaghetti westerns (my favourite being Django, but I'm slowly getting into the Hollywood variety.

Funny thing. Nearly 25 years later, Glenn Ford & Edgar Buchanan would team again, this time on TV, in the short-lived "Cade's County", with Ford in title role, and Buchanan as his sidekick.