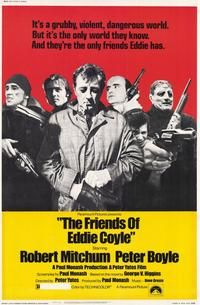 Read the novel by George V. Higgins or watch the movie adaptation by Paul Monash, directed by Peter Yates, and it's like you have the Rosetta Stone in front of you. It's as if you've found the proverbial missing link grazing on the savanna. Cinematically you have Robert Mitchum and his whole film noir heritage integrated almost seamlessly into Seventies cinema. Add a remarkably faithful screenplay and you may get a glimmering of what I'm getting at. But go back to the novel (Higgins's first) and it really hits you. The dialogue is the key. It's discursive, digressive, anecdotal, and Higgins tells his story almost entirely through this kind of dialogue. Let me give you a sample:


"Now there is a strange thing," he said, "When I came up here I more or less take the long way around, to see if anybody else is interested and who that might be, you know? So I walk along and then I cross the street and come on back down past the pair of them there and the woman says: 'Unless you accept Jesus, who is Christ the Lord, you shall perish, perish in the everlasting flames.'
"Now who am I to think about a thing like that, can you tell me that?" Dillon said. "Couple weeks ago these two gentlemen from Detroit came in and had a couple of drinks, and then they sort of look around and the next thing I know they inform me that we are going partners. They give me some time to think about it, you know, and while I think I make a few phone calls. So that when the few minutes are up I had maybe six or seven friends of mine in there and I took the opportunity to go out in the back and get a piece of pipe that I keep around. I hit them a couple of good ones and we throw them out in the street in front of a cab.
"Then two nights ago I get five of these Micmacs come in, real Indians, for a change, and they have a little firewater and begin to break up some of the furniture. So me and a few friends hadda use the pipe on them. "So this broad hollers at me there, just a few minutes ago, about the everlasting flames, and I consider myself a fairly intelligent guy and all that, pretty good judgment, I get drunk once in a while now and then, but I got this strong idea that I would like to go up with that piece of pipe under my coat and say: Well, what do I do about those fellows from Detroit, you want to tell me that? The Indians too. Jesus going to punish me for that? And then whack her once or twice across the snout to bring her to her senses."

Remind you of anything? How about this?


"He didn't show up," Foley said, "I sit there for about half an hour, and I have a cheese sandwich and a cup of coffee. Jesus, I forgot how bad a thing a cheese sandwich is to eat. It's just like eating a piece of linoleum, you know?"
"You got to put mayonnaise on it," Waters said. "It's never going to have any flavor at all unless you put some mayonnaise on the bread before you put the cheese on."
"I never heard of that," Foley said, "You put it on the outside, do you?"
"Nah," Waters said, "you put it on the inside. You still put the butter on the outside and all. But when the cheese melts, there, it's the mayonnaise that gives it the flavor. You got to use real mayonnaise, though, the stuff with the eggs in it. You can use that other stuff that most people use when they say they're using mayonnaise, that salad dressing stuff, you can use it. But it isn't going to taste the same. I think that other stuff scalds or something. It doesn't taste right, anyway."

It goes on further. You shouldn't exactly have a total flash of recognition, because Higgins's style is, as I said, a kind of missing link. It might be more clear if the gangster in the first excerpt or the cops in the second started talking about movies or TV shows, but this is a matter of form rather than content. What I'm suggesting is that Higgins is like the Old Testament of the bible that is Quentin Tarantino's writing style. Higgins's style has a clear purpose. Like Tarantino, there's rarely such a thing as purely expository dialogue, just as there rarely is such stuff in real life. People ramble and digress. But in Higgins it's clear that this manner of speaking is also a form of sociability, a kind of code of etiquette. It allows people who are always on the verge of stabbing one another in the back to communicate with one another, to have something to say to each other besides that they don't trust each other. As Higgins ultimately illustrates, it's a way to shield your true feelings or true intentions. You keep up this kind of bluster to keep a man from knowing you think he's a rat, for instance, or that you're planning to kill him. It's a code that lets people act as if they're all friends when they aren't. 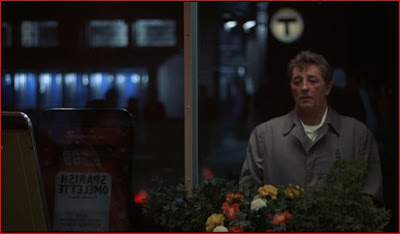 The "friends of Eddie Coyle," for instance, include Dillon the bartender, who seems at first to be an eccentric go-between who relays messages among the real criminals, and Dave Foley the police detective, who hints that Coyle might avoid a two-year stint in stir if he informs on some of his other friends. Dillon and Foley are friends as well. Some more friends of Coyle are the gang of bank robbers for whom he's buying stolen guns. More like an acquaintance is Jackie Brown (see!), from whom Coyle buys the guns. They might be friends, but Brown has got to prove himself, and Coyle is the kind of friend who might pay for his guns but then tell the cops that Brown has machine guns to spare for sale to student radicals. 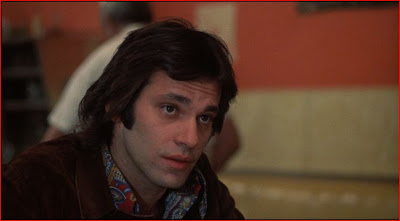 Steven Keats as the original Jackie Brown
If Foley is a friend, that might be enough for him to convince the judge up in New Hampshire to go easy on Eddie. If it isn't, or he isn't, Coyle has other friends he could mention. But he's never the only person out to share information with friends, though he might be the one you want to blame when The Man says someone should pay. And yes, this is the 1970s, and there is someone called The Man to whom the wiseguys answer. Don't doubt that The Man gets his way, either. 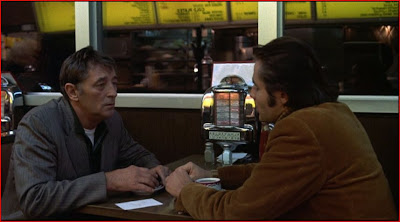 Eddie Coyle is a lifelong loser down to his last chances. He's a little older in the movie than in the novel, and Robert Mitchum is a few years older yet than the character he plays. This is one of his Seventies performances that proved that Mitchum could still bring it, but it's no star turn. Coyle is no hero, though the film makes a little more effort to make him sympathetic by showing a little more of his home life than Higgins does and emphasizing more the prospect that imprisonment would mean his family goes on welfare. Mitchum brings authority to the role while demonstrating that Coyle has no power to speak of. Second-billed Peter Boyle seems like the only person who could play the Dillon character from the novel (though the Criterion liner notes state that Monash and Yates originally wanted Mitchum for that part). They're supported by a bunch of familiar Seventies faces, including Richard Jordan as Foley and Alex Rocco as the lead bank robber. 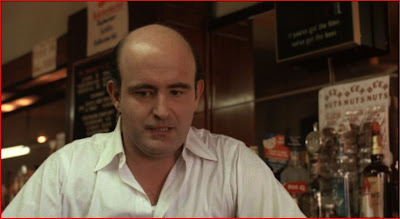 Having read the novel over the weekend and watched the DVD tonight, I can say that apart from some structural alterations this is one of the most faithful adaptations of a novel that I've ever seen. The dialogue is just about all straight from the novel, though a pre-Tarantino sensibility makes it inevitable that Monash cuts bits that might have stayed in now. Some added elements include an opening-credits sequence that shows the bank robbers casing the commute of a bank manager and an abortive car chase (perhaps mandatory from the director of Bullitt) involving Jackie Brown and the police. The only noteworthy omission is a change in who actually rats out the robbery gang, an alteration that virtually eliminates one of the novel's very few female characters while making a major male character more of a villain than he already was. The essence of Higgins's story remains the same: in an underworld of constant deal-making and double dealing, any slip can be fatal. You won't know it from the way people talk to you, but you're finished. 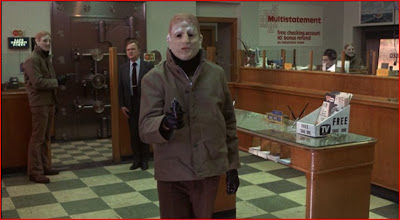 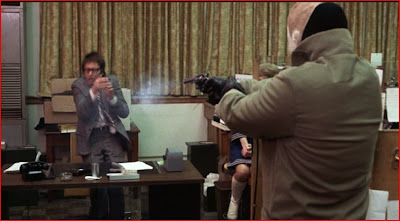 With the story very fresh in my mind, I didn't expect to experience much suspense during the film, but Yates and editor Patricia Lewis Jaffe do a great job elaborating on Higgins's descriptions of the robberies and the stakeout that nabs Jackie Brown. The action scenes are crisply done, even with the violence kept to a minimum, as in the novel. The location work and Victor J. Kemper's cinematography are outstanding. I always get a kick out of period actuality footage, and whether we see an old-school strip mall or the old-school Boston Garden with the "Broons" playing and Mitchum and Boyle in the crowd, it's all a bonus as far as I'm concerned. 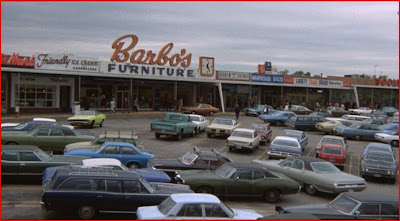 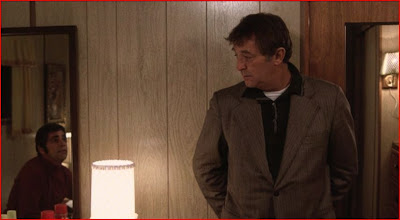 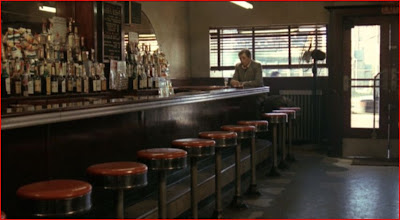 Pictorially speaking, it's a Criterion disc, so draw your own conclusions. There might have been more extras beside a still gallery and Yates's commentary track, but I guess I didn't mind paying ten dollars less -- I'd just gotten paid for a project and treated myself. Any fan of Seventies cinema and the American crime genre will probably feel the same way when they see this, again or for the first time.

Criterion wouldn't even spring for a trailer, but UQBAR8 found one to post on YouTube last week, so here it is.