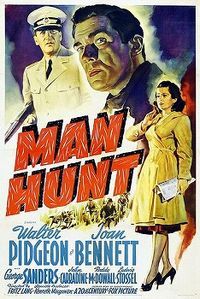 Fritz Lang is one of my favorite directors, and the best of the silent era in my opinion. From M through The 1000 Eyes of Dr. Mabuse he cut quite a swath through the sound era as well. Fox has recently released this thriller based the Geoffrey Household novel Rogue Male (later remade under its own name with Peter O'Toole starring) and the Albany Public Library has just acquired it. The book came back into print last year, but I haven't read it. I suspect the studio took liberties with the source material to make propaganda points at a time when Pearl Harbor was yet to come but preparedness was in the air and the taboo against portraying Nazism had been broken.

After an unusual title card describing the origin of the story, Lang immerses us in nature somewhere in Europe "just before the war." We later learn that the exact date is July 25, 1939. Walter Pidgeon appears with a hunting rifle and adjusts his gunsight. Looking through it, we see his target: Adolf Hitler chatting with someone on a balcony. 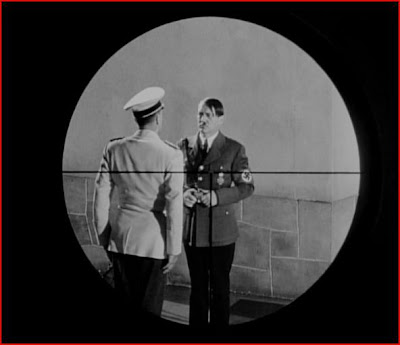 Click. Pidgeon's gun is empty. He makes a silly, unseen salute to der Fuehrer, but then gets an odd notion. He puts a bullet in the rifle and aims again, only to be discovered by a German soldier who tackles him and takes him prisoner. Pidgeon is in for rough treatment, interrupted by the godlike George Sanders as a white-clad, monocled German officer with the oddly Anglophone name of Quive-Smith. Discovering Pidgeon's movie identity of Captain Alan Thorndyke, Sanders recognizes him as a famous big game hunter. He has a hard time buying Thorndyke's claim that he had no intention of killing Hitler, but had done all this just to prove to himself that he could. It was a "sporting stalk," the only kind Thorndyke does now that he's renounced taking lives of any kind. This explanation exasperates Sanders. 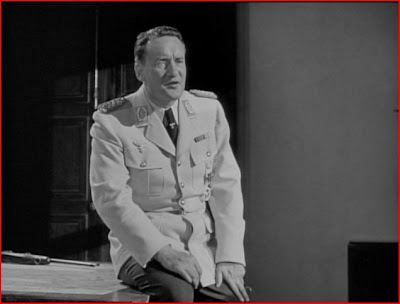 "This softness in your nature with regard to the ultimate purpose of firearms betrays the weakness, the decadence, not only of yourself but of your entire race," the officer sneers, "Yes, you are symbolic of the English race." Thorndyke will seem to symbolize more than that by the time we're done. For now, Sanders wants him to symbolize English perfidy. He insists that Thorndyke sign a confession admitting that he came to kill Hitler with the encouragement of the British government. Beatings are unpersuasive for Thorndyke because "I don't like force!" So Sanders has him thrown off a rocky ledge, intending to declare him a suicide while forging his confession. 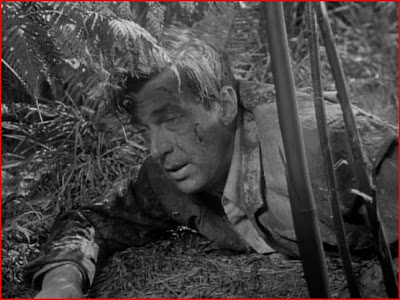 But Thorndyke was lucky, getting caught in a tree (and not impaled), then managing to cut himself loose. He manages to evade Sanders's hunting dogs and somehow finds a boat to take him into a harbor, where he takes refuge on a Danish freighter where master Roddy McDowall is the enthusiastic cabin boy. "My word! You seem to be knocked about a bit," the youth tells his new bedraggled friend. 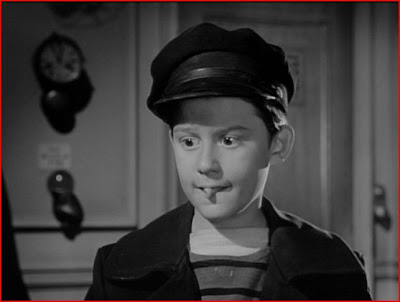 The none-the-wiser captain lets the Germans search his ship while Thorndyke moves from one hiding place to another. Meanwhile, the Krauts arrange passage on the freighter for an English traveler --one Alan Thorndyke. The real man had lost his passport, you see, and Sanders has given it to John Carradine, described by little Roddy as "a walking corpse," who has little to do here but look sinister, but looks pretty good doing so.

The cat-and-mouse game moves to London, where the film goes off the rails. The trouble starts when Thorndyke seeks refuge in an apartment from Carradine and allied pursuers. The apartment has an occupant: Jerry Stokes, a Cockney gal played by Joan Bennett. She and Lang are destined for better things in The Woman in the Window and Scarlet Street, but here, at least to me, her Eliza Doolittle accent and mannerisms are atrocious. "Ere! Oo yer callin nimes?" is a typical remark. Much of this thriller's sense of urgency falls away once Bennett and Pidgeon meet cute. Time is wasted on an allegedly humorous digression when Thorndyke takes Jerry with him to see some aristo friends. Her pluck and spunk are meant to contrast with the others' snobbish airs, and that's supposed to impress Thorndyke, but it just struck me as dueling obnoxiousness. 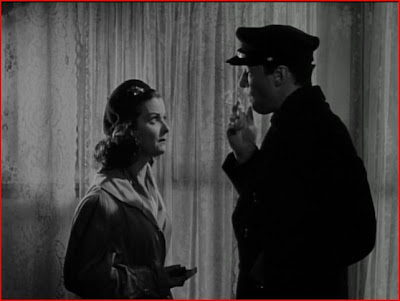 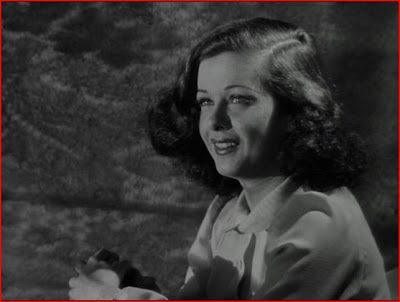 There is time during the romantic subplot for a tense encounter between Pidgeon and Carradine in the London underground, but Bennett really can't be ushered offscreen soon enough. Unfortunately, you can predict pretty easily what (or who) she'll find when she returns home. To Lang's credit, however, what happens after isn't quite so predictable, and is fairly shocking as a result -- for something we don't actually see. It sets up one more showdown between Pidgeon and Sanders in the English countryside as war breaks out in Poland. There are no sporting stalks now as out trapped hero becomes a proto-MacGyver to save himself and do what must be done to the enemy.... 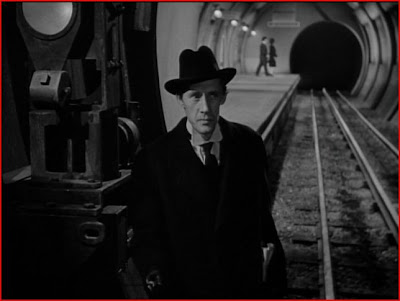 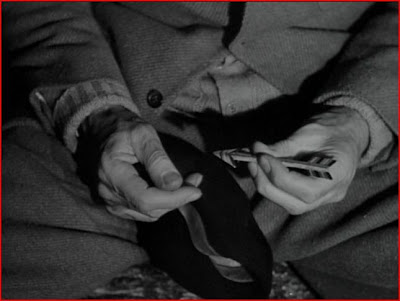 Man Hunt suffers from an imbalance of powers. Sanders and Carradine as villains are sure things, even if JC is underutilized. But Walter Pidgeon never really convinces me that he's the sort of super hunter that Sanders describes. In part that's the fault of Lang and screenwriter Dudley Nichols, who don't really deliver the amount of chase action that seems necessary to sell Pidgeon's skills. Worse, when he has to articulate the movie's propaganda points, he simply sounds shrill. Only at the end does Thorndyke do what he should have been doing all through the picture -- but I suppose I was expecting more of an action movie than the thriller Lang made. Where Lang doesn't go wrong is with Arthur C. Miller's brilliant black-and-white cinematography, which does wonders both with locations and shadowy interiors. The setting is right for some major suspense, but it never really comes off. 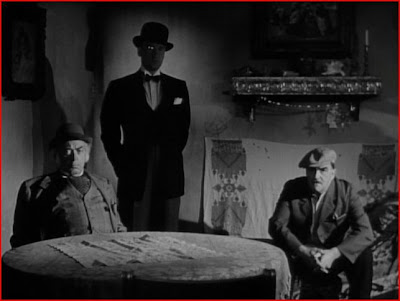 Released at a time when Hollywood no longer had to play neutral, Man Hunt ends up as an anti-pacifist film. Thorndyke could have saved the world much grief had his refined conscience not restrained him from plugging Germany's "strutting little Caesar" the first time around. Quive-Smith is determined throughout the picture to have Thorndyke admit that he meant to kill Hitler. By the time he elicits that admission and proves after going to grim extremes that our hero is indeed a killer at heart, Thorndyke has been transformed into a weapon against Hitler, Quive-Smith and all they stand for. He is last seen parachuting clandestinely into Germany with another hunting rifle as a narrator implies that, by virtue of this alone, Hitler's days are numbered. The message to American audiences was obvious enough: Hitler needs killing, and somebody's got to do it. This emphasis make Man Hunt more a document of its specific moment in history than a major work in Fritz Lang's filmography. It has it's moment despite that, and if you can stand Joan Bennett's Cockney stylings better than I can, you may enjoy the film more.

Did you ever see one of those old trailers where all the title overlays have been lost? Here's one for Man Hunt, that includes some modest samples of Joan Bennetts Crockney accent. Enjoy.

I saw it yesterday myself, as I'm doing a sort of Lang/Bennett marathon at the moment.

I think the film balances between thriller and the so-called romanticism theme very well. It’s the loss of Bennett that makes Pidgeon want to get his revenge in the end, and that was a part of the story I felt was very human and it somehow worked for the film too.

I disagree with you on your points about Bennett - I think she delivered the accent very well, and the cuteness she brings to the apparent prostitute she is playing, seen through some not so subtle scenes, is truly wonderful I thought.

Like you, what was truly impressive in this film was the film noir London city with its lighting and shadow - somehow very claustrophobic too…

I'd agree that Bennett's accent is effective if the object was to make Jerry cute, and I'll confess to less tolerance of cuteness than some have. I think I expected something a little more hard boiied than Lang delivered this time. Meanwhile, I'm off to read your review.