Peter Graham Scott's blood-and-thunder adventure can be found in Universal's Hammer Horror Collection DVD set, but that's as deceptive as the film's American title, Night Creatures. Apart from an early sequence involving the scaring to death of an arguably deserving old man, Hammer isn't out to frighten folks this time. This adaptation of Russell Thorndike's "Dr. Syn" series of novels (adapted simultaneously by Disney, with Patrick McGoohan as The Scarecrow of Romney Marsh) is more in line with Hammer's swashbucklers like The Pirates of Black River or The Devil-Ship Pirates, only with Peter Cushing starring instead of Christopher Lee. But that scene of flourescently-painted skeletoid night riders, who return to rescue Oliver Reed later in the picture, is worthy of some sort of ass-kicking horror at the drive-ins of yore. 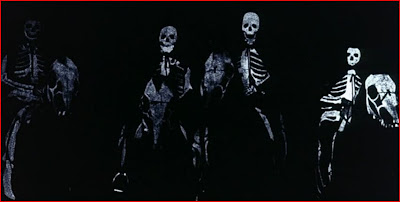 Cushing plays Rev. Blyss (his name changed from Syn to avoid legal hassles with Disney), the benign vicar of an English village that's home to an extensive smuggling racket for contraband liquor from Europe. You're immediately supposed to suspect him of being Captain Clegg, the cruel pirate skipper who is shown from behind in a prologue condemning a sailor who slept with Clegg's wife to have his tongue cut out before abandonment on a deserted island. Clegg is supposed to have been hanged, and is supposed to be buried in Blyss's churchyard, while Blyss is supposed to be the chaplain who ministered to Clegg before his execution. 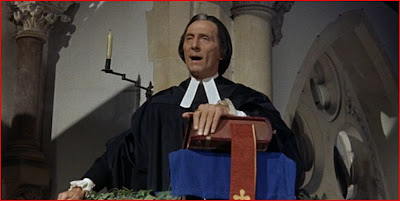 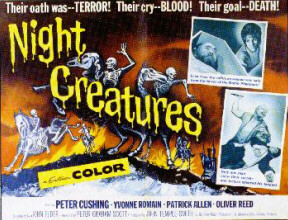 Not being familiar with the Clegg/Syn/Scarecrow story, I saw Cushing as the sort of benign character who turns out to be a vicious criminal in stories like these. And for a while I was uncertain of who would be the heroes and villains of the movie. That frightening to death of the old man made the smugglers (presuming them to be the night riders) to be rough customers and dirty dealers. But the naval detachment that comes to town looking for contraband is shown as a bunch of boors and bullies, and viewers more familiar with the Thorndike stories or English history might more readily recognize them as agents of an oppressive government. Blyss/Clegg himself is a stern leader but insists on no violence against the sailors, and is later shown to be a genuinely benevolent man in his new life, concerned for the well being of poor villagers and his own daughter, who believes herself adopted by Blyss. These are mixed signals for whether to root for him or not, but the authorities are clearly no heroes, if not villains either. The nearest thing to an unambiguous hero is Harry Cobtree (Reed), the local squire's "freethinker" son, a rival for the hand of Blyss's daughter, and more besides. It's he and his love who'll have a happy ending here, if anyone does. 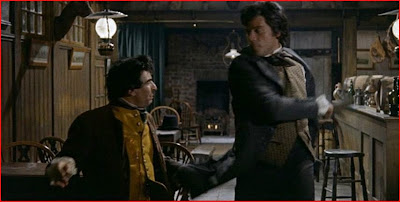 As a period adventure film, Captain Clegg is fast-paced and amiable enough, with a dynamic dual-identity performance from Cushing. It has some decent, unpretentious art direction, though it's undercut a bit by some hopeless day-for-night photography. Two things stand out to distinguish the show for genre fans. The skeleton riders I've already mentioned. The other bonus is the prominent performance by Britain's answer to Tor Johnson, Milton Reid, as "The Mulatto," the unlikely pirate who scored with Mrs. Clegg and suffered for it. He survived to be found by and become the pet and bloodhound of the naval captain who investigates the smugglers.

Reid's the nearest thing to a monster in this alleged horror film -- he even fears fire more than normal folk, for some reason. He recognizes Blyss as Clegg but can't tell anyone, being presumably illiterate; his idea of revealing the truth is to tear apart Clegg's grave to prove it empty, but people finding the empty plot simply assume that the mulatto stole Clegg's body. He ends up stalking Blyss and other enemies with a harpoon, getting into a furious brawl with Cushing's stuntman in a burning house at one point. Reid remains a wild card throughout the movie, and for all I know this was the burly and often-mute actor's biggest role. He makes the most of it and adds a lot to this film's entertainment value.

Hammer downplays the scarecrow angle in its version of the Romney Marsh story, perhaps because Disney would play it up, but the straw man does put in a few dramatic appearances.

The subject matter may make Captain Clegg too obscure or just not scary enough to be part of the essential Hammer canon for many American viewers, but I enjoyed seeing more proof of the great studio's genre diversity. The repeated reminders via DVD in recent years that Hammer did much more than horror have been great news for movie fans, and the good news in this case is that Captain Clegg is eighty minutes of easygoing fun.

Universal really plays up the terror elements for all they're worth, and more, in this trailer uploaded to YouTube by justjoined.

I love Hammer's non-horror movies from the 60s, although I prefer their exotic adventure movies to their pirate flicks. But Captain Clegg is definitely fun.

I somehow didnt even know about this film until Rob Zombie used the name in Halloween 2. Glad to read about it finally!