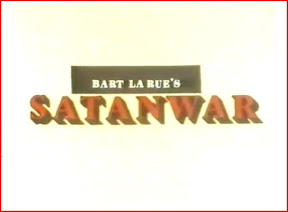 New to YouTube this week, as I learned while randomly browsing for videos, is the one and only film written and directed by Bart LaRue, a voice actor for most of his career and most recognizable in that capacity as the voice of the Guardian of Forever in the "City on the Edge of Forever" episode of Star Trek. LaRue's two lead actors made their only screen appearances in Satanwar, and that kind of singularity often means something special. In fact, "Bart LaRue's Satanwar" is a sublimely inept attempt at an Amityville Horror rip-off, a 76 minute movie with approximately an hour of plot, followed by a 15-minute Mondo-style presentation on the satanic elements of voodoo. The film proper is introduced with narration explaining that Satan's demons target not just the general population, but Christians as well. This is demonstrated through the sad "true" tale of Bill and Louise Foster, whose new home is so ghastly -- I leave the kitchen wallpaper to your imagination -- that haunting seems redundant. But when did that ever stop the Evil One. No sooner have the Fosters hung their wedding cross on the wall that the powers of darkness struggle to turn it upside down. So impressed is Director LaRue with the special effect that makes this possible that he repeats the cross stunt several times during the picture. 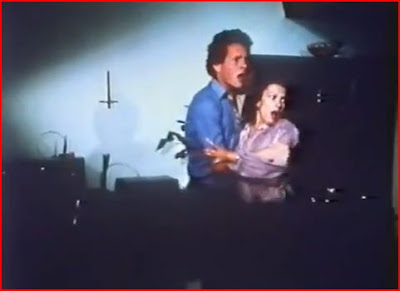 Jimmy Drankovitch and Sally Schermerhorn gasp at the military might of Satan.

Other demonic manifestations include smelly brown gunk that boils over on the stove, smelly white gunk that seeps out of the refrigerator and cabinets, and invisible hands that grope Louise in the kitchen one morning. She's terrified at first, but later she and Bill can joke about it. It might not be bad having another man around the house, hubby suggests, if he shares in the housework.

Louise: I'm not going to be molested day and night just so you don't have to take out the garbage.
Bill: Just tell him that rape, sex and molestation are my department.
Louise: ...He did have nice hands.


Satan also hits Louise in the leg with a stop-motion animated chair, sets Bill's newspaper on fire, and, in his ultimate stratagem, sends a hooded guy into the house with a knife. A timely combination of cross and revolver repel the intruder, but he's enough to convince them finally to quit the place so LaRue can cut to the voodoo. "Thus the oldest war in the universe carries on to its eternal conclusion," the narrator narrates to close this riveting empty film. It has a badness on every level that lends it a kind of inimitable authenticity. Too many people make self-consciously bad movies, but this kind of bad can't be faked. Satanwar doesn't seem to be very well known, but the GialloGrindhouse channel on YouTube is out to correct that, and you can watch Bart LaRue's definitive cinematic statement right here -- if you dare.
Posted by Samuel Wilson at 12:41 AM

This was actually LaRue's second film. The first, THE ARK OF NOAH, was a biblical documentary filmed at Mt. Ararat in 1974. It premiered in Abilene, TX on August 13th, 1975 and played churches and select theaters around the country for the next 2 years before being sold off to TV.

I appreciate the correction, as I only had IMDB and Wikipedia to go by. Most likely Satanwar was distributed similarly before getting the VHS release from which the YouTube video was derived. But I can't imagine church audiences being thrilled with that "comical" dialogue I quoted.