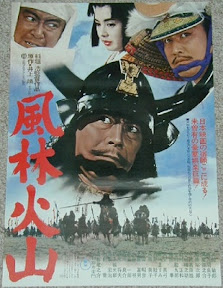 Promoted as "the biggest movie production in Japanese history," Hiroshi Inagaki's historical epic was produced by its star, Toshiro Mifune, who may have seen in the real-life protagonist a kind of antithesis of the Japanese Macbeth he'd performed for Akira Kurosawa in Throne of Blood. Mifune plays Kansuke Yamamoto, an important general of Japan's sengoku period (roughly the 16th century CE) whose ambition has shady origins but is ultimately more vicarious than personal. He's introduced in a black-and-white opening sequence in which he eliminates a creditor by convincing him to attack but spare an important daimyo as a demonstration of his skills. The film immediately shifts to full color as the incident plays out exactly as the creditor feared, with Kansuke following up to rescue the daimyo from the attacker by killing him. The shifty scarfaced ronin thus ingratiates himself with the rising Takeda (Kinnosuke Nakamura), who is quickly impressed by Kansuke's strategic acumen and his ambitious vision of Takeda's future. Kansuke persuades him to conquer a neighboring province with minimum fuss, with Kansuke himself conspiring under diplomatic cover to assassinate the rival lord. He discovers a kind of kindred spirit in the lord's daughter, Princess Yufu (Yoshiko Sakuma), who refuses to do the proper thing and kill herself. Her desire to live, even if that means becoming Takeda's concubine, strikes a chord in Kansuke, who has a similar desire to live at all costs. "I can't die, even if they kill me," he says at one point. That's because he's a visionary with an overwhelming drive to see his vision become a reality. That vision involves Takeda expanding his domain from coast to coast, at the very least.

Kurosawa's Shakespeare influence may have rubbed off on Toshiro Mifune, who delivers an ultimatum reminiscent of Henry V's Harfleur speech -- with serious props to back him up.


Strangely, Kansuke has no apparent ambition to usurp Takeda's domain; it'll suffice for him if someone achieves these great triumphs. But he'll manipulate Takeda as best he can to make him realize Kansuke's vision. Likewise, he manipulates the princess, for whom he feels strong yet repressed emotions, to make sure she bears Takeda a son -- whom Kansuke treats as his stake in Takeda's future. In an intense and disturbing scene, he takes the newborn from Yufu's arms and tells it that he, Kansuke, and not Takeda or Yufu, is the boy's true parent. For her part, Yufu has love-hate relations with both the men in her life, and probably with herself, and the film creates the impression that Kansuke has kept her alive by his own force of will, because she's part of his vision. But this samurai control freak can't master everything. In the literal fog of battle, when it looks as if all his plans will collapse, he throws himself into reckless action, charting his own course for fate separate from the outcome of war....

"I am your father!" The dark side of Kansuke's ambition doesn't exactly score points with Princess Yu(Yoshiko Sakuma, below)

Fuurin Kazan (the Japanese title is a sort of anagram of the four slogans on Kansuke's banners) is a big historical spectacle in the classical manner, and it has the air of a history lesson about it. Inagaki, who directed Mifune in the Miyamoto Mushashi trilogy of the 1950s, can handle the pageantry with ease, though his battle scenes lack the abstract clarity of Kurosawa's. He also throws in some impressionistic bits, including solarized scenes, to illustrate Kansuke's subjective consciousness and ambition. The psychology of Kansuke's vicarious ambition holds the film together, and Mifune makes the most of the acting opportunity. It's an intense lead performance from a period when he was starting to recede into distinguished guest-star roles and may be one of the last full-power performances he gave, down to what had become a stereotypical human-pincushion finish. At the same time, producer Mifune gives Yoshiko Sakuma every opportunity to make a strong impression as the princess, a woman who seems like Kansuke's soulmate, but is probably doomed for just that reason. By comparison, Nakamura is underutilized as a malleable authority figure, but his star power keeps Takeda from being blown off the screen and keeps Kansuke's singleminded yet self-serving subservience to the lord plausible.

Mifune biographer Stuart Galbraith IV reports that Fuurin Kazan was "mildly successful" at the box office but already regarded as old-fashioned even within Japan. It seems analogous to the period spectacles that were losing loads of money in the U.S. at the same time, but Samurai Banners doesn't seem like a failure to me. You might be able to imagine the greater film Kurosawa may have made of the Kansuke story (had he been willing to work with Mifune again), but Mifune had enough of a sense as a producer of his strengths as an actor and star to make the film an impressive personal vehicle and a compelling, personality-driven historical drama.
Posted by Samuel Wilson at 9:01 PM