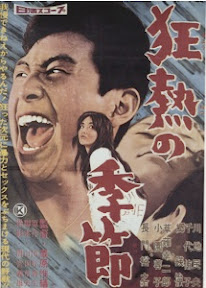 Koreyoshi Kurahara's signature film -- or so the curators of the Criterion Eclipse Kurahara collection see it -- has gone by numerous names over the years. In Japan, it's known as "Season of Heat." In the U.S., Radley Metzger released it as The Weird Love Makers before it acquired its DVD tag in a subsequent re-release. Since liner-notes writer Chuck Stephens wants to equate this film with Jean-Luc Godard's Breathless, we could give the Kurahara a more suggestive and exploitative title -- "Brainless." That's not a knock on Kurahra and his film, but an acknowledgment that its main character, the ex-con shoplifter Akira (Tamio Kawachi) is an utter malevolent moron. Stephens characterizes Warped Ones as a triumph of style, and to an extent it is that, but it's also little more than the sort of juvenile-delinquent movie made in America at the same time. What sets it apart from the U.S. genre is the triumph it grants the punk at the end and the bleak message about Japan's future his triumph conveys.

Akira is alienated to the point of sociopathy. American jazz is his drug and his anthem of alienation. When someone abruptly switches off the jazz record playing at one of his hangouts, Akira goes berserk and is ready to slice the girl's face with a broken bottle before his black GI buddy stops him. Akira had earlier defended the soldier against a Japanese girl who said she didn't like "darkies." Blacks are the best, he says, because they invented jazz. After that, he goes on, the whiteys stole it, and now the Japanese imitate it. That proves to Akira that "We're the worst of all." Kurahara and screenwriter Nobuo Yamada seem to imply that Akira's enthusiasm for the American art form is an outgrowth of a national self-loathing. It is not part of any greater cultural sensibility. Akira is no beatnik, and his overall attitude toward avant-garde culture is contemptuously uncomprehending. The feeling is mutual between him and the actual would-be avant garde -- who seem more interested in classical music than jazz. The pretentious circles he travels through while seeking to get back at the reporter who got him arrested at the start of the picture regard him as a specimen rather than a person -- "What extraordinary Fauvism!" one exclaims. The others seem more civilized, but Kurahara and Yamada may consider them just as hopelessly alienated, or even just as addicted to the sensory overload that The Warped Ones tries to translate into cinema.

I don't know art but I know what I hate:
Tamio Kawachi is always a critic in The Warped Ones. 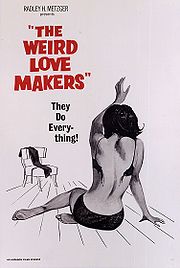 Warped Ones is highly regarded for its widescreen compositions and its frantic editing. It seems timed to the erratic rhythms of Akira's restless consciousness, but the overall effect is less a celebration of youth, or of style as an end unto itself, than a kind of horror of modernity. Akira may win in the end, for what it's worth, but Kurahara's strikes me as nearly as reactionary a film as those American B-movies that required delinquents to pay or atone for their crimes, precisely because Akira's victory means misery for others rather than any sort of liberation. But someone can probably watch it quite pleasurably without judgement, digging the unrepentant exuberance of Akira and his pals, taking it like the sort of pop drug they're hooked on. It's a fun film to watch and it is some kind of cinematic achievement, and even a sort of historic document -- but I expect Kurahara's thematic sequel (or remake), Black Sun, to top it. And as for equating it, even thematically, with Godard? Give me a break. Kurahara has a better chance of getting a fair hearing from movie buffs if we don't insist on pretentious comparisons. His boosters ought to have enough confidence in him to let new viewers watch him on his own terms.

Posted by Samuel Wilson at 8:22 PM