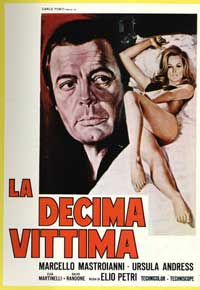 When I was a kid, Elio Petri's pop-art dystopia played a lot on local and cable TV, but I remembered little about it but the bizarre score by Piero Piccioni and the basic storyline. In the future, as initially envisioned by the American author Robert Sheckley, war was replaced and belligerent impulses diverted to "The Big Hunt," a global TV game show in which contestants had to win ten hunts, five as the hunter and five as the hunted, to earn a $1,000,000 prize. Sheckley's idea is reminiscent of other contemporary dystopian fantasies from American writers that played off fears of dumbed-down decadence; C.M. Kornbluth's Gladiator-at-Law is along the same lines. Dystopia was on the minds of more avant-garde European filmmakers as well; witness Godard's Alphaville and Truffaut's adaptation of Fahrenheit 451. So La decima vittima splits the difference; like Fahrenheit 451 it's a synthesis of American dystopian anxiety and ambivalent Euro futurism. Unlike Truffaut, Petri and his team of writers keep tongues in cheeks. Tenth Victim (so called presumably because Sheckley's title, "The Seventh Victim," had already been taken by Val Lewton back in 1943) is a comedy above all, in the satiric dystopian tradition. As a satire, it's short on sympathetic characters, so it has to be very funny or else offer compensating features. Ursula Andress in a bra that fires bullets is a good start. 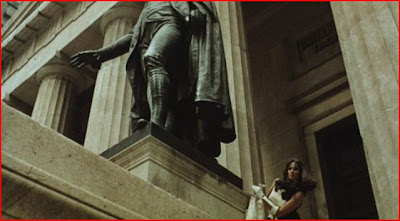 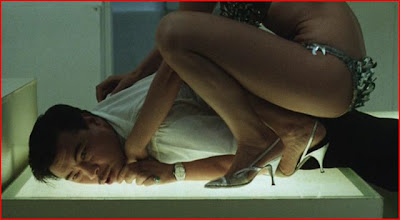 The film opens with some location work in New York as an Oriental man (George Wang) chases Caroline Meredith (Andress) across the Brooklyn Bridge and through Wall Street until their final showdown in the white-on-white decor of the Masoch Club, where Caroline slaps her way through a host of male patrons before outgunning her pursuer. It's her ninth victory, putting her one kill away from the million. Her tenth hunt, with her target to be selected by computer in Geneva, is going to be a big media event, with the Ming Tea company aiming for maximum product placement at a perfect kill location: outside the Colosseum in Rome. Conveniently enough, her chosen target is an Italian, part-time cult leader Marcello Polletti (Marcello Mastroianni, dubbed into English by another actor), whom we see dispatching some Wehrmacht fetishist with a pair of exploding boots. Despite his success in the game, he's fallen behind in his accounts and the collection agency is taking his "classics" (a comic-book collection) away to the chagrin of Mrs. Polletti. 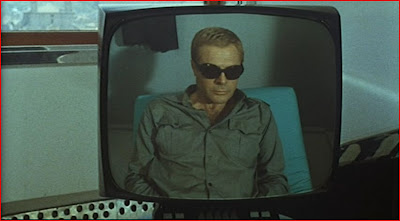 The rules of the Big Hunt require that he not be informed of who's hunting him, only that he has become the prey, but as Caroline, using her own name (don't hunters follow each other's exploits on TV?), shows up with a video crew to propose an interview with the famous hunter, Marcello can't help but grow suspicious. He seems a less enthusiastic player than Caroline, though all players are volunteers, but mounting debts and pressure from his wife lead him to act on his suspicion and propose a deal with another sponsor. He'll lure Caroline into a trap from which she'll be sprung into a pool and eaten by an alligator. But can either of these beautiful predators resist the inevitable sexual attraction between them, and if not, what will happen if neither kills the other?... 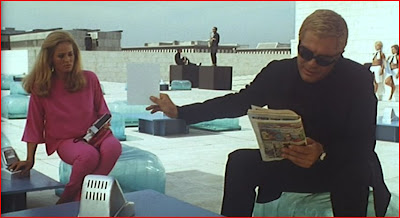 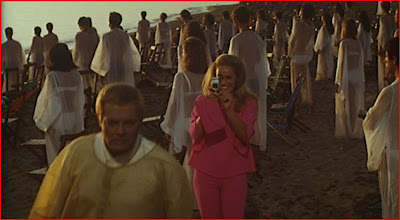 As I suggested, neither main character is very sympathetic, but Marcello has a reactionary attitude tailored to suit his national movie audience. We hear a lot about the awful things Italians won't stoop to, like turning their parents over to the state (instead, he keeps them behind a secret panel) or killing women. But there's little apart from that to endear him to the viewer, though satire requires little likability of its protagonists. Considering that Caroline is no more likable, that probably leaves most viewers indifferent to whether one or the other wins, or even to whether they should both renounce the game. I got the feeling that the filmmakers themselves weren't sure of how to wrap the story. One sequence, in which one of the stars appears to kill the other, seemed like it was once meant to end the film, but the same character bounces back moments later to resume the struggle before interlopers give the couple an opportunity to attempt a joint escape. At the very end, an ambiguous image leaves one questioning whether they've been killed or blessed. For this sort of film, ambiguity is probably the right way to bring the curtain down. 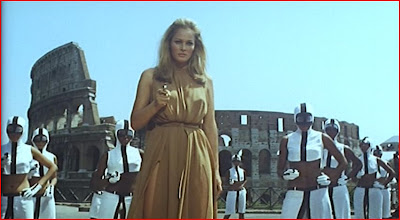 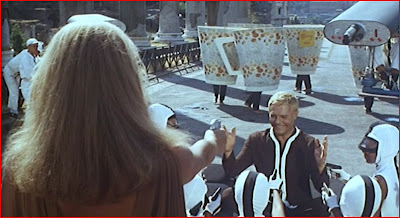 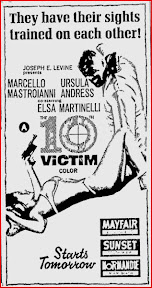 Since we sadly have a better idea today of how a show like "The Big Hunt" would actually work, and films with similar general concepts like Battle Royale and Series 7: The Contenders have arguably done them better, Tenth Victim can look naively dated as a satire. It isn't really that sharp on its own terms: a promoter argues that, had the Big Hunt existed in 1939, Hitler would have been a player and World War II wouldn't have happened, which really seems to miss the point about Hitler, for starters. It can also sometimes simply look stupid on the technical level -- if a crane can lift the dome off Marcello's beachfront shack as if the dome was completely unattached to the floor, how could that crane have moved the entire shack moments earlier? The aesthetic level, however, is make or break for Petri, and here Tenth Victim still carries a charge, both as a Pop Art period piece and as a timelessly decadent fantasy. Petri has an eye for the odd detail that enlivens his widescreen compositions, from an upside down saxophonist to a mummy-bandaged alligator handler to giant dancing teacups for Marcello's scripted death scene. Some bits will seem tacky, some downright weird, and some simply dated. But while the film has not quite proved prophetic yet -- it does take place sometime in the 21st century -- it has an innate curiosity value, like a Jules Verne novel, as a document of the past's defining vision of the future.
Posted by Samuel Wilson at 7:00 PM

I love this movie because it is tacky, weird and packed with kooky futuristic clothes that look purely 60s. I don't think I ever expected more from it. This probably because my parents had the soundtrack album and I listened that several times, and many years, before I saw the flick. I had to rent the video cassette by mail from Reel.com. It was much more exciting to watch this movie the first time because I could finally see the images that went with all those strange tunes. That definitely made me like the film more.

KC, Victim has definite artifact appeal and will keep having it. I'm surprised at a soundtrack album, since I found the score sort of offputting, which is rare for an Italian score. But the music is probably integral to its artifact appeal and its campy fun.

The music is even more offputting without the movie. The soundtrack fit in with my dad's musical experimentation in the 60s though (apparently he didn't care for the drug thing, so he had a lot of strange records instead). I listened to it a lot because I thought it was so odd. Finally seeing the movie was like solving a mystery. Maybe that's why I sort of like the steaming mess.