At long last, our tour of the Wild World of Cinema arrives in Nollywood -- Nigeria, land of what's reputed to be the world's second-most prolific national film industry. Second only to India, it reportedly produces at least 30 new feature films a week, or somewhere between 1,000 and 2,000 features annually. Nollywood is the bane of African art cinema; mostly anglophone while the most honored African auteurs hail from francophone lands; largely if not entirely shot on video on short schedules and sold direct to DVD or other formats instead of playing in theaters; aimed squarely at the LCD of superstition and reactionary family values. While "Bollywood" has earned grudging respect for sticking to a distinct cultural aesthetic, Nollywood is widely reviled as the bottom of the cinematic barrel, except by the avid consumers who spend hundreds of millions of US dollars on the stuff and have made cinema the second largest employment sector in Nigeria, after government.

Accompanied by my intrepid friend Wendigo, I made my first foray into Nollywood by stumbling across Vampire's Call during a YouTube search for vampire movies available for free online. Wendigo proved willing to examine another culture's take on vampires, especially since the film would be in English. What we found was a sometimes compelling, sometimes repelling experience in many ways reminiscent of the lower rungs of U.S. exploitation in the Seventies and Eighties, at least in terms of story structure if not in gore or sleaze. It's hard for us to say whether Kasat Esosa Egbon's film is typical of Nollywood or whether it's above or below the norm, but we have learned that female lead Stephanie Okereke is one of Nigeria's more popular actresses, an award-winning performer who has since gone on to study film in the U.S. and write and direct a film on her own. Vampire's Call, however, does not appear on her IMDB filmography. 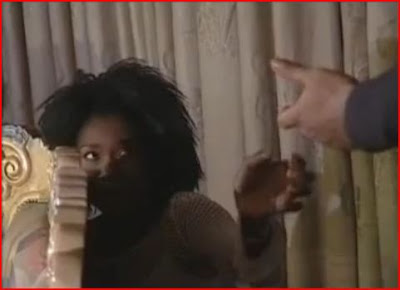 Okereke plays Lisa, a medical student returning from Britain to visit her grandparents in her home village. We learn that she's been having strange dreams that she suspects have something to do with the old country, and we note early that her avuncular elders don't want her to wander around the village after dark. A few years earlier, her cousin Vera had gone against that advice and had become one of many human and animal victims of a mysterious killer. The people have all been bitten in the neck and drained of blood, and no one in the village can imagine why. 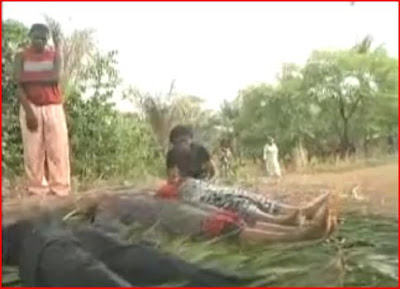 Lisa's dreams are crudely spooky. She first encounters a CGI skeleton with a glowing heart. Later, she meets a man who grows telescopic fangs and causes the sky to grow dark -- and it seems that she's seen this person before. She dreams of dancing with the mystery man in a haphazardly red-draped, throne-furnished room fit for a low-rent Count Yorga. Awake, she finds her way to the actual room, and finds the man himself sleeping in an adjoining room. Who is he? Having lived in Britain and imbibed its pop culture and superstitions, she suspects that he must be a vampire; the idea seems to have occurred to no one else in the village, despite the teeth marks. 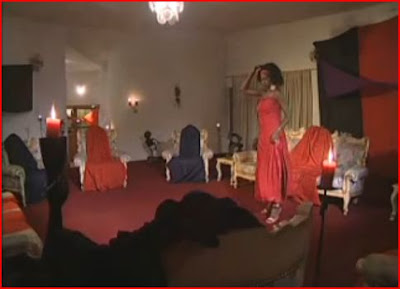 Lisa investigates a home-decorating atrocity in her native village. 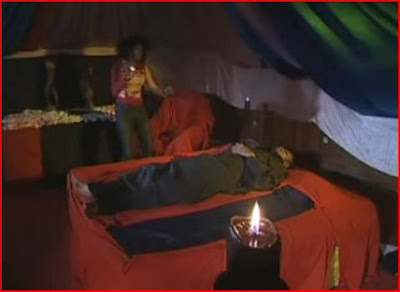 Her grandfather (Justus Esiri) finally tells her a local legend that might explain her dreams, her discoveries, and all the recent deaths. Once upon a time, in the 18th or 19th century (the villagers have firearms), the community was plagued by a strange "wild animal". How strange? Well, it's one of the crappiest CGI critters we've seen in quite a while, with a sickly repetitive bleat to match; it wouldn't even pass muster for a video game. 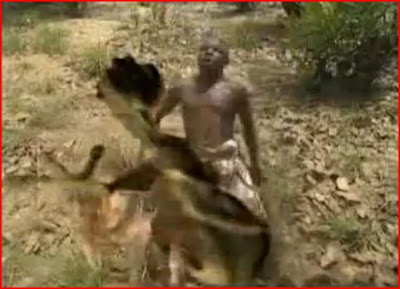 Despite appearances, it's a frightening enough beast for the elders to call out all the able-bodied young men to fight it and promise the powerful village priestess, Atunma (Miltex Ogiri), to the man who slays it. A good sized band of fighters dances its way toward the creature's stomping ground, but only one wounded warrior, Chioke (Muna Obiekwe) survives the battle. He's nursed back to health by an outcast female, Chioma (Okereke) who slowly loses her resolve never to consort with men. Chioke persuades her to return to the village with him, where he intends to marry her. But that plan slights the fierce Atunma and offends the elders who arranged for her marriage to the monster-slayer. The modern-minded Chioke, determined to marry and live for love, decides to share Chioma's exile instead. Their idyll lasts until Atunma goads a gang into beating a pregnant Chioma to death, but the victim doesn't die until she's given Chioke a son. Atunma promptly curses the child, then kills Chioke when he seeks revenge for his wife's death....and somehow the boy survives and founds a line that carries the curse to the present day. The sons of Chioke will be vampires until a woman in Chioma's image will make a sacrifice of blood to wash away Atunma's curse. 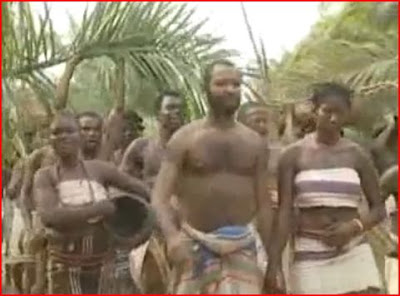 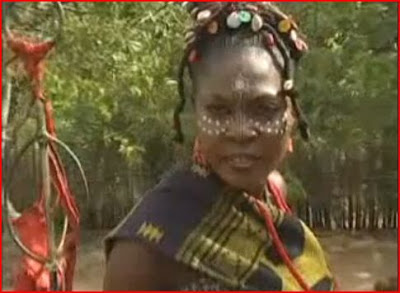 The man of Lisa's dreams is Max (Obiekwe), the cursed, murderous descendant of Chioke and Chioma. The second half of Vampire's Call (it was released in two parts, adding up to approximately three hours total) is Max's Bram Stoker's Dracula/Beauty & The Beast/Phantom of the Opera/You Get the Idea courtship of the strangely enthralled Lisa. That courtship is complicated by the arrival from Britain of Richard, Lisa's fellow medical student, erstwhile boyfriend and aspiring Ralph Bellamy of Nollywood. Lisa is torn between two lovers, or is just plain fickle. Ultimately, however, Max means to force the romantic issue, though he's more reluctant to claim the blood necessary to lift his curse. He follows the couple to Lagos and spooks the hapless Richard away, but can't bring himself to take Lisa's blood. But when he resorts desperately to attacking a stranger at the wrong place and time, whether Lisa will live or not won't be his decision to make.... 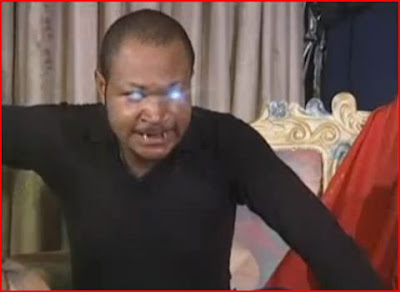 He's actually quite nice if you get to know him. 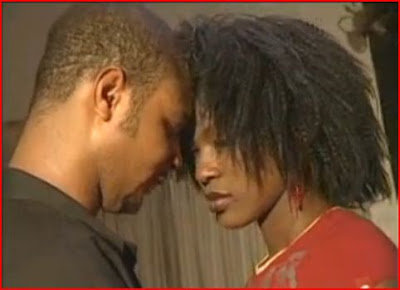 Objectively speaking, Wendigo has to say at the start that Vampire's Call is not a good film by any standard. He gives the creative team credit for ambition, but they simply lacked the talent to make their concept work. The most obvious problem with the movie is its obvious padding. To stretch the story enough to justify the two parts (Hollywood seems to be copying Nollywood lately) the director fills the film with extended scenes of people walking and watching local scenery that simply isn't scenic enough to hold our interest. The camera wanders occasionally, abandoning characters to follow a car that seems to have passed through randomly. The romantic scenes between Lisa and her two suitors go on far too long without actually evolving cinematically or building to anything like a climax. The big dance scene between Lisa and Max is interminable. A lot of these tricks reminded Wendigo of the way grindhouse exploitation films, or Seventies porn films, were padded -- but those films were padded to reach a minimal feature length. Doing the same thing to make a film three hours long is inexcusable. In some cases, he concedes, letting dialogue scenes linger long past their relevance, or showing extended folk dances, adds a feel of authenticity to the proceedings. But practically every scene rambles on longer than it should. Even worse, while Egbon wastes time on irrelevant stuff, he flagrantly omits some of the most potentially dramatic bits from the Chioke legend. We see the warriors dancing down the road, but we don't see them fight the monster. Instead of showing us the showdown between Chioke and Atunma, Egbon has grandpa flatly tell us that Chioke was killed.  Did his budget determine what he could and couldn't show, did censorship determine it, or did he simply make profoundly wrong narrative choices? It's hard for us to say. We will say that he lacks much sense of pace. That's proven when he breaks off Part 1 smack in the middle of one of Atumna's rants. Rather than give us a cliffhanger -- and it may not have been necessary, depending on how the two parts were marketed -- he doesn't even climb the mountain. 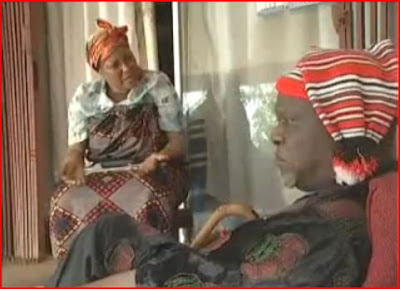 Wendigo found the first half better than the second because the slow buildup toward the revelation of the Chioke legend gave him an interesting puzzle to put together. The film succeeds somewhat in establishing the mystery of how the Chioke legend explains Lisa's dreams and the village murders, but it quickly loses momentum after the flashback ends. At its heart, Vampire's Call is a standard modern melodrama of reincarnated lost love and a reluctant monster, but Egbon found some interesting ways to transplant those motifs into an African setting. He does also manage a few effectively creepy moments in Part 2, especially when Max appears to be in two hotel rooms at once, holding separate chats with Lisa and Richard. By the time that scene happens, however, Wendigo worries that you may be ready to gnaw your arm off from boredom. The end may annoy some viewers since evil seems to go unpunished, even if it isn't evil anymore. It's almost as if Egbon forgot about all the murders he'd shown earlier -- it is a long movie, after all. Maybe he also thinks that Max isn't responsible for the killings because he'd been cursed -- but I'd like to see that defense tried in a court of law. 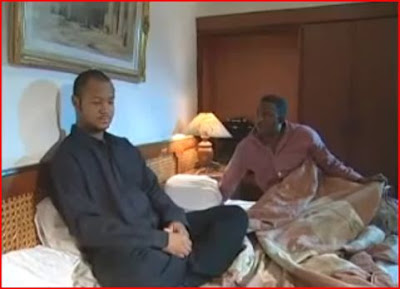 The acting is probably the best element in Vampire's Call. Both Okereke and Obiekwe succeed, sometimes in spite of the script, in creating two distinct characters in their respective dual roles, and Wendigo found Obiekwe as Max quietly menacing in a sometimes-unnerving way. As Chioke, the actor has a likable swagger as a man with attitudes ahead of his time. Even he's upstaged, however, by Miltex Ogiri as Atunma. She's built up as a formidable villainess, and you wish the writers had found a way to give the actress a character in the modern story, because she commands the screen in a way that really stands out. Overall, the actors (especially Esiri's likably grouchy grandpa) have a casual, natural style that makes some of the lengthy dialogue scenes somewhat more palatable. Some of the dialogue itself achieves a sort of poetry, e.g. Atunma's curse: "Chioke will seek tears, but they will not drop." Nollywood may simply have a more easygoing or patient approach to dialogue and character development. It's too bad that Egbon's technical skills are nowhere near the artistic level of his actors. Not only are the few attempts at effects uniformly awful, but the sound mixing may well be the worst we've ever heard in a motion picture. Library cues of howling wolves, tolling bells, crying babies are used to the point of abuse, and often drown out dialogue. 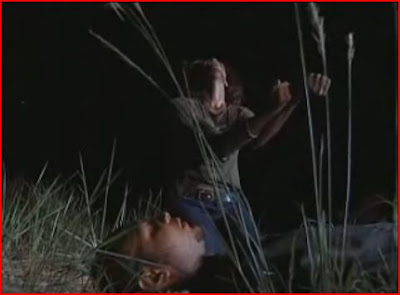 These technical shortcomings make Vampire's Call not bad in the cult sense of inspired stupidity, but simply amateurish. But while Wendigo can't call it a good film, and can't really recommend it to vampire fans, he did find it compelling enough to stick with the film to the end, despite the endurance test of Part 2. He doesn't regret the experiment with Nigerian pop cinema, and neither do I. Tourists in the Wild World of Cinema will probably find enough here that's odd, over the top, or simply strange to justify future forays into the Nollywood netherworld.
Posted by Samuel Wilson at 9:02 PM