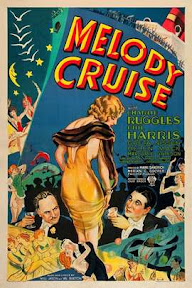 Among composers of film music, "mickey mousing" is the bad habit of synchronizing music to on-screen action, so named because that's how it was done in animated cartoons. If there's a note of music, for instance, for every step somebody takes, that's mickey mousing. Max Steiner, otherwise regarded as a pioneer film score composer (e.g. King Kong, Gone With the Wind, etc.), was also often accused of this practice, and Mark Sandrich's musical comedy for RKO would probably be Exhibit A against him. But there's a point to it. Sandrich and Steiner seem to have wanted a live-action film as nearly completely syncopated to music as Disney's early cartoons were. Melody Cruise is one of the first attempts I can think of to make, for all intents and purposes, a live-action cartoon. It's akin to Louis Milestone's Hallelujah, I'm a Bum as a dead-end attempt at a completely musical film, though Melody Cruise isn't as complete about it. After an initial, often-imitated opening sequence that tries to turn all the sounds of a city into music, and a travel-agency scene in which everyone speaks in a more-or-less rhyming patter, the film settles into prose, with occasional musical interludes, to tell the story of confirmed bachelor Alan Chandler (Phil Harris) and his married but philandering pal Pete Wells (Charlie Ruggles). Chandler is determined never to marry, but doesn't trust his own impulses. He trusts Pete to prevent the event, and as a doomsday threat to keep Pete on the job he's mailed a sealed and presumably damning letter to Pete's wife, with instructions that it be opened on the occasion of Alan's wedding. Pete's mission as they sail together becomes making sure that none of Alan's flirtations escalates beyond control, but that's complicated by two of his own girlfriends stowing away in his stateroom. He hopes to keep them prisoner by leaving them in their lingerie, and in the worst case to pass the girls off as his nieces. In the meantime, Alan develops two crushes, one on a sophisticated German girl (Greta Nilssen), another on a modest schoolteacher (Helen Mack), or as Pete calls her, a "blackboard eraser." In farcical fashion, Alan seems quite capable of messing up both relationships, but as one finally gains terminal momentum, Pete's day of reckoning, when he is literally reduced to a cartoon character -- I mean literally reduced, the way Fred Flintstone was whenever Mr. Slate chewed him out -- draws near....

That's about it: your typical flimsy platform for an RKO musical, only Fred Astaire and Ginger Rogers, whom Sandrich would direct as a team five times, are nowhere to be found. Instead, the only singer to be had is Harris, whom Sandrich had guided through an Oscar-winning short this same year, but is better known now, if known at all, as Jack Benny's radio bandleader and stooge. Young and beefy as he is here, he seems unlikely as the object of so many women's desire. Without a charismatic performer as the focus of the film, Melody Cruise becomes a stunt, a show-off spectacle for Sandrich, Steiner and the RKO technicians. If there's something inhuman (for some viewers) about Busby Berkeley's mass formations in his Warner Bros. musicals, there's a similar and maybe more profound dehumanizing effect to Melody Cruise's emphasis on sound effects, special effects and editing. This film is crazy about wipes, for instance. You don't just get lines going across the screen to shift scenes. You get all sorts of shapes, and you get starbursts, and liquid cascades. Some of these are sight-gag transitions as well. In one scene the wipe comes in from left and right, and the two halves of the new frame literally clink in the center to reveal two men toasting each other. An angry woman knocks down a vase; as it shatters a starburst wipe cuts visually and aurally to a drummer bashing his tympani. These examples are typical. Not even the musical numbers are safe. In the absence of a real female singer in the case, the song "He's Not the Marrying Kind" is shared by a small army of actresses who get no more than one line or sometimes one word to sing or speak. It climaxes with one woman per word: "He's" "Not" "The" "Marrying" "Kind." Harris's big number, "Isn't This a Night for Love," isn't chopped up as drastically, but it is abstracted when Sandrich cuts to foreign ships where the same verses are sung in German, French and Spanish.

Melody Cruise is entertaining, especially for pre-Code fans, but the overall impression is of a failed experiment, something gone wrong. It's an utterly musical film in a descriptive sense, but it also feels like a textbook example of what a musical is not supposed to be. Without a true musical performance at its core, no virtuoso belter or dancer, it's as if Sandrich can't help making a live-action cartoon, or the writers can't be bothered writing human dialogue. Two girls eavesdropping outside a closed door confide in each other, but Steiner's strings stand in for their lines. Later, in another highly-edited burst of patter-dialogue, one girl says "buzz buzz buzz," and her friend answers, "blah blah blah." For two more characters, it's "oh, oh, oh" and "ah, ah, ah." It rhymes, you see. It's all fascinating but sort of appalling at the same time, and depending on what appalls you that may make Melody Cruise a typical pre-Code product. It earns its pre-Code badge with those two girls in lingerie, but its deliberate cartoonishness is analogous with the excesses of the period against which the sensibility of "classical" cinema (as opposed to Code enforcement itself) was a somewhat conscious aesthetic reaction. In the case of the musical genre, the cartoon influence on Sandrich was countered by the humane principle embodied by Astaire and Rogers, and most film fans feel that the director was better off for the correction. But that shouldn't diminish Melody Cruise's historic appeal as one of the most aesthetically bizarre manifestations of pre-Code cinema.
Posted by Samuel Wilson at 8:56 PM