Wendigo Meets SHADOW OF THE VAMPIRE (2000) 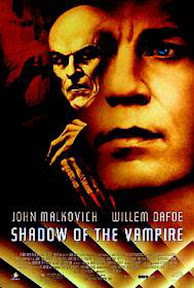 Those of you who saw us use a quote from E. Elias Merighe's movie as an epigraph for our review of the Spanish-language Universal Dracula probably figured that it'd just be a matter of time before we got to Shadow of the Vampire itself. So here we are, re-watching Merighe's alternate-universe account of the making of F. W. Murnau's Nosferatu. Wendigo and I agree that we shouldn't take the film within the film as the Murnau movie we know, nor Merighe's movie as a reflection on the historical Murnau. Once Merighe and writer Steven Katz came up with the high concept that the legendary and mysterious Max Schreck was an actual vampire (Willem Dafoe), there was no point to further fidelity to the history of Nosferatu. Thus, all "Schreck's" scenes are filmed at night when the real Murnau probably shot not a frame of film after sunset. The big "gimme" also licenses Shadow's creators to invent their own Murnau (John Malkovich), Albin Grau (Udo Kier) and cast of actors, so that their film is hardly about the making of Nosferatu, or even the mystique of Murnau's film, but some strange satire of their own art.

This isn't your great-grandfather's Nosferatu; 'outtakes' from Shadow of the Vampire.

Wendigo would say that Shadow is really a movie about movies, a meditation about the mystique of the director and the obsession moviemakers have with making movies. There's a certain narcissism to it that alienates Wendigo, who happens to be unimpressed by Katz and Merighe's implicit psychological self-criticisms. He's not much more impressed by their equation of moviemaking with vampirism, a theme announced by Greta Schroeder's (Catherine McCormack) complaint that the movie camera sucks the life out of her. The Shadow Murnau is a monster if not a metaphorical vampire, a pretentious Weimar degenerate (if not also a proto-Hitler) willing to sacrifice cast and crew for the sake of his dubious art. If anything, he even vamps the vampire, or tries to. The film's sadomasochistic Murnau gets some thrill from the power game he plays with "Schreck," who we learn was a decrepit survivor of vampirized Slovakian nobility. The main thread of the film is Murnau's struggle to dominate Schreck, rather than the vampire's ravaging of the Nosferatu crew. When I first saw the film, I took offense at a seeming insult to F. W. Murnau, but Wendigo realized before I did that Shadow is less about the real Murnau than some abstract caricature of the autocratic director, presented by Katz and Merighe with questionable sincerity.  Does Merighe really see himself, as a director, that way? Does he see directors in general that way? You have to wonder.

What's in it for Max Schreck? Katz leaves a lot implicit, but Wendigo noticed two main motivations. The most obvious one is the vampire's obsession with the actress Greta Schroeder, which itself requires some explanation. He recognizes the woman in Jonathan Hutter's locket as Schroeder and breaks "character" to identify her. How does Schreck know her? It's one of the film's most fascinating questions. I assumed initially that Schreck had to have gone to the movies, but Wendigo suggests that Murnau might have shown Schreck a picture of the woman while recruiting the vampire, and that the photos might have been enough to leave Schreck smitten.

More interesting to Wendigo is Schreck's overall interest in cinema, illustrated in a charming scene when the vampire putters with a film projector on an abandoned set. Wendigo speculates that Schreck's real interest in moviemaking is the possibility of making a permanent record of himself. Over centuries the vampire has forgotten many details of his existence, but film promises not just a permanent record but a kind of immortality that might persist beyond his eventual demise. If Merighe's Murnau is the archetypal autocrat director, his Schreck is the archetypal obsessed fan. Shadow is a tale of interlocking, codependent obsessions, in which Shreck's smittenness ultimately overcomes his survival instincts and undercuts his physical dominance of Murnau. This vampire is fatally caught in the beam of the movie projector; the sun is almost redundant.

Willem Dafoe is the first actor to be nominated for an Oscar for playing a vampire. Wendigo was impressed by his elaboration on a physical impersonation of Schreck, the additional touches Dafoe created like Schreck's nervous habit of clicking his long fingernails together, as well as the rare moments of groping memory ("It was woman" who made him a vampire) and introspection, like his critique of Dracula we quoted last month. Since he's not playing the real Max Schreck, Dafoe is licensed to create a character almost from scratch, and he makes the vampire a more complicated character than Malkovich's somewhat-typical weirdo. Dafoe doesn't have Shreck's facial structure, and under the makeup he sometimes looks more like Alexander Granach's Knock, Nosferatu's bozo-haired Renfield surrogate, but most of the time the makeup evocatively establishes Schreck's alien nature. Still, Wendigo ultimately deems Dafoe a derivative shadow, however talented, of the uncanny, irreproducible original. Neither Dafoe nor Merighe is really aiming for the pure frightening effect that Murnau and Schreck achieved, but the modern creators' greater sophistication doesn't make Dafoe's Schreck a better performance than Schreck's Orlok. As for the other notables, Malkovich is simply bad, while Udo Kier lends surprising gravitas to any scene Albin Grau is in. Given his wacky past, Kier is setting a new standard for aging gracefully.

Overall, Wendigo likes Shadow of the Vampire a little less after the latest viewing. Greater familiarity with Dafoe's performance and his makeup makes them slightly less impressive now, and Katz's pretentious satire of moviemaking rang more false for both of us. It's still a singular high concept that's worth a look from vampire fans, though since it's more a movie-movie than a vampire movie, it may not satisfy everyone. I've seen it as a variation on King Kong, with Merighe's Murnau in the Carl Denham role, while Wendigo would include it in a broader category of movie-movies that would include Cloverfield and Diary of the Dead. These have in common a character's obsession with moviemaking taken to impractical and unrealistic extremes. Wendigo has a hard time imagining that people pursued by monsters or witnessing atrocities would keep a camera rolling no matter what. He sees the point that the directors of the actual films want to make, but he doesn't really believe it. And he wants me to say that Malkovich's Murnau is more a Jack Black Denham than a Robert Armstrong.

To repeat, Shadow of the Vampire may not please every vampire or movie-movie fan. Perhaps the sequel of my imagination would work better. I'd like to see Werner Herzog make a film in which he claims, first, that Klaus Kinski was really a vampire and, second, that he's never seen or heard of Shadow of the Vampire. Better still: all of this, but with an actor playing Werner Herzog, down to the accent, while Herzog's still alive. I don't know whether Herzog would kill me out of rage or envy....
Posted by Samuel Wilson at 9:54 PM

Tough crowd. :) I really liked the (stepping back from the bigger concept) vampire starring in a movie idea, and how they approached it - after presenting a reality wherein vampires exist, seems that gives the filmmakers license to do whatever re Murnau and his film. Taking it at face value, can't think of a better vampire film made in the last decade, especially in the presentation of the vampire itself, Dafoe makes a singularly effective blood-drinker!