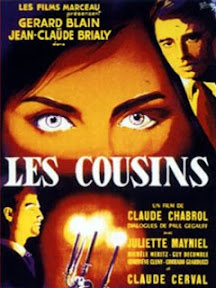 Claude Chabrol's second feature film is almost a bizarro-world version of his first, Le Beau Serge. In the earlier picture, Jean-Claude Brialy played a sheltered college boy who returns to his small home town to find his childhood buddy, played by Gerard Blain, a drunken loser. In Les Cousins Blain plays the idealistic small-town relation -- the "country mouse," as the trailer puts it -- hoping to make good in the big city but led astray by Brialy's decadent student. Cousins could almost be Serge's sour-grapes fantasy of what might have befallen him had he followed up on his academic ambitions. As it is, the role reversal is a self-conscious showcase for Chabrol's two stars, though Blain's persona in both films has something of the loser about him. Still, his is a more sympathetic turn, while Brialy gets to chew the scenery playing what Americans in 1959 would probably have recognized as a beatnik, whether the French recognized that category or not. They would have seen Brialy's Paul as a pretentious slacker, a pseudo-intellectual exhibitionist more interested in partying and making a spectacle of himself than studying for his exams. He's the guy who puts the lights down at a party, puts Wagner on the record player, grabs a candelabra, dons a Nazi officer's cap, and parades around intoning pathetic nothings in German. He's also the sort who resents it when he ceases to be the center of anyone's attention, especially when erstwhile girlfriend Florence ("revelation of the year" Juliette Mayniel) falls for cousin Charles the bookworm. 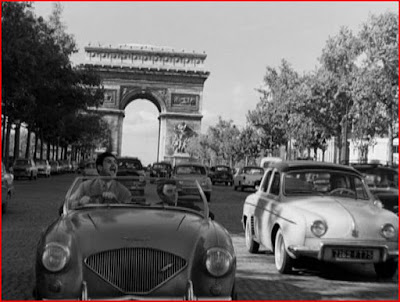 Cousin Paul (Jean-Claude Brialy) doesn't keep a low profile on the road or at home. 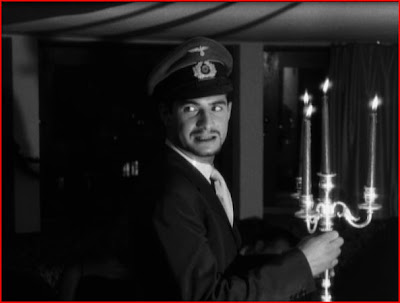 Les Cousins picks up steam as Paul asserts his dominance and Charles approaches a breaking point. The situation grows intolerable for the studious "Carolus" as Paul keeps on partying while flaunting his intimacy with Florence. The agony of intimacy, however you define the term, becomes the main subject of the second half of the film, as Charles struggles to study while Paul and Flo play in the shower in the next room, and keeps on cramming the night before the exam while Paul celebrates his miraculous success on his own exam with the biggest blowout of all, complete with a singing strongman and the "Ride of the Valkyries" bombarding the apartment with portentous sound. Anyone who's shared living space with people without fully sharing their interests or friends will feel excruciating empathy with these scenes, and the Wagner music invites us to wait patiently for Charles to snap. He's as trapped as anyone in a psychological thriller, if only for economic reasons, and yet there's something masochistic to his endurance, while it lasts. 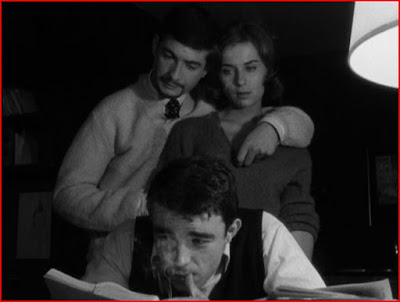 When Charles fails his exam, you feel certain that the countdown has begun as he wanders through the city and trashes his academic documents. You may have wanted him to stand up to Paul or kick his ass before, but now a sense of dread builds as you anticipate a reprisal well beyond ass-kicking -- and it's here that Chabrol really starts earning the reputation for suspense that earned him the "French Hitchcock" tag. The ending, however, reminded me less of Hitchcock than of William Wellman since Les Cousins closes, like Wellman's The Public Enemy, with a record  -- Wagner, of course, -- spinning to its end. But while the needle gets stuck at the center in Wellman's film, and somehow seems aptly representative of death, the automated needle arm of Paul's modern stereo simply lifts up and retreats to its rest, aptly representative of mechanical fate. There's a sense of fatedness to the story because it's really a fable of the City and the Village, just as much if not more so than Le Beau Serge. That may be strange to say of two films that heralded the French New Wave of auteurial sophistication, but that's how I see them. In any event, Les Cousins is a clear improvement on an already strong start, and the two films effectively established Chabrol as a director to watch for the next fifty years. I've only seen a handful of his later films, and now I'm looking forward to the rest.
Posted by Samuel Wilson at 6:55 PM