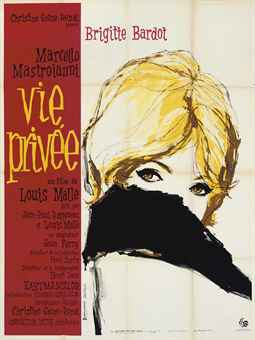 A week or so ago, as I was watching the Pre-Code Parade pass by, I caught a glimpse of Victor Fleming's Bombshell (1933), the ultimate Jean Harlow vehicle for many people because the story of a movie star hounded by hangers-on is thought to be partly a send-up of Harlow's own career. The film invites you to equate actress with fictional character by having Harlow's character star in Harlow's own earlier film Red Dust. Harlow gives every impression of being a good sport about it all, and why not? It's just a comedy, and often a fairly amusing one. I bring this up because Louis Malle's Vie Privee is conceptually very similar to Bombshell yet just about diametrically opposed in mood, unless I'm not getting the joke. Thirty years later the star imitating herself is the proverbial "sex kitten," Brigitte Bardot, and the identification extends to badly editing some poster art from Bardot movies to turn them into vehicles for "Jill," the character she plays here. In at least one scene, the disguise slips and Malle shows us a theater marquee blatantly advertising "Brigitte Bardot." Yet just as Harlow in Bombshell was reportedly playing an amalgam of herself, Clara Bow and other sex-symbols of her time, so Bardot in Vie Privee is playing a fairly specific amalgam of herself and Marilyn Monroe, the latter emerging when Jill falls for Marcello Mastroianni's Fabio, the "avant-garde lover," a magazine editor/translator/theater director standing in for Arthur Miller. The implicit commentary on Monroe veers eerily into prophecy as Jill spirals toward self-destruction in a film released in the U.S. in the summer of the real Monroe's demise but obviously filmed months before. The American title promises a frothy, salacious comedy (the original, "Private Life," is more austerely satiric) but delivers something else -- and takes a damned long time doing that.
Malle's film only gets going about halfway through, when Jill hooks up with Fabio, who'd been introduced much earlier in the picture. The first half, in the dubbed American version at least, is burdened with a dull, dry narration whose irrelevance is proven when it fades away past the midpoint. For the first hour, approximately, Vie Privee follows Jill's path from indifferent dancing to magazine modeling to sudden movie stardom with an utter lack of enthusiasm or wonder on the part of director and star. Everyone involved seems to take for granted that all they need to do is show Bardot to be halfway home. As a result, the film is front-loaded with padding to set up the actual story Malle and his writers wanted to tell: a kind of reversal of the making of The Misfits in which Jill's presence in Spoleto disrupts Fabio's spectacular outdoor staging of his new translation of a classic Kleist play. Fabio is jealous of every man's attention to Jill but also resentful of her upstaging of his planned triumph. Jill is torn by conflicting impulses, craving Fabio's attention, resenting the paparazzi but also resenting the boredom of isolation while hiding from them. All of this plays out in an almost operatically overwrought manner, established with a long tracking shot through the city's narrow streets as choral music plays and a chorus is revealed singing it -- the effect is regrettably reminiscent (or premonitory) of Count Basie's band serenading Cleavon Little in the desert. It culminates with Jill stalking the rooftops to watch Fabio's play from a godlike vantage. The predictable happens with Verdi's Requiem for a soundtrack, and in slow motion with an abstract backdrop and a sense that the supreme self-dramatizing moment has come for a character who hadn't really been shown with such tendencies before. 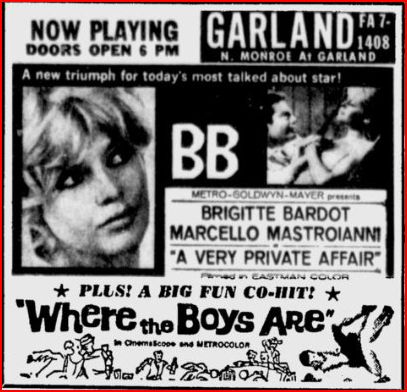 There are hints of satire in Vie Privee, but compared to Bombshell it seems entirely humorless. Even if Malle intended it as a satire, the finished product takes itself oppressively seriously. It's an invitation to pity the poor movie star that the Harlow film wouldn't dare. Harlow may have been playing a version of herself, but she was also playing her fans' fantasy of sudden stardom and liberation from Depression poverty. Who would want to be Jill? -- or on this evidence, who'd want to be Brigitte Bardot? If anything, besides being a grim prophecy of Marilyn Monroe's doom, the film is also a prophecy of the miserable, hateful person Bardot has apparently become in real life. It's such a personal film, even though she does no more than perform in it, that the mighty Mastroianni is little more than a flustered bystander.  But the Spoleto section of the film is riveting enough, and not necessarily in train-wreck fashion to nearly redeem the picture. Ideally it would have stood on its own, albeit as part of an anthology film like the Malle-Bardot segment of Spirits of the Dead.  That short and the 1965 comedy-adventure Viva Maria! at least prove that Malle and Bardot could actually entertain people together, as long as they made movies instead of movie-movies. Bardot herself could make a decent movie-movie, but while she's the star of Jean-Luc Godard's Contempt, she doesn't play a star. That might make all the difference.
Posted by Samuel Wilson at 9:51 PM

Most interesting comparison here with BOMBSHELL (a film that just arrived here in the Jean Harlow collection)which you assert is 'conceptually similar' but 'diametrically opposed in mood.' Apparently Bardot's role and performance here is the counterpoint of Marlow. Interesting too that even with traces of satire, compared to BOMBSHELL it's humorless.

Sam, it may sound paradoxical but it's just possible that Malle meant us to find the humorlessness of Bardot and Mastroianni's characters to be laughable -- and that humorlessness about their own situations is really what distinguishes Vie Privee from the more hard-boiled Bombshell to the French film's disadvantage.

I note that the newspaper ad image included in the article is from the Garland Theater in Spokane, WA...about a mile from where I grew up and still in operation today.

Dave, that's great news. What kind of shape is the Garland in these days? I'm from nowhere near Spokane but the city is well represented in the Google News Archive where I found the ad.

The Garland Theater is still in fine shape. It's been a second run movie house for quite a few years now. It's located in a sort of 'historic district' in Spokane, so it's been well maintained over the years. Here's a link to an article about the theater's history from the current website...

Yes, the google news archive is a godsend for a Spokanite like myself. I've spent countless hours using it to research movies and music concerts I attended back in the 70s and 80s.