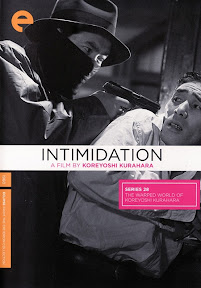 In a spin-off of its Nikkatsu Noir collection of a couple of years ago, Criterion Eclipse has released a five-film collection dedicated to studio director Koreyoshi Kurahara, who helmed the genre-defining I Am Waiting from the earlier set. The Warped World of Koreyoshi Kurahra is more generically diverse, but it picks up where the first collection left off with a Kurahara noir from 1960. Intimidation is 65 minutes of meanness, the story of a struggle of two desperate weaklings in a heartless business world. Takita (Nobuo Kaneko) is being promoted to general manager of his bank, while Nakaike (Akira Nishimura) warms the sake bottles in an antechamber. Nakaike is an all-around loser, passed over by management in favor of Takita, who also stole away Nakaike's girlfriend years ago. But it's not all unconditional victory for the new general manager. He's being blackmailed by a shady businessman who knows about some illegal loans Takita made and wants money the easy way: by Takita robbing his own bank.

The prospect terrifies Takita, who envisions getting caught in a nightmare that proves useful as a warning to make sure the alarms are cut. Takita's best idea comes while awake: to get Nakaike drunk during a night shift so he won't be around when Takita breaks in. The only problem is that Nakaike still manages to blunder into the middle of the robbery. Takita's wearing a mask, but he's already lost half his disguise when he dropped his sunglasses before breaking in. Kurahara milks the robbery scene for all the tension Kaneko can convey with his eyes as Takita trembles with fear that Nakaike will recognize him. For his part, the equally terrified Nakaike can't help wondering why this brazen robber is only stealing three million yen out of all the millions in the safe. Finally, Takita breaks first, unmasking and telling Nakaike that he was only conducting a test of the bank's security system.

﻿
Nakaike contemplates crime even more uneasily, but a gun on your back will do that to you.﻿

Without his loot, Takita confronts his blackmailer and manages to kill him. He tells the entire bank staff the security-test story, but makes a big mistake by publicly criticizing Nakaike for his poor performance during the "test." For the meek clerk, this is the last straw at last, especially considering the he wasn't really fooled by Takita's spiel. In fact, he knows more about Takita's troubles than the latter realizes, and in his rage sees an opportunity to step in and keep the blackmail screws on his old rival. This is Nakaike's big chance to turn the tables, to exploit his exploiter, but he just might stake too much on his new power over Takita....

If anything, Intimidation is more noirish in the American sense than anything in the original Nikkatsu Noir collection. There's no real femme fatale -- the nearest thing to that is Nakaike's geisha sister who eggs him on to stand up to Takita -- but the tension between two deeply flawed characters driven by conflicting compulsions could just as easily have been done with an American script and cast. The new collection touts Kurahara as a fierce stylist, but Intimidation has the virtues of concise efficiency. One of the few moments of stylistic outbreak comes during Takita's dream-rehearsal of the robbery. Here, perhaps hoping to recreate dream-logic or dream-narrative, Kurahara jump-cuts all over the place to accelerate the action, and does so at oddly timed moments to keep us slightly disoriented and maintain a sense that something's wrong. Ultimately, however, this is an actor's picture, and Kaneko and Nishimura fill the bill quite nicely. As a relatively workmanlike film, Intimidation should prove a good jumping-off point for the collection's exploration of Kurahara's more eccentric work through the 1960s. I picked up the collection during Barnes & Noble's semi-annual Criterion half-price sale, so stay tuned for more Kurahara in the weeks to come.
Posted by Samuel Wilson at 10:35 PM

"There's no real femme fatale -- the nearest thing to that is Nakaike's geisha sister who eggs him on to stand up to Takita -- but the tension between two deeply flawed characters driven by conflicting compulsions could just as easily have been done with an American script and cast."

OK, telling. While I appreciate the thorough framing here of this key film in the set, I am sorry to say I haven't watched it yet. I had already acquired the set before the sale, but I did make good on a number of other purchases this past week. Hop eyou see fit to covering the remainder of the set.

Just watched this movie after discovering Toshio Masuda's works. Its a neat 65 minute thriller. The end although loose ends are tied, the characters are so exposed. Especially Nakaikse.

One thing, how did the cops corner in Takita? Who gave him away? Looking at Nakaikse's expressions, he too seemed very disappointed that his only chance vanished. Who was it?