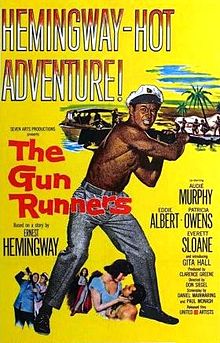 Earlier today I finished To Have and Have Not, Ernest Hemingway's 1937 novel that formed the pretext of Howard Hawks's arguably more famous and definitely better liked 1944 movie. According to legend, Hawks had tried to cajole Hemingway into writing an original screen story but the author demurred, claiming his work didn't adapt well into movies. To prove him wrong, Hawks claimed that he could make Hemingway's worst book into a successful film and chose the novel in question. I wonder about that story, since Hemingway strikes me as a man never prepared to concede that he had a worst novel. He was defensive toward and hateful of critics, though he might have been more indulgent of Hawks, who shared his "grace under pressure" attitude. Anyway, as is well known, the movie Hawks made has little to do with Hemingway's novel. It uses an episode from the book, actually taken from the short story that introduced the Harry Morgan character, in which Harry tries to teach a tourist to fish, as the springboard for a patriotic WW2 adventure. Having now read the book, I think Hawks was too hard on it. It has a bad rep in part because of its violence and the assumption that Hemingway was writing about pulpy matters that should have been beneath his notice. But To Have and Have Not proved more ambitious than that. It may be the least narcissistic of Hemingway's novels, and the most expansive in its view of society, poor and rich juxtaposed in the Depression-era tourist trap of Key West. His Harry Morgan is a man steadily broken down by risky ventures, who loses an arm in the novel's second episode and if mortally wounded in the final section. His delirium is juxtaposed with the reveries of a suicidal wastrel, a restless businessman in decline resisting worry ("only suckers worry") and a teenage girl masturbating, and the whole final section is framed with scenes that contrast ordinary people's mutual incomprehension with their commonality at the brink of sleep or death. It wouldn't be the easiest thing to film but it's unfair to think that the Hawks film, whatever its own virtues, stands in for it in pop culture history. 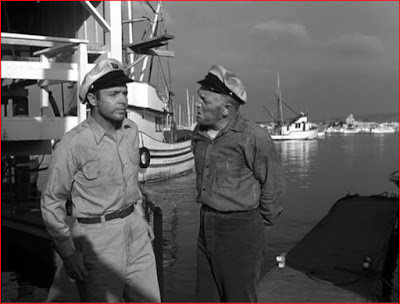 It never occurs to Everett Sloane (right) to ask whether Audie Murphy (left) was ever bitten by a dead bee, but it never occurred to anyone in Hemingway's novel, either.

As it happens, Hawks's film was only the first of three American movies based on the novel or the Harry Morgan character. Warner Bros. did a more faithful adaptation, but called it The Breaking Point, just six years after the Bogart-Bacall classic. Eight years later, Seven Arts Productions put director Don Siegel to work on The Gun Runners, which is derived mainly from the original Morgan story, "One Trip Across," while including a few other characters and bits of business from the larger novel. In this adaptation by Daniel Mainwaring and Paul Monash, we once again have the scene with the incompetent tourist as our link to Hemingway. In the story and novel, the tourist stiffs Morgan, forcing him to take on the risky job of smuggling illegal Chinese immigrants to the U.S. for quick money. In Gun Runners the tourist is arrested and the hero, now called Sam Martin (Audie Murphy) is still left empty-handed. To prevent his boat from being foreclosed on, he agrees to take a shady traveler, Hannigan (Eddie Albert) on a clandestine trip to Cuba, where he meets with revolutionaries to arrange an arms shipment. Given the time and place, these are probably meant to be Fidel Castro's men, and Hannigan deals with a bearded leader, albeit one who looks too old to be Castro in the 1950s. Hannigan's ultimate plan, however, is to trick and rob the revolutionaries, and his quick elimination of the rebel on board Sam Martin's ship puts Sam himself and his rummy sidekick Harvey (Everett Sloane) in mortal peril.... 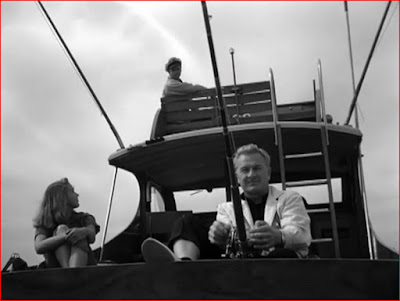 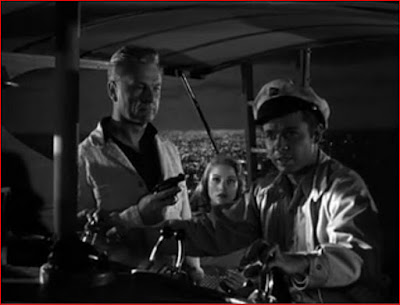 Because it's a movie, Gun Runners is going to be judged against the Hawks film, not the Hemingway novel, and it's going to be found wanting. Audie Murphy was pick-your-number-of-times the man Humphrey Bogart was in real life, at least during wartime, but he's a poor substitute for Bogart as Morgan/Martin and a poor approximation of the grizzled, cunning loser of the novel. Everett Sloane is game as the rummy (an amalgam of two such characters in the novel), but he's no Walter Brennan -- though for some viewers that might be a good thing. Hawks's movie introduced Lauren Bacall. Siegel's introduced someone named Gita Hall, who made exactly one more movie before re-emerging as a would-be reality TV star fifty years later. In cast terms, the only advantage Siegel has is Eddie Albert as the energetic, enthusiastic villain. 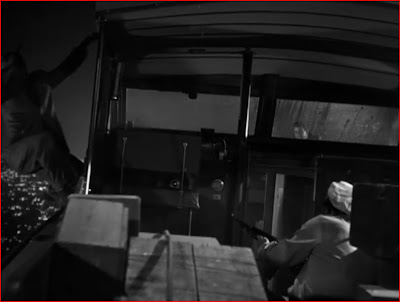 Granting all that, Gun Runners is still a mildly entertaining late-noir B-movie about a man trapped by circumstances. It suffers from some poor process work in the boat scenes, especially inexcusable since Siegel clearly filmed his actors on the open water in a real boat, only to cut back to soundstage inserts for dialogue. But the open-water shots and the location scenes on piers and beaches are nicely shot by Hal Mohr, and the climactic gunfight on the boat is nicely staged. What really hurts the film is the constant return to gratuitous woo-pitching between Murphy and Patricia Owens as his wife. These scenes are actually slightly more suggestive than was typical for the time, but they stop the story dead while seeming to signify that Audie Murphy's main appeal was with the ladies who wanted to see the famous killer as a lover. Since Siegel's film is based on a story rather than the entire novel, its happy ending is more-or-less faithful to the one Harry Morgan story in which the character comes out ahead. It lacks its source's edge of ruthlessness; in the story, Harry has to contemplate murdering his sidekick before a stroke of luck spares the rummy. But Gun Runners is still more faithful to "One Trip Across" than Hawks's To Have and Have Not is to Hemingway's. No movie yet made, however, really substitutes for reading the novel, though The Breaking Point reportedly comes closest. Reviewing this movie is really just an excuse for me to recommend the book.
Posted by Samuel Wilson at 11:45 PM