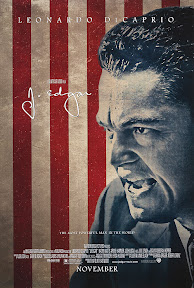 Clint Eastwood falls short of ranking among the ultimate actor-auteurs of American cinema because he doesn't write his own movies. He reads a lot of scripts, and at this stage of his career as, for all intents and purposes, the dean of active American directors, he gets to pick from the pick of them. What governs his choices? Lately, it's seemed as if he works just to keep busy. He did Invictus as a favor to Morgan Freeman, and Hereafter, I assume, just to be different. If he follows through on a plan to remake A Star Is Born I'll assume a similar reason. My first impression upon hearing about the J. Edgar Hoover biopic was along the same lines: working for the sake of working, something different for its own sake. Now that I've seen it, J. Edgar strikes me as a more personal project than the last couple or the possible next one. Let's recall, for instance, that Eastwood's mother lived to be 97 years old, dying when Clint himself was 76, and after being his date for the Oscars and seeing him win for Million Dollar Baby. That fact has to stand by itself, but given the prominence of mother issues in Dustin Lance Black's script you have to wonder what Eastwood was thinking when he read it. We can guess more confidently that he was intrigued by the flashback format. The new film shares a retrospective structure with Eastwood's Bridges of Madison County and his Iwo Jima movies, and four films should be enough to establish a directorial motif. He's clearly interested in a process of discovering the past -- and this is another film, after Changeling, grounded in the era when his mother came of age and he came into the world -- but J. Edgar introduces a twist by having its protagonist attempt to shape the past for posterity while reminiscing, while its closing scene of shredded documents contrasts starkly with the moments in Bridges and Letters From Iwo Jima when troves of revelatory documents are discovered. After experimenting with fractured flashbacks and a denial of closure in Flags of Our Fathers, Eastwood now flaunts an unreliable narrator and forces us to question whether the past we see at any point is Hoover's history or objective reality. Unintentionally complicating things further is a muddled chronology that might, on a generous reading, reflect the elderly Hoover's muddled memory, but might, on a less generous reading, reflect Black and Eastwood's muddled grasp of actual history.

The weakest part of the film, for me, was its detailed coverage of the Lindbergh baby kidnapping and Hoover's dogged, costly commitment to catching the culprit. Writer and director simply make too much of this subplot, including scenes involving Lindbergh, his go-between, and the kidnapper that Hoover isn't involved in and could not be recounting in his dictation, while stretching the investigation until Bruno Hauptmann's 1934 arrest takes place after the 1935 premiere of the movie G-Men and the 1936 arrest of Alvin Karpis that Hoover stage-managed in order to personally take the public enemy into custody. There's no good reason for this typical Hollywood sloppiness, but I suspect that the creators wanted to keep the Lindbergh thread going because it was their best case for the "good" side of Hoover, his mostly disinterested dedication to bringing a criminal to justice -- though they complicate even that by having one of Hoover's secretaries question whether Hauptmann acted alone and, by implication, whether justice had been served fully. Eastwood claims that his film is designed as a balanced portrait of Hoover, emphasizing the subject's positive contributions to crime-fighting while pulling few punches on the negative side of the ledger that interests most modern viewers. But the foreground presentation of Hoover as an unreliable narrator of his own life tends to tip the balance, and I doubt any skeptic will leave the cinema more convinced of Hoover's good points. Rather than a warts-and-all presentation of a controversial figure, J. Edgar is a sympathetic portrait of a tragic monster, and at this point it might be more useful for a while to think of it as Black's film rather than Eastwood's.

The film's J. Edgar Hoover (Leonardo DiCaprio) is a repressed mama's-boy homosexual who exploits other people's sexual vulnerabilities -- from John F. Kennedy and Marin Luther King's adulteries to Eleanor Roosevelt's alleged lesbian liaisons -- to gain leverage over politicians and retain power for himself. The "present" narrative begins with Hoover pressuring the Kennedy administration to authorize wiretapping of Dr. King by presenting evidence of presidential impropriety, and his sense of mission in the present, as well as his constant desire for vindication, colors his memoir as he dictates it over a decade to numerous assistants. Hoover stands at the apex of an unconsummated triangle, served by the loyal yet seemingly sexless Helen Gandy (Naomi Watts) and the more emotionally needy Clyde Tolson (Armie Hammer). Hoover is ever haunted by the example of an early acquaintance hounded to suicide for being a "daffodil," and by his mother's (Judi Dench) affirmation that she'd rather have a dead son than a daffodil. While he proposes marriage to Gandy, who can hardly take him seriously as a lover, his attraction to the hunky Tolson is more obvious, though he refuses to act on it as much as Clyde would like, especially after Clyde comes on way too strong in an overstated fight scene. These three profoundly repressed people represent the continuity of the FBI over fifty years, but the extent to which policy follows from repression remains unclear. Why, above all, is Hoover obsessed with the Communist menace? The film reminds us that Hoover began his rise during a period of actual leftist terrorism -- it opens with the bombing of Attorney General A. Mitchell Palmer's home -- but the initial Red Scare doesn't seem sufficient to justify Hoover's recurring impulse to persecute leftists. One hopes that Black and Eastwood don't mean to suggest that Hoover's anti-communism follows from his repressed sexuality. While the American left was long identified with scandalous notions of "free love," it'd be a stretch to insinuate that every opponent of socialism had something personal or hypocritical to hide. The filmmakers may prefer to argue that, as Hoover apparently needed to play the guardian, to be the instrument of surveillance rather than its object, he needed something to guard against, but the script is never really as political as it could be or needs to be at some points.  J. Edgar is unsatisfactory as history because it never acknowledges any influences on Hoover outside his private life, though it works better as a character study -- thanks largely to DiCaprio's strong performance -- within Black and Eastwood's constrained sense of Hoover's character. That constrained yet charitable analysis is part of what makes the movie as much Eastwood's as Black's.

J. Edgar Hoover could probably stand a multitude of biopics, and already has. He can be viewed from many angles, and some critics seem dissatisfied with J. Edgar's choice of angle. For some, Hoover is an arch-villain of the 20th century, and some of them won't be satisfied unless Hoover is portrayed as a monster -- in a dress, of course. Eastwood's film will only partially satisfy them, while others will say that the director has given the Director a bum rap. Movie people have noted the irony of this critical portrait coming from the man who started playing Dirty Harry while Hoover still lived, and in a way J. Edgar may be the late-career reflection on, if not repudiation of Harry that Gran Torino was thought to be. Or you could see Hoover as Little Bill from Unforgiven grown large, justifying his abuses of power because he was building a sort of house. Eastwood himself is probably satisfied with having presented a conflicted human being who can inspire condemnation and compassion at the same time. At the end, there's an awful pathos to our last vision of Hoover, half-naked, pot-bellied and ultimately vulnerable, and to another character's reaction to the sight. Is J. Edgar Hoover deserving of pathos? Eastwood told us nearly twenty years ago that "deserve's got nothing to do with it," and he says it again here. After two relatively impersonal projects, he's an auteur once more, with a film not lacking in Wellesian ambition. In some ways J. Edgar is Citizen Kane turned on its head, with its Kane dictating his life story instead of others telling it, and in some ways, down to its exploration of a room of artifacts and the revelation of an unlikely Rosebud, it's just plain Kane. I wouldn't call it "Eastwood's Citizen Kane" because Eastwood's made plenty of superior films, but the ambition ought to be recognized. He may not be a complete auteur, but he comes pretty close.
Posted by Samuel Wilson at 7:40 PM