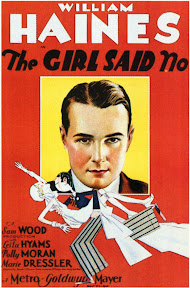 Are you one of those moviegoers who can't stand comedians who are overgrown boys, whether infantile or adolescent, whose comedy consists almost entirely of acting out and being obnoxious for the sake of being obnoxious? Are you thinking of certain names even as you read this? If so, then eighty years ago you would have hated William Haines. One of M-G-M's top stars in the late silent era, Haines (perhaps best known now for being as nearly open a gay man as the era allowed) made the transition to sound easily enough, but gradually lost his popularity and was out of the acting business by the mid-1930s. On the strength of Sam Wood's film, which I saw yesterday as part of TCM's tribute to co-star Marie Dressler, I can see why. The one-word description of the Haines persona, for euphemism's sake, would probably be "brash." He's a hyper-aggressive irreverent go-getter, though he can be distracted easily enough from successful go-getting a la Harold Lloyd to go-getting after girls, with The Girl Said No being an extreme case of the latter. Like Lloyd, his persona grew more dated, and maybe more intolerable, as the stock market plunged. In manner Haines actually isn't much different from the "nut" comics and double-talkers who were storming Hollywood from Broadway, but what seems audacious or transgressive from a Marx brother merely seems arrogant or asinine from Haines. As outsiders in some sense or other, the hard-boiled fast-talkers of Depression cinema impress with their show of what audiences recognized as survival skills. Haines, in this picture at least, starts off privileged as a businessman's son who no doubt had his way paid through college by Dad. As a result he comes off like a predatory asshole instead of a hustling scrapper, and who wants to see him win? -- yet win he does.

In The Girl Said No, Tom Ward (Haines) is back from college and about to embark on a career as a bond salesman -- a vocation as sure to win the hearts of 1930 audiences as it would today. But he's more interested in chasing girls, in particular Mary Howe (Leila Hyams), the girlfriend of smug college grind J. Marvin McAndrews (Francis X Bushman jr.). Tom's strategy to drive a wedge between the couple is to have a waiter dump soup on McAndrews while he accosts Mary for a perilous joyride. "I'm telling you I'd die for you right now," Tom says, "You don't believe me? Let's go right off the road!" Mary's escape is short-lived as Tom resumes his harassment at their workplace. Told by Mary, a secretary, to wait on the bench outside her boss's office, Tom picks up the bench and brings it inside, protesting that "it's hard as your heart!" At work, he keeps trying to hit on Mary over the phone. A co-worker rightly pegs him as a "sniveling jackass." After an embarrassing scene at her apartment, at the end of which he KOs McAndrews and exits in his underwear, he reconvenes with his college cronies for another wild party, then comes home to learn that his father is dead.

We leap ahead several months, presumably, and an apparently chastened Tom is working as a necktie salesman in a department store. The entire family (mother, Tom and three siblings, and an implausibly loyal maid [Polly Moran]) apparently depended on dad's income for everything. With that gone, they now live in a cramped apartment and are behind on the rent, while Polly the maid has been paying grocery bills from her own savings. Tom encounters Mary on the sidewalk during a lunch break, and the miracle is that she doesn't immediately cross the street. She still seems interested in him, concerned for his well being -- I must emphasize that Haines was a handsome guy with a lot of chick appeal, unlike the schlubs I deem his modern heirs -- and impressed by his new attitude. "I haven't anything to be cocky about anymore," he admits, but as opportunity comes knocking again with another chance at the bond firm, the demon reawakens. In this sort of aspirational comedy, the hero earns his spot not with a successful interview, but by accepting some challenging business assignment. In this case, Tom is tasked with selling an entire bond issue for a Denver park to millionairess Hettie Brown (Dressler), who happens to have an aversion to the entire city of Denver. Tom sees his opportunity when an exasperated doctor attending Brown loses his medical bag and leaves without seeing his patient, who has, of course, never seen him before. Posing as the doctor, Tom suggests the park as a therapeutic public-spirited investment that might relieve whatever embarrassing condition Brown divulges to him with a whisper. To seal the deal, he gets the old woman hammered on a bottle of medicinal alcohol from the medical bag. Dressler, a legendary comedienne on the comeback trail in a featured role, is the only performer who can stand up to Haines. Half a glass of the stuff gets her plastered enough to steal the scene from the star, though Haines has the Pre-Code Play of the Film when he probes deep into Dressler's cleavage with a pair of tongs to find a lost pen. "Are you enjoying yourself?" she asks. To regain audience sympathy and preempt the question of what Brown might do when she sobers, Tom admits his imposture ("I'm not an M.D., I'm a B.S....a bond salesman.") but the old lady forgives him instantly and concludes the sale.

Tom returns in triumph to the office to learn that Mary is getting married to McAndrews that evening. Initially deferential on the assumption that he owes his rival for the business opportunity, Tom plots revenge when he learns that McAndrews had expected him to fail. He avenges himself by calling the cops, pretending to be McAndrews, and telling them to arrest the impostor who's stolen his car. Step two is to invade the wedding site and kidnap Mary. We're not talking about a romantic flight out of The Graduate here; Tom drags her out of the place literally bound and gagged and drives off after slashing everyone else's tires. When she continues to resist he's ready to throw her out of the car, but when she realizes that she (for some reason) doesn't want Tom thrown in jail, Mary decides the only way she can save him is to marry him. He's a handsome sociopath, after all.

I suppose you could stand it if you found Haines funny, and there's some small freakshow value to all his mugging, posing, baby talk, etc., but Tom Ward is no less sympathetic or endearing as a resurgent striver than he was as a manic wastrel. You'd really have to think that William Haines the movie star is simply the greatest thing on earth to actually root for him in this picture. I don't consider myself particularly politically correct in every regard, but if I found his behavior barbaric, imagine how more sensitive audiences might respond to his rampage. As a film buff I knew about Haines and his stardom, but I'd never seen any of his star vehicles before this one, and this one left me wondering whether he came on less strong and more palatable in silent film. I'd recommend The Girl Said No to anyone curious about the types of personalities who were stars in the distant past, but I'd like to think there are better Haines pictures out there. On the other hand, he's such a completely appalling character in this one that it might prove the most entertaining of all his talkies if it finds him at his least restrained. It comes off like a failed experiment before the actual breakthrough that cinched things for all the fast-talking wiseacres to come, and that air of experimentation, if not desperation in some cases, is what makes the early talkie period up to 1930 a fascinating subset of the overall Pre-Code era.

Posted by Samuel Wilson at 4:25 PM

"I'd recommend The Girl Said No to anyone curious about the types of personalities who were stars in the distant past, but I'd like to think there are better Haines pictures out there."

Interesting Samuel. As you know I recently had a banner time with pre-coders at a festival, but aas you have proven here the period is so rich and prolific, that even a 50 film retro is only scratching the surface. The fact that I know little about Haines is a sterling example. TCM is really expxpanding their boundaries as of late. Anyway I am cognizant of the issues in this as well, and you have again written beautifully and comprehensively.

Sam, I had a head start on Haines because I read about old movies long before I started watching them, but history still doesn't prepare you for the brazen actuality of the man. And yes, you can depend on TCM for healthy doses of pre-Code on a regular basis when they aren't doing the Days of Oscar or Summer Under the Stars. That channel's the main reason why I own a DVR now.