THE ROPE AND THE COLT (Cimiterio senza croci, 1969) 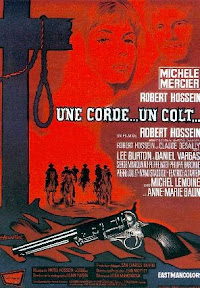 Actor-director Robert Hossein dedicated his western to Sergio Leone, but his film is no homage to the master. Instead, he honors Leone by making an original and uniquely bleak and deliberate variation on spaghetti-western motifs. It's a revenge story like many other spaghettis, but Hossein's tragic spin on the situation, the result of his disputed collaboration with Dario Argento and another writer, sets his film apart from the rest of the genre.

Hossein plays Manuel, a gunfighter living in apparent retirement and seclusion in an almost expressionist ghost town. We meet him after we've seen a man hounded and hanged in front of his own wife by the local bullyboys, the Rogers clan. The widow, Maria (Michele Mercier) makes a pilgrimage to the ghost town to implore Manuel, with whom she clearly had a past, to kill the Rogers men. He tries to beg off, claiming to have renounced violence and warning that revenge will do Maria no good, but she tosses a bag of gold at his feet as payment in advance. Inside his abandoned gambling den, he mulls over her request as he plays with the roulette wheel. Finally, he pulls on the leather glove that means he means business, stashes the money away in a cabinet where we see a photo of himself, Maria and the late Mr. Caine, and sets out on his mission. 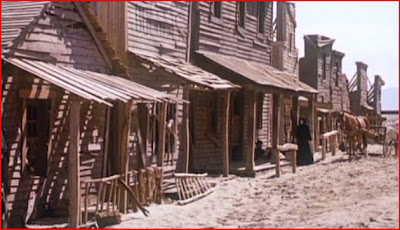 Summoned from his ghost-town refuge (above), Manuel dons his shooting glove when trouble impends(below). 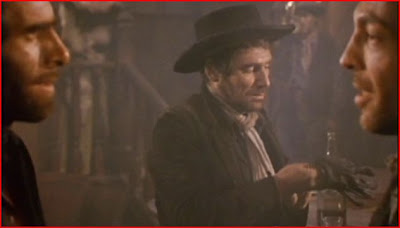 In town, Manuel waits for a chance to ingratiate himself with the Rogers clan, and gets it when another clan, the Valleys, threaten one of the Rogers men over cards. Manuel parlays his disinterested intervention into a job as a Rogers ranch foreman, which gives him an opportunity to bust open a corral and scare the clan's horses into the night. When the rest of the hands give chase, Manuel steals into the patriarch's house to kidnap the old man's daughter Diana (Anne-Marie Balin). He takes the girl to the ghost town, where he meets with Maria, who intends to collect a huge ransom. She intends more than that for Diana, it seems, when she lets two of her own goons into the old gambling den. As she and Manuel wait outside, Hossein stages something like the moral equivalent of a gunfight. He cuts back and forth between himself and Mercier, moving the camera closer each time as the gunfighter realizes that Maria's men are raping Diana. The scene plays out without dialogue, but Hossein's expression conveys his horror and disappointment, while Mercier seems to crumble from within while maintaining an implacable facade. 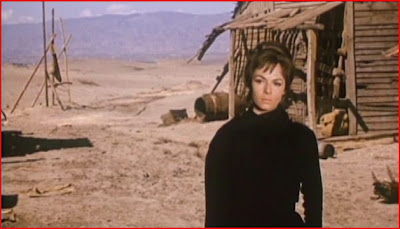 The avenger: Michele Mercier as Maria Caine.
The incident exhausts Maria's hunger for revenge, and she declares herself ready to leave the region with Manuel once they collect the ransom. But they learn too soon that they no longer control their destinies. The cycle of revenge takes on a life of its own as the Rogers clan strikes back at Maria and Manuel heads for a showdown with the Rogers men in the ghost town, only to face a surprise final antagonist.... 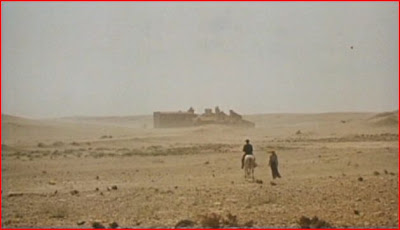 Rope and Colt is an unusually pensive spaghetti western, a departure from the cartoonish tendency of the genre in its emphasis on guilty consciences and regret for roads not taken. It's as much a doomed romance as a revenge drama, a rare spaghetti in which a male-female relationship overshadows the feuds among men. Hossein and Mercier had been a romantic team in a series of films earlier in the Sixties, a fact that must have lent their tragedy here extra resonance for European audiences. Without knowing their on-screen history, I could appreciate their chemistry despite the dubbing because Hossein tells their story with as few words and as many meaningful looks and gestures as possible. In a bit of Coppolesque nepotism, Hossein's father wrote the score, and while it has the expected Morriconian theme and awkward English lyrics at the beginning it mostly succeeds at expressing the film's bleak sentiment, sometimes with near-operatic intensity. As a director, Hossein doesn't ape Leone's dynamic action or epic framing, but he invests his film with a strong sense of space and a good eye for landscape. In many ways it comes closer to an American "psychological" western of the 1950s than to a spaghetti, but Hossein's homage to Leone was not to make a spaghetti western, but to make a good one. 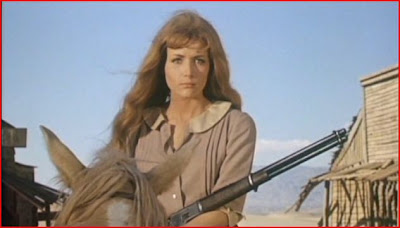 The next avenger? Anne-Marie Balin as Diana (or Johanna in the original language).

The film may be better known under the English translation of its Italian title, "Cemetery Without Crosses," but Rope and the Colt is how its presented in Timeless Media Group's The Best of the Spaghetti Westerns collection. This 20-film set is a twofold case of false advertising, being obviously not the best of the genre in the absence of Leone's films (though all are said to be "in the tradition of The Good, The Bad and The Ugly), but in one respect the false advertising is a good thing. The box proclaims a "Full Screen Presentation," but never was box copy more happily wrong, as all the films I've sampled so far are letterboxed. I was fortunate enough to stumble across this set at Barnes & Noble, coincidentally at a 50% discount at the same time as the chain's last half-off sale on Criterion discs. If Hossein's film is typical of the set, this may prove the best bargain in the store.

Here's an Italian trailer, uploaded to YouTube by SWDBTrailer.