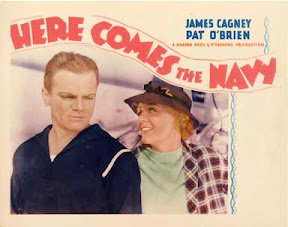 Maybe Llyod Bacon's service comedy doesn't belong in the Pre-Code Parade. At the time, this initial team-up of longtime screen partners James Cagney and Pat O'Brien was received as an example of how Cagney, in particular, would be presented in the new era of Production Code enforcement. Here's Dan Thomas writing for the United Press service in July 1934.


Passing on to another picture which comes under the new order -- in other words the type of production good for family entertainment -- one finds James Cagney's latest, "Here Comes the Navy." Despite the fact that he is an outstanding hero with kids all over the nation, most of Cagney's films have contained objectionable features. Not so this one, however....It will be films of this type in which you will see Cagney in the future. He'll be hard-boiled, sure, but there will be no more of the gangster or rough on women stuff.

Thomas was not a perfect prophet, but he tells us what the Breen Office and its advocates expected from Cagney and his studio from then on. I watched Here Comes the Navy expecting to see the first chapter in the taming of Cagney -- a service comedy seemed an ideal vehicle for that project. But what I saw was a kind of rearguard action by the five-man writing team, a largely successful attempt to keep the transgressive Cagney persona alive while appearing to socialize him.

There are two types of service comedy, at least. There are those about the utter physical incompetents and their struggles with drill and discipline (Shoulder Arms, Buck Privates, etc) and those about the idiosyncratic asshole who learns the value of discipline, honor and patriotism. Tell It To The Marines, a silent movie that earned Lon Chaney Sr. an appointment as an honorary Marine, is the template for the latter kind of service comedy, which I expected Here Comes the Navy to follow, with O'Brien as the gruff mentor who makes a real man (or a "right guy," in the film's own jargon) out of Cagney. Their later Fighting 69th comes closer to the model, but Here Comes the Navy is less a tale of a man mastered by an organization than one about a man mastering an organization.
Cagney plays "Chesty" O'Connor, a civilian contractor at a Navy yard who falls into a feud with O'Brien's naval officer, Biff Martin. O'Connor is some sort of big shot or would-be big shot with the construction workers, spending big dough for the day to give away a loving cup to the winners of a dance contest at a union frolic. He ends up getting into a brawl with O'Brien -- Cagney preserves his dominance by losing only because a girl distracts him. His idea of seeking revenge is to enlist in the Navy, expecting to be assigned immediately to Biff's ship, the doomed USS Arizona, where Bacon filmed some scenes with Navy cooperation. Instead, of course, he's assigned, along with his adoring stooge Droopy (Frank McHugh) to six weeks of basic training -- learning this, Chesty says "I quit" but can't once he's taken the oath. Fortunately for him, he gets assigned to Arizona after finishing basic, and his feud is fired up when he falls for Biff's sister Dorothy (Gloria Stuart).
Chesty's nasty attitude toward Biff extends to the Navy as a whole, and his open contempt for it all, despite friendly warnings from the more sociable Droopy, earns him isolation and the scorn of his fellow sailors, most of whom happen to like Navy life. From this point, one might interpret the remainder of the film as Chesty's attempt to earn the regard of his comrades, but the film lets you interpret things differently as well. Loading shells and powder into Arizona, he sees that some spilled gunpowder has ignited, threatening the entire ship. He throws himself on top of the smoldering powder and smothers it with his own body. He earns the Navy Cross for this, but readily tells anyone who'll listen that he acted primarily to save himself. Within moments of the medal ceremony, he pins the medal on Droopy's chest, in view of the high-ranking officers who'd decorated him, telling his new sailor buddies that he only cares about the bonus that comes with the medal. Before long, at his own request, he's transferred to the airship Macon, another doomed vessel in real life.

In a climax based on a real accident, Arizona's crew, including Biff, is assigned as Macon's ground crew. Due to rough winds, the airship can't dock on its first pass and the ground crew has to quickly let go of the ropes. Biff doesn't let go and is carried high into the air with little likelihood of hanging on long enough to land with the ship. In a happier resolution than in reality, Chesty, without knowing who he's saving and in defiance of orders, has the ingenious notion of shimmying down the rope to the victim and going down together with him and a parachute. They're both beat up by the landing, but before long Biff is using crutches to lead Dorothy to the altar, where Chesty wheels up to join them. Then comes the closing gag: for his creative heroism Chesty has been reassigned to Arizona with a promotion that makes him Biff's superior officer. The man has mastered the system, not the system the man. Cagney shows no sign of being anything different from his arrogant, hard-boiled wiseacre self we've seen all along. He is not tamed or really even disciplined, and we could easily assume that his acts of heroism are matters of pure instinct, innate to his persona, and nothing the Navy taught him. In short, Here Comes the Navy is less a generic service comedy than it is a Jimmy Cagney star vehicle, and the difference between the two, even in the transitional year of 1934, makes Bacon's film more pre-Code than not in spirit, even in the absence of "rough on women stuff." Of course, the scene in which sailors basically accuse Droopy of being gay for Chesty ("What are you, a couple of violets?") helps that impression along, as does an overall irreverence that seems surprising given the Navy's cooperation with the project. Cagney's irrepressible attitude and his interplay with both O'Brien and his fellow "Irish Mafia" member McHugh make this a genuinely funny film. It's cool to see how much Cagney can get away with in a military setting, however unrealistically, and still advance. I assume he wouldn't have gotten away with as much a year or so later, and that assumption entitles him and his film to join the Pre-Code Parade.

The trailer says that "Every sailor is a Don Juan inside." Sounds like Pre-Code to me. Here's the rest of it from tcm.com.

Posted by Samuel Wilson at 6:53 PM

Another great review, Samuel - I'd just seen Marilyn's review of the same film on Ferdy on Films, so I'm guessing it might have shown up recently on TCM in the US. I've only seen it once when it was briefly posted online, but definitely remember it as mainly a vehicle for Cagney, who comes out joyously on top, as you say - I know that the sight of the Arizona and the airship is poignant now because of the fate they both met. I'd also agree that it does have a pre-Code feel to it, with the jokes about Cagney and McHugh that you mention.

Judy, you can probably measure Code enforcement by O'Brien's greater moral dominance of his later teamings with Cagney, even though Cagney always remains the top star. And you're correct about the recent broadcast, which as I recall was part of a run of films set aboard ships. Thanks for writing.

Yep, I saw Marilyn's review as well, but was unable to offer anything substantial, not having seen the film yet. Of course Cagney's appearance in it alone makes it essential. Another excellent review at Mondo 70.