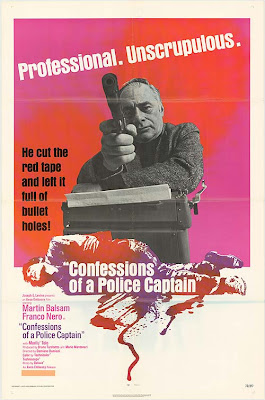 In his imperfect English, Franco Nero describes this film from the late director Damiano Damiani as the "most sold" movie in the history of Italian cinema. What he means is that Confessions of a Police Captain played in more countries around the world than any previous Italian film. This fact must gall him, since he reports that the producers never paid him for his work. That may explain why he didn't do his own dubbing for the English-language edition. The effect is mixed, since Nero is one of the few Italian actors whose own voice was readily recognized by American audiences. But doing without Nero's voice preempts any confusion over why his character alone has an accent while his co-star Martin Balsam, doing his own dubbing, clearly doesn't. Nero encouraged Damiani to cast Balsam after both star and producer had rejected Anthony Quinn and Ben Gazzara -- the latter had already committed to the film -- because both actors insisted on changes in the story and its location. Nero had seen Balsam in Catch-22 and other films and thought he looked Sicilian. It was a good break for Balsam, who could depend on work in Europe for years afterward, and he's a surprisingly authoritative figure in the title role. The picture itself is a potent urban tragedy, a portrayal of a government so rotten with corruption that two essentially honest (or at least good) men are unable to trust one another in the fight against crime.

Balsam is Captain (more correctly, Commisario) Bonavia, first seen paying a visit to a lockup for the criminally insane, where he orders the release of an atypically fastidious prisoner. Only days later, the ex-prisoner shoots up an office building, dying soon afterward of wounds inflicted by the guards. Bonavia seems to have expected this to happen, but he's surprised to learn that one person in particular wasn't killed and wasn't even there. He has to assume that the apparent target, one D'Amrbosio, was tipped off to the impending attack. Meanwhile, newly arrived assistant prosecutor Traini (Nero) finds the situation fishy as he learns more about the circumstances of the con's release. He can guess that Bonavia is up to something, but the reason remains a mystery. Meanwhile, Bonavia regards anyone else on the case as an impediment or a threat.

Bonavia and Traini circle one anoter warily and with increasing hostility as Traini sets up a meeting with the otherwise-elusive D'Ambrosio to learn why the ex-con or someone higher up would want to kill him. Finally Bonavia has to put his cards on the table, explaining to Traini his grudge against D'Ambrosio. It has to do with his failure to convict D'Ambrosio for the murder of a union agitator ten years ago, mainly because an eyewitness to the killing, a shepherd boy, had "accidentally" fallen off a cliff. D'Ambrosio controls the workforce on corrupt construction projects and is tight with local businessmen and politicians. That makes him virtually untouchable for Bonavia; hence his recourse to assassination, relying on a man whose family had a grudge against D'Ambrosio and whose sister (Marilu Tolo) has information on D'Amrbosio's more lethal activities. When Bonavia takes her into his personal custody, it only makes him look worse in Traini's eyes, since the prosecutor still suspects more venal motives on the Commisario's part. The gears of justice only seem to tighten the noose around Bonavia's neck, thanks in part to Traini's naivete, until the police captain feels compelled to take even more drastic steps to secure justice ...

Confessions may be the most pessimistic -- or cynical, depending on how you see it -- of Damiani's crime films, though it leaves open an actually strong possibility that Traini may finally do the right thing. It leaves you questioning what he could accomplish, however, given the systematic, self-reinforcing and demoralizing corruption in Sicily. The movie is clear kin to Italy's tough-cop movies from the same decade but is clearly more ambivalent about the apparent necessity of cops bending or breaking rules than the average Maurizio Merli or Tomas Milian vehicle. Balsam does a lot to sustain the ambivalence, avoiding the self-righteous hysteria we might expect from his role. When he blows his stack, it's in frustration with the system, while his vendetta against D'Ambrosio is a more cold-blooded affair, explained in matter-of-fact fashion. There's a growing resignation in his character, again best expressed by the actor's restraint when he realizes that Traini has unwittingly doomed another character. You remain convinced throughout of his authentic moral indignation, but it's Balsam's underplaying, his refusal to let you think his character is crazy, that keeps the Commisario a sympathetic and ultimately tragic figure. I can only judge Nero fairly by his physical presence in the English edition but Damiani again exploits a certain earnest shallowness he can make the actor project, as he did in a similar role in Day of the Owl. It's to Nero's credit that he liked working with Damiani even when the roles weren't flattering. I'd like to see The Case is Closed, the prison movie they made together between this and How to Kill a Judge, but I don't know if it's available in any English language form. I do have How to Kill a Judge at hand, so look forward to a review of that title in the near future.
Posted by Samuel Wilson at 9:14 PM