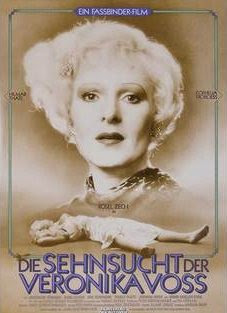 Rainer Werner Fassbinder aspired to be a cinematic Balzac for the Federal Republic of Germany -- better known in America as West Germany and known to its own citizens as the BRD (Bundesrepublik Deutschland). He had drive and he had youth, but by the time he got busy with the project it was already just about too late. With a huge output already behind him, he made three films that stand as the "BRD Trilogy" following Fassbinder's drug-related death a few months (he was only 37) after the release of Veronika Voss, chronologically the second film of the three. The BRD films portray a Germany on the make as the capitalist part of the divided nation rebuilds under American occupation after World War II. Fassbinder sees corruption in all the deal making and related betrayals attendant on the BRD's "economic miracle," and he sees this quite overtly through the lens of classic cinema, both German and American. In the most obvious case, BRD 3, the second film released, is Lola, Fassbinder's riff on Josef von Sternberg's The Blue Angel, with a new generation of degeneracy breaking the pride of a self-righteous bureaucrat. But BRD 1, The Marriage of Maria Braun, can be seen almost as plausibly as a riff on Gone With the Wind, with the title character as a West German Scarlett O'Hara ruthlessly adapting to a newly commercialized environment. In turn, while Veronika Voss is based partly on the sordid end of an actual German film actress, it's also self-consciously evocative of Sunset Blvd. -- inevitably, given the subject matter. But that's just the tip of the picture's evocative iceberg. 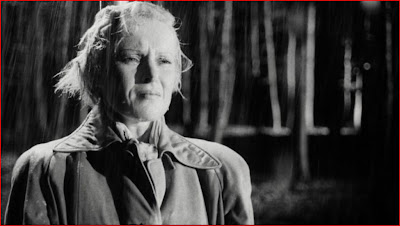 Will Veronika Voss be ready for her close-up? Watch Die Sehnsucht and find out! 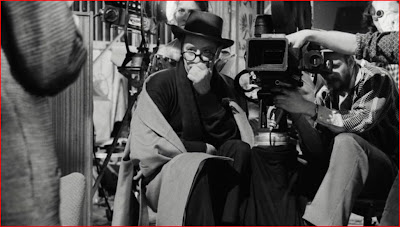 Veronika Voss (Rosel Zech) is as self-delusional as Norma Desmond, but not as much as a menace in her own right. Popular during the Hitler years, she wasn't exactly purged from the film industry, but she hasn't worked in thee years as our story opens. While most sources date events in 1955, the playing of Johnny Horton's Battle of New Orleans during the movie would be an anachronism unless the story took place in 1959 or after -- but here ends the pedantry. Voss gets caught in the rain returning from a screening of one of her films and finds a samaritan in Robert Krohn (Hilmar Thate), a sportswriter with an umbrella. He doesn't recognize her initially, while she sees him as a new lover, a mark, or both. At a subsequent lunch meeting, she borrows 300 marks to buy a brooch she simply must have, then returns the brooch to the store and pockets the money. But it's not as if she lacks for money. The problem is that she doesn't have control of it. As an increasingly obsessed Robert learns, Voss is under the control of Dr. Katz (Annemarie Dueringer), the instrument of control being morphine. Katz is a figure out of film noir -- think of malicious female doctors in films like The Uninvited, Nightmare Alley, etc, though her clinic is ironically a white-on-white wonder of production design. One of the few notes of darkness is the archetypal African-American soldier played by Guenther Kaufmann (under different character names) in all three BRD films. In Voss the soldier seems to live in Katz's clinic and goes about his business in blissful, near-total ignorance of the plot, though his presence may be meant to make a point about the American occupation in general. Cinematographer Xaver Schwarzenberger makes the most of the opportunities this set offers; his work in black-and-white here rivals his lurid color photography of Lola the previous year. The overall art direction adds a layer of expressionism to the story's noir tropes, and as the film evolves into a they-won't-believe-me thriller, with Robert desperately attempting to expose Katz's racket and putting both Voss and his girlfriend (Cornelia Froboess) in mortal peril, the layers of cinema history peel away until at the heart, arguably, you find The Cabinet of Dr. Caligari, with Katz as the evil keeper of the asylum and Voss the hapless somnambulist, a seductress rather than a killer. 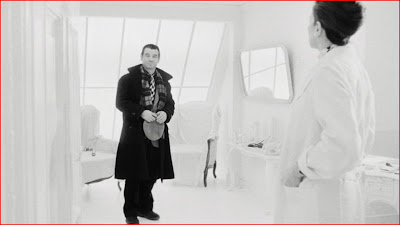 In the white room 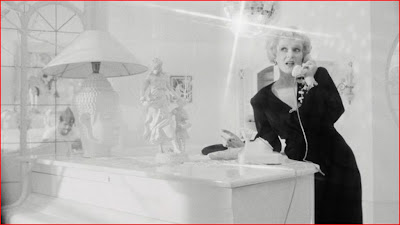 On some level, the BRD films seem like an attempted synthesis, or at least a dialectic mashup of Hollywood and Weimar tropes, but when the trilogy is done you're left wondering how Fassbinder's movie-archetype approach enhances our understanding of social and cultural trends that he apparently deplores. On a satirical level he seems to be saying that West Germany was repeating the stories cinema has already told, Lola in particular looking like a tragedy repeated as farce. But what came first? The decision to chronicle the BRD with movie archetypes or the decision that the BDR was reliving them? Fassbinder's strategy could well be dismissed as a too-easy substitute for the novelistic analysis his Balzacian ambition required. But if his intention was no more than satire, the trilogy can stand with the great cinematic satires, even if Veronika Voss draws very few chuckles. The safest approach is to acknowledge that the BRD series never took its intended or naturally evolved form and to respect the surviving building blocks as part of Fassbinder's cinematic monument.
Posted by Samuel Wilson at 9:37 PM