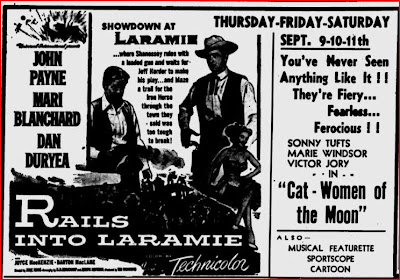 Here's an unpretentious Hollywood western from the genre's golden era. Jesse Hibbs will never be mentioned alongside the major western directors of the Fifties like Mann, Boetticher and Daves, but he was a western specialist for the most part -- his best-known work is most likely the Audie Murphy-as-himself biopic To Hell and Back -- before becoming a TV director in the Sixties. The cast interested me more than the director. John Payne has fresh credibility as a tough-guy star with the rediscovery of Phil Karlson's 99 River Street, while Dan Duryea needs no introduction as a reliable villain. At his side is Lee Van Cleef in one of his more substantial early roles. The story, for which two writers share credit while Borden Chase did some doctoring, is a fairly typical town-tamer affair given a little extra grit by Payne. He plays Jeff Harder, an underachieving Army sergeant with a habit of starting brawls in saloons -- he doesn't like cheating. After getting his ass kicked in one such brawl, he's given a choice between the guardhouse and a mission to expedite railroad construction in Laramie WY. Widespread malingering has slowed progress and local business interests are complicit in it -- they don't want the workers and their regular paychecks to leave town. Among these businessmen is Jim Shanessy (Duryea), the archetypal corrupt saloonkeeper, who happens also to be an old crony of Harder's. Their friendly reunion is short-lived, however, once Harder realizes that Shanessy is the power behind the construction slowdowns. He also happens to resent the Harder gang's attempts to bribe him, and he doesn't like Ace, Shanessy's enforcer (Van Cleef)  on general principles.

After inspecting the construction site and beating workgang leader Pike Murphy (Charles Horvath) into temporary submission, Harder realizes that only drastic steps will restore discipline and get the rails laid on schedule. Authorized by the army to take any steps necessary, he goes over the head of Graham (Barton McLane), the men's actual employer, and fires the entire construction gang, allowing them to return to work only on his terms. This move scandalizes the town fathers, since no income for the workers means no sales for them. At a public meeting they urge Harder to rescind his order. He doesn't back down, telling them, "I don't think there's an honest businessman in this town." Here's another instance in which westerns seemed to subtly challenge entrepreneurial values. It isn't the first time I've seen a Fifties western in which town fathers hinder a hero's town-taming because they like the untamed folks's money as much as anyone else's. If these films aren't challenging entrepreneurship itself, they do suggest that there are higher values than making money, and that civilization wouldn't get very far if people cared only for profit. Harder chides Shanessy at one point, noting that with his brains he could get rich honestly. "Not as rich and not as fast" is Shanessy's answer. More than many contemporary westerns, Rails hails women as a civilizing force. Taking advantage of Wyoming history -- the territory was the first to grant considerable civil equality to women, Harder tries to secure Shanessy's conviction on a murder charge -- he'd had Ace kill Harder's deputy -- by seating an all-female jury in a criminal trial for the first time in American history. Before this, the town's all-male juries had routinely acquitted Shanessy's men. It looks like the deck is still stacked against Harder when one of the jurors is Lou Carter (Mari Blanchard), Shanessy's partner in his saloon. It seems unlikely that someone with such a conflict of interests would be allowed on the jury, but she surprises everyone by voting to convict Shanessy. If anything, the film is too quick to have her emphasize that she did this for sound legal and moral reasons, and not to take over the saloon. By now she's become Harder's love interest so I guess she has to be a good girl.

Being a town western, Rails lacks the sweep of many of the decade's best westerns. Hibbs's focus is on personal confrontations, and he invests the several showdowns of Payne and Van Cleef with a decent crackle of hostile energy. The biggest spectacle in the film is its use of trains. Shanessy's men jump Harder and dump him on an outbound train so he can't testify at the trial; when Harder comes to, he orders the engineer to back the train all the way to Laramie. Later, Harder and Shanessy fight on a train on a collision course with another engine on the same track; once again the train goes backwards to get out of harm's way while the other train brakes. There's no real revelation here, though Payne readily projects a take-no-crap attitude and Van Cleef shows his promise. Duryea is relatively uninspired in a too-generic villain role, neither too crazy nor too torn over his failing friendship with the hero. Rails Into Laramie goes in a few interesting directions but never quite escapes a tolerable mediocrity. Tolerable counts for something, though, and there's enough going on in the picture that western fans won't think their time wasted.
Posted by Samuel Wilson at 8:13 PM