The shadows are lengthening as indignation over cinematic immorality spreads slowly across the country. In the news this week, Dr. Eastman of Chicago tells a Milwaukee audience that censorship won't solve the problem because it doesn't reach the root of it. Rather than edit questionable films, there should be some way to prevent them from being made. 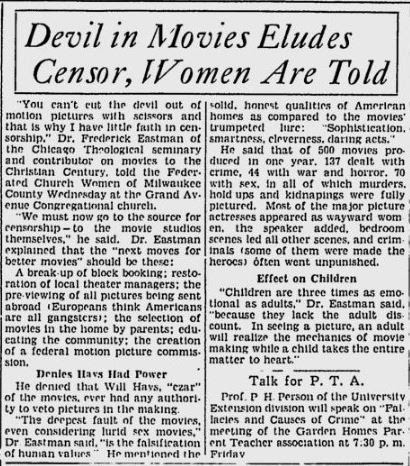 Meanwhile, on with the show! After three weeks The 7th Commandment takes its leave of the Garden theater, to be replaced with a title familiar to fans of the time, though the content seems to be different from what old-timers remember. 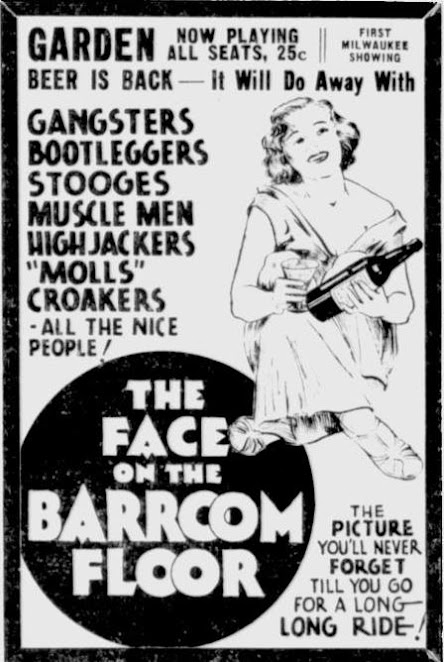 Once upon a time The Face on the Barroom Floor was a ballad telling the sad tale of an artist ruined by lost love and alcohol. Charlie Chaplin parodied the poem in a 1914 Keystone short, but the film advertised above is a perhaps-straightfaced, perhaps-campy melodrama -- the advertising definitely leans toward camp -- in which Bramwell ("He went out for a little walk!") Fletcher's life goes to hell when he gives in to peer pressure and gets drunk at a wild party. If it lives up to the ad it'll be a gem.

A couple of more familiar titles open together at the Warner. 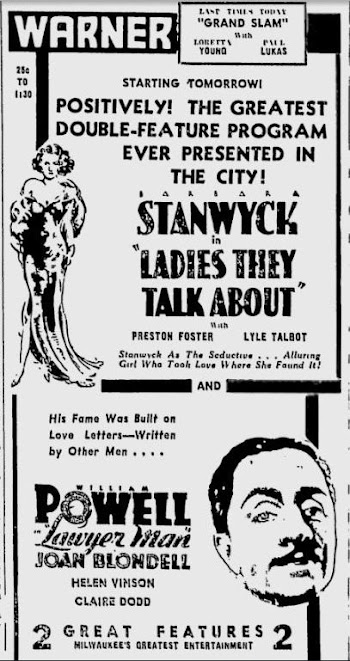 Here's my review of Barbara Stanwyck's woman-in-prison picture. I haven't reviewed Lawyer Man but I have seen it. William Powell may be hard to by as a shyster who rose from the slums and forgot his ethnic roots and virtues, but the movie's entertaining enough regardless.

Star teams are reunited in two releases this week, starting with the Wisconsin. 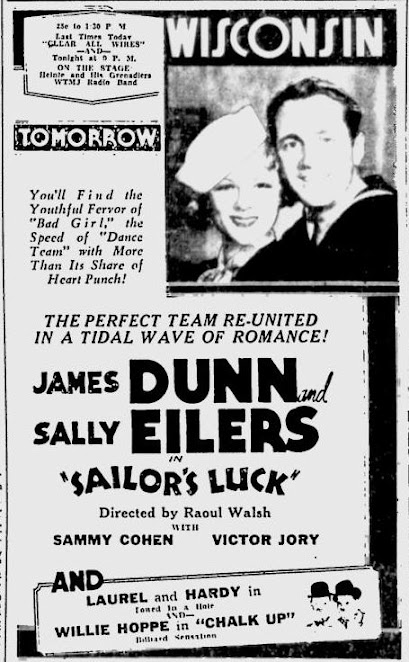 Never heard of this team? Neither had I, but Bad Girl, Dunn and Eilers's first teaming, was enough of a picture to earn Frank Borzage a Best Director Oscar. Sailor's Luck was the fourth teamup, but they only made one more.

Which team was more popular, Dunn & Eilers or Sidney & Murray? 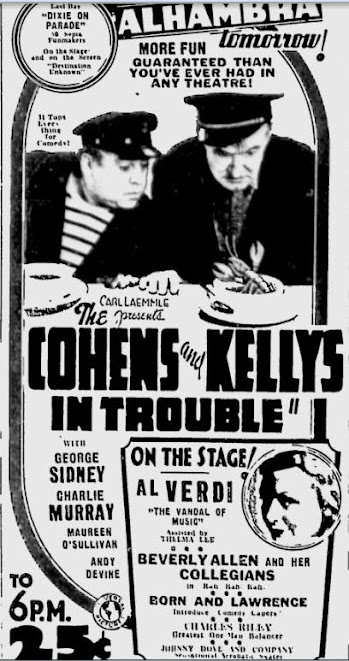 This is the sixth and last film in a comedy series dating back to 1926. The Cohens and Kellys films are an early milestone of Hollywood multiculturalism, being the adventures of Jewish and Irish families uneasily united by marriage, the comedy focusing on the misadventures of the antagonistic fathers played by Sidney and Murray. I've never seen any of these pictures -- has anyone lately?

Finally, a drifter unwittingly gets involved in a car-stealing racket and falls in love along the way. The title seems to summarize Dr. Eastman's feelings about Hollywood as a whole.
Posted by Samuel Wilson at 4:43 PM

Email ThisBlogThis!Share to TwitterShare to FacebookShare to Pinterest
Labels: 1933, pre-Code