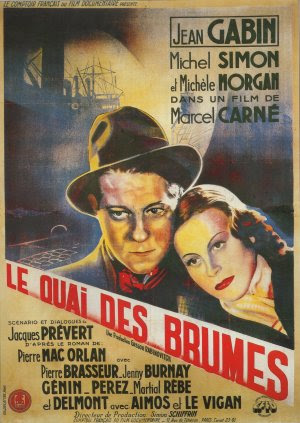 The French were in Vietnam long before us Americans, so it's only fair that France gives us cinema's first troubled Vietnam veteran. To be honest, I don't know for certain that Jean Gabin's character in Marcel Carne's crime drama is the first, but he's got us beat by more than a generation. Jean had some bad experiences with the colonial army in Tonkin and has been living in a kind of fog ever since. Back in France, he's deserted from the army but needs a change of clothes. He hitchhikes to Le Havre, nearly wrecking his ride by making it swerve to avoid a dog in the road. He's tender but tough, we'll learn. In the port city, he ends up in a waterfront tavern where he meets a depressed artist and a pretty young woman (Michele Morgan) and gets caught between some gangsters and an eccentric old man (Michel Simon) with an axe to grind about music. Quite conveniently, the artist commits suicide by going out into the water and bequeaths Jean his clothes and his identity papers, while the bartender wraps Jean's uniform around a rock and sinks them, hoping to hide the evidence of desertion. It doesn't quite work, and when the uniform pops up along with a body other than the artist's, investigators suspect a soldier in a gangland murder. Jean has no patience with the gangsters and spends a lot of time slapping around their leader, Lucien (Pierre Brasseur), whose bluster barely conceals some essential weakness. After a while, however, you'll wonder who the real bad guy is as we learn more about the ties between the Morgan and Simone characters. Jean falls for Morgan and Simon doesn't like it. But as the old man's menace dominates the story we'd all be wise not to forget Lucien's sulking, simmering rage.

Quai des Brunes often feels as if it was made by a French branch of Warner Bros. Gabin's take-no-crap toughness and redeeming romantic streak wouldn't be out of place on the actual Warner lot, while the short-lived plot detail of the suicidal artist may have been intentionally reminiscent of The Petrified Forest. Rather than imitating the Americans, however, Gabin had been setting a new standard for doomed antiheroes since his international breakthrough Pepe le Moko in 1936, and you could argue that his movies had some thematic influence on Warners' second major gangster cycle. The film as a whole is atmospherically gritty and romantically tragic in proto-noirish style. It has several strong set pieces, including an encounter between Jean and Lucien on bumper cars and a scene of Simon menacing Morgan set to some lovely music reminding us of Simon's pretentious tastes while the action belies his pretension. Simon and Brasseur make nicely contrasting villains, one burly and increasingly brutish, the other deceptively fussy and wussy. Overall, Port of Shadows can stand comparison with contemporary crime-film classics from the U.S. If you like them, you'll like this.
Posted by Samuel Wilson at 11:18 PM

It's a great movie. I think that this movie and Hôtel du Nord (also directed by Marcel Carné) are the two great masterpieces of the French poetic realism of the 30s. When French critics discovered American film noir in the 40s it was movies like Port of Shadows and Hôtel du Nord that they were comparing them to.

On your recommendation I'll have to check out Hotel du Nord sometime soon. It's curious that the French critics associated American noir with their own "poetic realism," since Port reminded me more of its contemporary American crime films than the stuff of a decade later.