I'm indebted to Ben at Breakfast in the Ruins for calling my attention to the death earlier this month of the Italian director Damiano Damiani. He was the director of A Bullet for the General, possibly the greatest Italian western not directed by Sergio Leone. He made only one other western that I know of, the Leone-produced comedy A Genius, Two Partners and a Dupe, but proved himself in other genres, particularly the contemporary crime film. In Day of the Owl (aka Mafia) and The Most Beautiful Wife he shifts our attention from the glamor of violence to the impact of crime and corruption on presumably powerless women. The latter is the more radical film, and the superior one in general, for its portrayal of a woman defying a corrupt, sexist society. Those are the only Damiani films I've seen -- I don't remember seeing his Amityville Horror sequel -- but they're enough to impress me. I actually own copies of two more of his movies, and I hope now to watch at least one of them to review in his honor later this week. Until then, follow the links on the movie titles to get a sense of what Damiani was capable of.

Gian Maria Volonte in A Bullet for the General 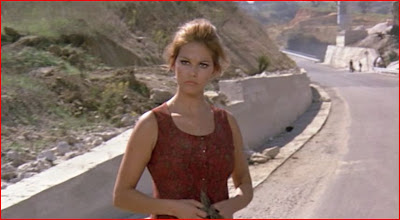 Claudia Cardinale in Day of the Owl

Ornella Muti in The Most Beautiful Wife
Posted by Samuel Wilson at 4:20 PM

Email ThisBlogThis!Share to TwitterShare to FacebookShare to Pinterest
Labels: Italy

You lost "La Piovra", the italian series from the 80s.

Can't lose what I never had, but this is mentioned in some places as his greatest achievement so I appreciate your mentioning it here.