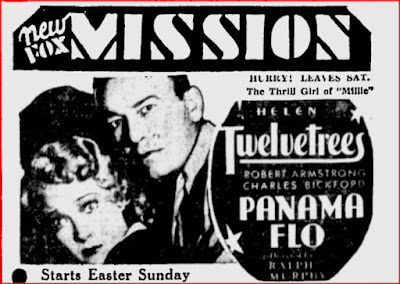 Charles Bickford's star was already slipping by the time this RKO Pathe picture directed by Ralph Murphy appeared early in 1932. Although he's once again the male lead, he's third billed behind star Helen Twelvetrees and antagonist Robert Armstrong. As in Bickford's earlier film The Sea Bat, his character gets the heroine on the rebound. This time Flo (Twelvetrees) is a chorus girl whose troupe, obviously blessed with the world's worst agent, is stuck in a Panama dive without funds to return home. The husky proprietress invites the showgirls to work for her, but Flo finds a sugar daddy of a sort in Armstrong's pilot, though her pride prevents her from taking money from him when he goes on a short expedition. The expedition proves not so short, and soon enough Flo is trained in the art of rolling drunks with big bankrolls. Dan McTeague (Bickford) gets good and drunk but knows a Mickey Finn when he sees one. By then, however, Flo has replaced his roll with a wad of rags, which she's handed off to her roommate. Once McTeague (shades of Greed!) realizes what's up, he nearly tears the joint apart until Flo confesses that the roommate has his roll at their apartment. In a nice sequence of tracking shots, McTeague drags Flo through the slummy streets to the flat, only to find that the roommate has absconded with the whole roll -- we see her boarding a ship and exiting the picture. Flo persuades Dan that nothing he might do to her will get his money back, so he makes him an offer: she can work off her debt as his servant on his South American plantation. Turns out that McTeague is an entrepreneurial geologist, convinced that he's discovered a massive oil deposit that once tapped will make him "King of South America." He makes little progress, however, his biggest accomplishment being the pile of broken bottles outside his window. Meanwhile, Flo has to deal with Dan's unwanted amorous attentions and the jealousy of the native girl she's replaced in his household. She has to hold Dan at bay with a gun for a time, but suddenly a plane appears above the plantation, coming in for an emergency landing.

Wouldn't you know it? It's Babe (Armstrong), whose unexpected appearance fills Flo with hopes of salvation. Somehow Babe learned that Flo was down here and he promises to rescue her once his fake repair work on the plane gets McTeague to let his guard down. For the moment Dan only sees a potential rival, not knowing Babe's identity but dimly remembering his face -- we remember that he saw Babe's photo in Flo's Panama apartment. Dan doesn't know the full nature of the threat, and neither does Flo until she finds Babe greedily going over Dan's notes. Babe knows enough to see that Dan's guess about the oil is right, and figures with his plane he can jump whatever claim Dan has to the land in question. This is a side to the doughy, weak-voiced Babe that Flo hasn't seen before. Remembering how she'd initially wronged Dan, she can't condone stealing from him. "Anyone smart enough to walk off with a million bucks is no crook," Babe corrects her, "He's a financier." But Flo is unswayed. She's willing to pull a gun on her erstwhile savior to keep him from robbing Dan. When Babe throws a chair at her, she's willing to fire that gun....

Panama Flo is told in the form of a flashback, and the framing story, which has Dan re-encountering Flo in a New York tavern, finally sinks the picture. Flo had fled guiltily after the shooting, but Dan tracks her down to pull a Liberty Valance on her, explaining that his shot, not hers, had felled Babe. The story now rushes from tragedy to farce as Dan tells Flo that his investments haven't panned out. Flo sneeringly tells him that hers have, pointing to a limo parked across the street as proof. She proudly makes her exit, crosses the street, and begs the driver to take her around the block, just for a gag. Nothing doing -- and we soon learn why. After Flo stalks off, Dan saunters up to the same car and driver -- they're his, after all -- instructing the latter to follow that girl and ending the film on a big huh? I'm guessing that Dan meant to test Flo, not wanting her to throw herself at him because he was now rich, while Flo's was just a show of that stubborn pride that makes Dan love her -- I think. I'm more certain that writer Garrett Fort bit off more melodramatic bs than the actors could chew at the end. Until then, Panama Flo is a mildly interesting look at a virtually unknown director. Ralph Murphy's filmography is an almost complete mystery to me, but he gives the camera a healthy workout here, especially in the Panama scenes. Beside the tracking shots I mentioned he keeps the camera mobile in Flo's apartment to dramatic effect when Flo threatens to throw herself out of an abruptly opened window after Dan threatens to have her thrown into a "hoosegow" filled with filthy drunks. Cinematographer Arthur C. Miller combines with Murphy for some nice proto-noirish effects, particularly a shot of a room illuminated only by a moonlit doorway and the moonlight outlining a brooding Flo as Dan enters. Third-billed he may be, but Bickford's brusque belligerence and his brillo hair dominate the picture, though Twelvetrees ("the Thrill Girl of Millie") holds her own. Overall, Flo has some good Pre-Code moments, but the plot is just a little too twisty for its own good, until the film strangles itself at the end.
Posted by Samuel Wilson at 11:27 PM