Now that Turner Classic Movies' annual "31 Days of Oscar" programming is done, the station can get back to the good stuff. The other day TCM devoted a morning of movies to rugged character actor Charles Bickford, who failed (being perhaps too gruff) as a leading man in early talkies but came back to give his most memorable performances from the 1940s forward (A Star is Born, The Big Country, etc.). Naturally TCM focused on the leading-man stuff, including this Wesley Ruggles picture filmed largely on location off the Mexican coast. Sea Bat is a pulpish adventure that reminds me of the extensive reading I've done recently in pulps like Argosy: plenty of camp or pseudo-exotica plus -- what the hell -- a giant monster thrown in. The picture is at pains to explain that "sea bats" are real, though better known zoologically as giant rays. They plague the boats that send divers down to harvest sponges in the Caribbean. One such diver, Carl (Nils Asther) is the beloved of Nina (top-billed Raquel Torres), the daughter of the island's governor. Susceptible to indigenous superstition, as those hot-blooded Latins will be -- she trusts in native charms to keep Carl alive. Pious Carl urges her to trust in the Cross instead. Carl promptly gets killed -- though his diving colleague and romantic rival Juan (John Miljan) has something to do with that. So does the Sea Bat, which sort of lands on Carl while his lines are snagged, before his mates can haul his crushed body back to the surface. This thing is a miniature Moby Dick, the effect being OK for the time and probably spectacular looking at the time. In any event, Nina learns the lesson you might expect from this tragedy and renounces the Christian religion, going almost completely native and dancing in dazed, awkward fashion during their heathenish rituals.

So where's the leading man. At long last Bickford appears in the livery of a minister of the gospel. It looks like we're headed for some Sadie Thompson action until we learn that Sims (Bickford) is an imposter, a wanted criminal on the lam in the islands. The usual complications arise as the locals urge him to perform his sacred duties and reform wayward Nina. Juan and some of the other sailors -- including Gibson (Greed) Gowland and Boris Karloff as a couple of battling grotesques -- have been trying to hit on the girl ever since Carl died. In the Pre-Code Play of the Film, Juan makes his move on the beach. As he grabs Nina by the arm, she reaches across his crotch and slowly draws a knife out of the scabbard on his belt in a manner that could not not be suggestive of giving the man a handjob. She breaks loose and stabs him slightly, but when Gowland and Karloff join the fray she leaps up on a rock as a storm breaks and offers herself to the man who'll kill the Sea Bat. Karloff (playing a "Corsican," not that you could tell) gets killed offscreen trying. Meanwhile, Sims makes a hard-boiled inspection of the native rituals, telling Nina, "I'm trying to decide if this is a jazz cabaret or just a madhouse." Dismissing the natives as "A lot of swine drunk on their own sweat," he advises Nina that "What you need is to have the black magic lashed out of you." It never quite comes to that, however. While Nina merely scoffs at his assumed religion, sacrilegiously kicking dirt on his Bible, Juan grows increasingly convinced that Rev. Sims is someone he knows of shadier background. 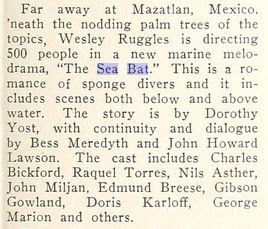 Poor "Doris:" Karloff was still a year from winning respect with Frankenstein, and this was but one of the indignities he had to endure while paying his dues.


It looks like an obvious set-up for love to bring both the apostate Nina and the imposter Sims back to the true faith, but at least the Bess Meredyth script doesn't go overboard with the spirituality. What happens is that once the Karloff character dies, Sims is pressed to perform a funeral service. Sims fumbles for appropriate words in his Bible and fortunately finds them, somehow moving Nina, already guilt-stricken over sending Karloff to his death, to repent her savage ways. All that remains is for Sims to win at least a moral victory over the Sea Bat and all ends happily -- except for Juan, of course. The picture as a whole benefits from the extensive location shoot -- an M-G-M specialty of the moment -- acceptable effects and punchy direction from Ruggles, -- who next directed the Oscar-winning Cimarron -- with uncredited help from Lionel Barrymore. It's nothing close to a classic, but Pre-Code buffs ought to enjoy it for its more outrageous moments, and anyone ought to be able to stand it for an hour and a quarter.


Nachthymnen Carcharoth has contributed a clip of the Sea Bat in action.
Posted by Samuel Wilson at 4:22 PM