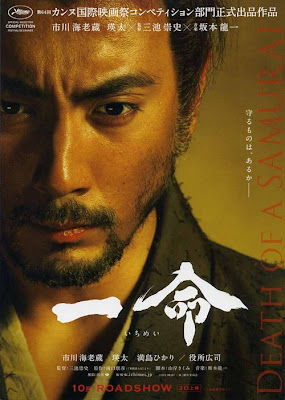 American movie buffs will recognize Takashi Miike's film as a remake of Masaki Kobayashi's 1962 Harakiri and wonder why anyone should remake a classic. Some Japanese fans might have felt the same way, but since both films are adaptations of a novel by Yasuhiko Tamaguchi there's no reason why you can't eventually have as many Harakiris as there are movies of, for instance, Les Miserables. My example has a point, since anyone moved by the grim portrait of oldschool poverty that even the musical version of Hugo offers should be moved similarly by either version of the Tamaguchi novel. The movie are more distinct for Japanese audiences, since they call the 1962 film Seppuku and the 2011 Ichimei. Nevertheless, the stories are the same, and I refer you to my review of Kobayashi for plot details. The two films differ in emphasis and more profoundly on the sensory level, for not only is the Miike film in color, but it was also made to be shown in 3D. It may be a virtue that you can watch it flat and not realize that you missed a dimension. Miike, often a provocateur in his prolific career, works in neoclassical mode here so you can appreciate the widescreen framing and cinematography without ducking at simulated flying gore. You get the impression that he respects the source material, both the novel and the earlier film.

The biggest difference I can see, relying on my memories of the Kobayashi film, is Miike's gimmick of the hero, Tsugumo Hanshiro (kabuki star Ichikawa Ebizo XI) taking his righteous anger out on the heartless retainers of Ii with a bamboo sword similar to the one they made his hapless son-in-law Chijiiwa Motome (Eita) use to commit seppuku. This is a good idea, since Miike has stressed how torturously difficult it is to disembowel oneself with such a weapon. It creates the impression that Tsugumo wants to inflict pain rather than death on the cruel samurai and teach them a lesson in the process. Miike also stages the final battle in snowy weather, most likely to show off the 3D by adding a layer to the image. It looks quite nice flat, too.

Overall, cinematographer Nobuyasu Kita makes a good case for color alone justifying a remake. But the story itself is the best justification of all. If anything, a story of a man forced out of honorable employment and watching helplessly as his child sinks into poverty and sickness has more resonance for Japanese and global audiences today than it had 50 years ago. When I reviewed the Kobayashi version I compared it to Vietnam-veteran films, given the hero's samurai status, but modern audiences should simply see poverty without worrying about the man's profession. Miike seems to stress the poverty of his protagonists more consistently than Kobayashi did. I recall their poverty seeming more genteel for at least part of the earlier film before the illness of Tsugumo's daughter and grandson precipitates a crisis, while even in color the family home in the Miike looks darker and more drab throughout. Miike plays for pathos more blatantly, aided by a poignant score by Ryuichi Sakamoto, but this isn't an inappropriate course to take with this story. The more abject the family's plight, the more righteous is Tsugumo's wrath at the climax. Also helping justify that cathartic violence are the performances of the Ii retainers. I was particularly impressed by Munetaka Aoki, who took over Testuro Tamba's performance in the original as the bullying retainer who refuses to finish off  Motome despite his agony with a broken sword. Since Miike truncates the story's duel between this bully and Tsugumo, Aoki gets by mainly with a formidable and not unhandsome glower and a hissible contempt for the weak, and that's enough. He could play villains for life with that face. The whole cast benefits from Miike's strong sense of dramatic pacing in the very formal dialogue scenes that frame the non-linear story. The sustained deliberation sustains suspense, even for viewers familiar with the story from the earlier film.

My first impression is that Miike doesn't equal Kobayashi, primarily because Ichikawa Ebizo doesn't equal Tatsuya Nakadai in the lead role. But the new Harakiri is a worthy effort that proves the story evergreen. The flashbacks and the pathos and the righteous anger worked before, work now and probably could work again a generation from now. We may not have needed Miike's Harakiri, but I'm glad we have it.
Posted by Samuel Wilson at 11:29 PM

I haven't yet seen this Samuel, but as a huge fan of Kobayashi's masterpiece and an admirer of Miike's work (13 ASSASSINS for example is proof parcel of his visceral talent) I would well imagine it will live up to your superlative summary judgement, even while not quite equaling the celebrated original.