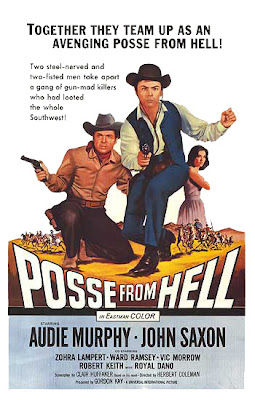 As a rule I avoid watching films made after 1953 on Encore Western, since the premium cable channel, catering to a demographic presumed not to have upgraded to HD and annoyed by black bars at the top and bottom of their screens, resolutely refuses to show its movies in the letterbox format. But I've had an appetite for western stories recently -- part of a larger appetite for pulpish fiction that may result in something new soon from the Think 3 empire -- and have started recording more of Encore's B and B+ product from the golden era of Hollywood westerns. That brings me to the feature-film debut of Herbert Coleman, who made just one feature more. The real auteur here seems to be screenwriter Clair Huffaker, adapting one of his own novels. Huffaker had a violent, hard-boiled sensibility that takes some of his scripts, particularly 1964's Rio Conchos, right to the border of spaghetti westerns. As a novelist, Huffaker was most inspired in 1958, when he wrote Guns of Rio Conchos, Flaming Lance (filmed by Don Siegel as Flaming Star) and Posse From Hell. The movie of Posse From Hell is an Audie Murphy vehicle, but the war hero, starting his slide from A pictures, is backed by a solid cast of character actors. Murphy plays Banner Cole, a gunfighter called into the misnamed town of Paradise to lead a posse against a gang of vicious hell bastards including Vic Morrow and Lee Van Cleef. Prison escapees, they rode into town, robbed the bank and made good their escape after invading a saloon and taking its denizens hostage. Morrow, the leader, threatens to shoot a hostage every five minutes and proves his point by killing the hostage he'd appointed his spokesman. To hunt down these terrors, Cole ends up with a motley crew he's quick to dismiss as worthless to a man, but over time he distinguishes the wheat from the chaff. The posse includes such stalwarts as Robert Keith (crazy old army man who thinks he can give orders), Royal Dano (desperate uncle of the girl kept by the gang as hostage and later rape victim) and Rudolfo Acosta (intelligent unstereotyped Indian tracker), but the standout of the group is John Saxon as a bank employee recently arrived from the east and assigned by his employer to recover its money. Neither Huffaker nor Saxon overstates the character's greenhorn aspect, that point being made most harshly early when Saxon, after his first ever full day in the saddle, needs alcohol applied to his ravaged rear end. The young actor impresses the most out of the whole cast as someone who starts out just slightly prissy and hesitant yet quickly proves himself willing to learn while acquiring a different set of priorities from his bank employers. The camaraderie among Murphy, Saxon and Acosta -- the posse in its final form after the more dysfunctional members die or quit -- is the best thing about the picture, especially the way the other two take a think-nothing-of-it attitude when Murphy haltingly apologizes for having earlier lumped them with the other losers in the posse.

Coleman was not exactly a visionary director, so I felt I wasn't missing much by having the sometimes setbound picture cropped. Huffaker keeps the story moving and Coleman follows along efficiently enough. Murphy really isn't much of an actor but he plays off the varied character cast effectively within the limited scope of his laconic character. Morrow is so intriguingly mad at the start that it's disappointing that he doesn't get to do much more the rest of the way, but Van Cleef gets a nice death scene, begging for help as Murphy and Saxon pump him for info on his cohorts. The most noteworthy thing about the picture visually is its violence. Men go down hard when shot and their shirts are impressively bloody when we see them close. The degree of brutality doesn't approach the savagery of Rio Conchos or its Italian peers, but it elevates Posse From Hell somewhat above the bland norm for B westerns, as does the sheer number of good actors involved. It's no more than a solid B-western, but that's still better than a lot of far more expensive pictures these days, and anyone with an appetite for unpretentious western action ought to be satisfied for 90 minutes by this one.
Posted by Samuel Wilson at 11:59 PM