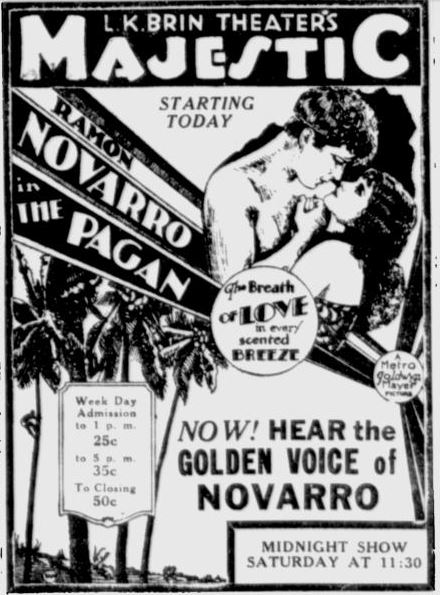 Things changed fast during the conversion from silence to sound. Attitudes changed -- the Depression had a lot to do with that -- which is why I don't often include silent movies in the Pre-Code Parade. Here's an example: Pre-Code's idea of a noble savage is Johnny Weissmuller as Tarzan; silent cinema's idea, at least as demonstrated in The Pagan, is Ramon Novarro. That's a big difference, and it reflects a changing idea of the primitive. "Nature in the raw is seldom mild" was a catchphrase of the Pre-Code era -- it was an advertising slogan for Lucky Strike cigarettes. The men who became stars in those years were rugged, violent types -- Cagney, Gable, Weissmuller in his special niche. "Caveman" was a word often used to describe such personalities. M-G-M's Tarzan lived in a world of perpetual violence; animals were always out to eat him or Jane, or simply to kill them for the savage pleasure of it. Part of Weissmuller's appeal for Pre-Code (i.e. Depression)  audiences, apart from his being a stud, was Tarzan's obvious prowess as a provider. Ramon Novarro's Henry Shoesmith could hardly be more different in his indifference to basic economics. He's no weakling, as W. S. Van Dyke's picture will prove, but whereas for Tarzan the primitive world is a jungle, for Shoesmith it's a paradise. He's a half-caste, orphaned son of a white father and native mother -- the opposite combination was probably unacceptable to contemporary audiences -- and heir to a sizable plantation on a South Seas island. He takes after his mom, a title tells us, which means he lives like a native, loinclothed, negligent of the general store his father had built, flourishing on the fat of the land. And the film asks: why not? For Van Dyke Pagan was a follow-up to White Shadows in the South Seas, his collaboration with documentarian Robert Flaherty, and like that film this one was largely shot on location to picturesque effect. Like White Shadows, Pagan portrays island life as innocent and unworldly and menaced by the "white shadow" of commercial exploitation. In Pagan the shadow takes the especially menacing form of an earringed Donald Crisp as Slater, a trader in search of copra, the raw material for coconut oil. He has a half-caste ward, Tito (Dorothy Janis), whom he's zealously trying to civilize and Christianize. Slater is scandalized at Shoesmith's neglect of his business and his backslide into paganism, and is even more alarmed at his obvious interest in Tito, as is Madge (Renee Adoree), Henry's American would-be girlfriend. It's a one-sided culture clash, since Henry isn't interested in clashing. He just doesn't get Slater's attitude. "I don't get angry just because you're different," he chides the trader. In fact, he goes overboard to be accommodating in his naivete. Slater wants to buy Henry's coconuts to harvest them for copra, but Henry lets him have them for free. He has too many and he'd get sick if he tried to consume them all himself.

Henry does take some of Slater's advice to heart. The trader holds out the possibility that Henry might win Tito's hand if he becomes more of a responsible businessman. Inspired, Henry briefly turns into something like Harold Lloyd, bumbling with bolts of cloth as women wait impatiently in his store. He still doesn't really get it, however, since he lets everyone buy on credit. After all, he just borrows more from the bank whenever he needs supplies -- but little does he realize that a trap has been set for him. Slater is the banker, and when the loans come due he's not content simply to "write it in the book" as Henry does with his customers. He forecloses instead, while Henry retreats with a shrug to a hut deeper inland, with Tito in tow. But Slater never seriously intended Henry to win her; he wants the girl for himself, despite Madge's warning that Henry is half-native, and "natives take their women." Slater proves good at taking himself, but Madge (who sees the hopelessness of her own situation but still likes Henry and Tito) has an answer for that, too. Henry is also half-white, of course, and "white men fight for their women." A distinction without a difference? Perhaps. Either way, it means that Henry and Slater are going to have it out in a wobbly rowboat as the sharks circle closer....

Only three years separate The Pagan from Tarzan the Ape Man, also directed by Van Dyke, but the cultural gulf seems far more vast. Nothing may illustrate that more starkly than M-G-M's decision to promote The Pagan as the debut of Ramon Novarro's singing voice. For the most part, the vocal track is pretty poorly synched to the image on screen, indicating that most of the picture was actually shot silent. This sparked some suspicion that Novarro, like his imagined contemporary Lina Lamont and his real-life peer Richard Barthelmess, didn't do his own singing. But viewers familiar with the look of part-talkies will notice at least two moments, both brief, where the speed of the film changes and Novarro actually appears to be singing "live" for the camera. One of these moments comes toward the end of the clip shown below, uploaded by frankieparis16.


This may not be your idea of what a "Pagan Love Song" sounds like, but it does express silent Hollywood's ideal of idyllic "pagan" life, at least as lived in the South Pacific. That idyllic ideal persisted into the Pre-Code idea and beyond in films like Bird of Paradise, but for Depression audiences the dystopia of Africa and the myth of an animalistic hunter-provider proved more compelling. With that change came a turnover in male talent that was perhaps most pronounced at Novarro's studio, where many of the leading men of M-G-M's late silents -- including John Gilbert, William Haines and Buster Keaton -- were gone within five years of The Pagan. Novarro himself held out longest of this group, thanks to his versatility as an all-purpose ethnic, but by 1934 M-G-M was done with him as well, while he-man Clark Gable had become King of the lot if not of all Hollywood and brutish Wallace Beery was one of the studio's biggest stars. Sound and the Depression had a lot to do with this, as silent archetypes became obsolete and newly revealed voices undermined actors' images. On its own merits The Pagan is an entertaining oddity, likely to be embraced for its criticism of capitalist values, but the film's real value is as a document of the fantasies of a specific moment in American history. It seems archaic now, after 84 years, but it probably seemed archaic after 4 years, and not just because it didn't talk. Nevertheless, it tells us something, depending on how we look at it.
Posted by Samuel Wilson at 3:16 PM