Less than one month after the inauguration of Franklin D. Roosevelt, media mogul William Randolph Hearst and the Metro-Goldwyn-Mayer studio present their fantasy of what a new President ought to do. 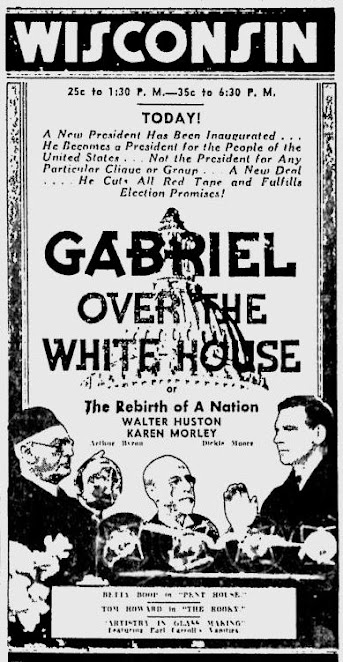 Directed by Gregory La Cava, Gabriel Over the White House is one of 1933's most retroactively disturbing pictures and perhaps the year's most overt expression of a widespread longing for strongman government bordering on dictatorship from which most people (including Hearst, who soon turned against FDR) quickly retreated. Reportedly it was too strong even for its time, at least in its original form. Cinema czar Will Hays ordered last-minute cuts of material presumably even more provocative than what we have left. Meanwhile, Hearst heavily promoted this picture, one of his Cosmopolitan productions released in collaboration with  M-G-M. The Hearst-owned Milwaukee Sentinel ran a serial novelization of the story. A rival paper, the Journal, ran this review; the reviewer didn't hold the film's paternity against it.

Gabriel's fantasy has a constraint built in. The film's premise is that only divine intervention can give the country the leadership it needs. Until then, President Judd Hammond (Walter Huston) is little more than a boob, largely indifferent to the nation's pressing problems. He becomes a changed man after miraculously surviving a car wreck, but it's a kind of mixed miracle once it dawns on us that Hammond maybe didn't really survive. Instead, and to justify the title, an aide speculates that the President has been possessed by none other than the Archangel Gabriel, who for some reason has a special interest in the United States. Advertisement and review alike describe the transformed Hammond as "of the people;" in fact he is a virtual dictator, cutting "red tape" like so many Gordian Knots. Such leadership is needed not just to kickstart the economy but to deal with the problem of organized crime. The movie blames immigrants for much of the gangster plague, and in a brutally symbolic scene a number of gang leaders are executed by firing squad at Ellis Island (if I recall right) while numerous others are deported under the gaze of the Statue of Liberty. Despite everything, a belief in limited government still prevails insofar as Hammond, like the dictators of the Roman Republic, has a specific mandate for action. When his mission is accomplished, culminated by the signing of an international peace treaty (after the great powers are brought to the table by a U.S. weapons buildup) the guiding spirit leaves the body and Hammond drops dead. Gabriel is a film impossible to appraise in conventional good-or-bad terms since it is so much a document of its time, more a political than an artistic statement. It's one of 1933's most fascinating cinematic events.
Posted by Samuel Wilson at 1:01 PM