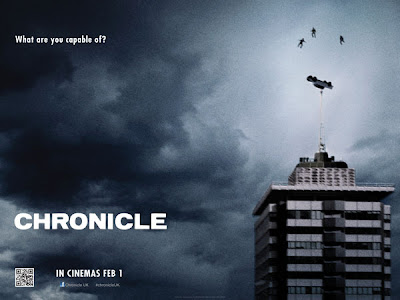 To the extent that Josh Trank's tale of teenagers with superpowers is part of the currently fashionable "found footage" genre, it's an abject failure -- and that's almost cause for relief. At no time are you convinced that you're actually seeing the story through the lens of a kid's video camera; the cinematography, the lighting, the framing are simply too good -- too professional. To maintain the premise that everything we see is something somebody filmed, Trank and writer Max Landis have to introduce an otherwise pointless character -- she eventually gets to be an archetypal damsel in distress -- who, like one of our three protagonists, obsessively records everything. For the big climax they give up any pretense that the story comes to us from one or two points of view, giving us a montage of news footage, security cameras, anonymous video footage, etc.  Trank could just as well have simply shown us some characters toting cameras -- maybe as an ironic commentary on the found-footage craze, and filmed his story as a conventional narrative, since he has little to say on the recording compulsion apart from suggesting that the camera is a metaphorical wall between the recorder and his subjects. This seems true for Andrew, the misfit of our teen trio and the film's eventual supervillain, but is it true of Casey, the video girl who befriends Matt, Andrew's cousin and eventual superhero? 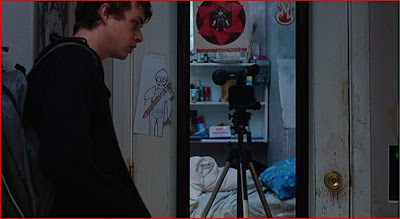 In any event, that question fades as the film becomes less about the recording compulsion and more about an inevitable reenactment of superhero tropes, and as a whole the film is better off whenever it comes closest to shrugging off the found-footage gimmickry. Chronicle is the rare film of which I can say that it should have been in 3-D, but wasn't. Its most spectacular moment comes when Matt and Casey are driving through scenes of telekinetic chaos in the streets of Seattle, only to have their car lifted high into the air and left floating near the tip of the Space Needle as Andrew appears to menace them. The scene is shot from inside the car and the effect achieves the immediacy and spontaneity that found-footage movies aspire to -- but it would have worked just as well without the pretense that Casey is carrying a video camera throughout the experience. 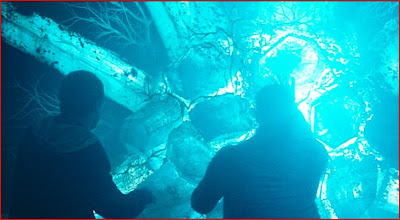 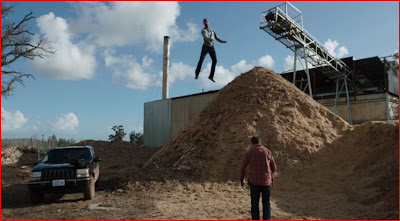 Trank's pretentiously generic title tells us that he plans to play with archetypes even as he plays at realism. He and Landis give us an origin story for his teen trio involving an alien artifact and a vague transmission of energy and power. As with M. Night Shyamalan's Unbreakable, the culmination of the story is the emergence of a supervillain. In Chronicle's case, despite a mythic warning against hubris, the villain is driven not by greed or ambition but by a pile-up of petty hurts and hatreds. Andrew lives a wretched life with an alky dad on disability and a dying mother whose expenses are bankrupting the family. He's a defensive loner and despite his pals' urging that he take advantage of his new powers to make himself cool -- the effort seems to pay off at a talent show were he passes himself off as a magician -- his awkwardness is incorrigible. His road to moral ruin starts when he pukes on the brink of his first sexual experience. To compensate, he envisions himself as an "apex predator," a Homo superior if you will, though he comes across more like a Columbine shooter. Unfortunately for the picture, Dane DeHaan, the actor who plays Andrew, can't transcend the character's predetermined nature or the script's confusion over whether we should pity Andrew for his miserable background or despise him as a loser at heart. 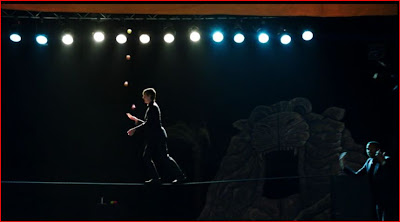 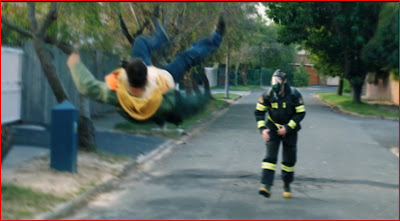 When Strikes the Fireman! 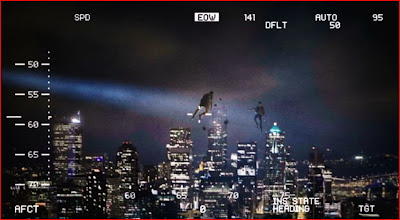 Chronicle's climax leaves the actors hanging, not the audience.

Chronicle rises or falls on its illusion of a superpower breakout in the real world. But the effect of its effects are inconsistent. The big fight scene over Seattle often looks just as a superhero fight should; the folks at Marvel Studios should take notes against the time when they can't just have the Avengers fight another horde of anonymous alien war machines. Long shots of bodies hurtling through the air are also queasily evocative of the September 2001 terrorist attacks, but if this film didn't evoke 9/11 it would be missing both an opportunity and part of its own point. Yet while bits like the car's predicament in the sky are highly effective, some effects are downright poor. Many of the flying scenes self-evidently involve actors dangling from cranes; there's a difference between floating and dangling, but this film's crew didn't figure that out. Meanwhile, one moment may feature brilliant camerawork, and another will have the actors dangling on an obvious soundstage in front of an obvious two-dimensional backdrop. Times like those make it hard to endorse this movie, but Chronicle has a primal energy in its best moments and enough visual imagination at its most inspired to make it worth a look, though more for superhero fans than for found-footage fetishists.
Posted by Samuel Wilson at 12:33 AM