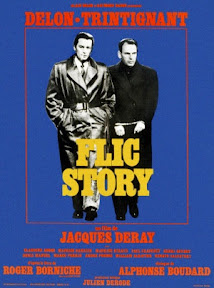 The poster for Jacques Deray's police procedural spoils the story -- it shows fugitive Jean-Louis Trintignant in cuffs and in the custody of cop Alain Delon -- but French audiences were presumably quite familiar with the story, anyway. Flic Story (that's the actual French title) was adapted from the memoir of Roger Borniche (Delon), the still-living cop (flic) who took nearly a decade after World War II to track down robber and murderer Emile Buisson (Trintignant). Anyone interested in Borniche's story knew how it turned out, so the primary interest, apart from seeing the two stars in action against each other, had to be in some subtext. In fact, Flic Story feels like a film that requires you to know more about France's modern history in order to appreciate fully. As it is, Deray's film (a Delon co-production) is most likely to remind American viewers of films about the early days of the FBI and its pursuit of archetypal public enemies like John Dillinger. Borniche's pursuit of Buisson is complicated by jurisdictional jealousies between Borniche's "federal police" (known to fans of Inspector Clouseau as the Surete) and the national gendarmerie. The pursuit of Buisson is also an assertion of power, and sometimes an abuse of power. Borniche opposed his own colleagues' resort to beatings of prisoners for information; Delon is the "good cop" here, trusting to his powers of persuasion rather than brute force. The long manhunt also had a political context that Americans can't immediately comprehend. At one point someone reads aloud from L'Humanite, France's communist daily, which demands drastic action against Buisson and cites his continued freedom as proof of the authorities' indifference to working-class life. Later, on a perhaps unrelated note, Buisson explains that a copy of Le Figaro, a conservative daily, enhances one's disguise because no one expects a criminal to read such a "serious" newspaper. I get some of the subtext, but I suspect that there's more to it that I don't get, and that there's an inherent limit to Flic Story's accessibility for non-French audiences. 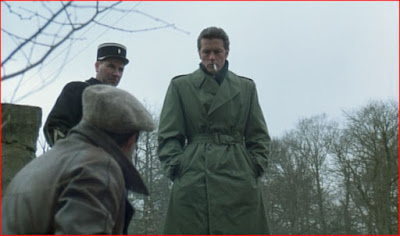 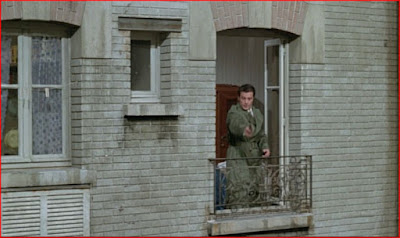 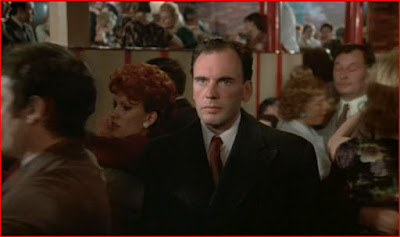 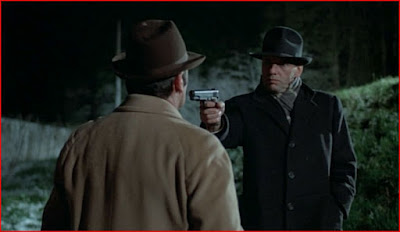 Context or subtext aside, how does Flic Story work as a period procedural or crime thriller? It's less a genre exercise than a showcase for the two stars. Trintignant, whose star career extends from Roger Vadim's And God Created Woman to the forthcoming Michael Haneke Palme d'Or winner Amour, seems to get the short end here, since Emile Buisson was, on this evidence, no Dillinger. He is simply mean, and Trintignant gets to do little besides glower and shoot people. He does this well and makes Buisson a convincing monster, but was someone of the actor's stature necessary for that? He was probably more necessary as a worthy antagonist for Delon, whose kind of film this was. Literally speaking, Delon has at least five flicks with flic in the title in his filmography. This one isn't one of his all-out action vehicles; it's in the same conscientious mode as his anti-death penalty picture Two Men in Town. His best scene here is his confrontation with a vicious fellow officer who tries to defend his brutal tactics by saying that Borniche would do likewise if Buisson had victimized one of his relatives. Borniche counters by recounting that his actual brother was tortured to death by the Gestapo, thus explaining his opinion of torture. Like Two Men in Town, Flic Story ends with an execution, but not before an odd epilogue narrated by Delon about the evolution of Borniche's relationship with his "pal" Buisson during months of interrogation. The point this time seems to be that a hardened criminal's humanization has its limits. Buisson can't repress his desire to torture and kill yet another informant. It isn't exactly a vindication of capital punishment, but it's probably true to the non-fiction source material. Flic Story's fidelity to its source probably limits its potential for genre sensation, though the true story does offer opportunities for plenty of car chases, shootouts and plain old murders. As a period piece it has a drab production design appropriate to a period of privation. Deray stages some scenes well but some have a monotonous soundstage look and nothing is especially memorable visually apart from Trintignant's dead-eyed glower. This film will most likely be memorable for those to whom the true story is most meaningful. The rest of us will find it competent at least, but probably disposable at the end.
Posted by Samuel Wilson at 9:26 PM

You've dug of another film that I can't say I know anything about, but in the end you shoveled the dirt right back on top of it. Ha! Just saw the distinguished Trintigent in a somewhat similar mode in THE GREAT SILENCE, and look forward to his work in AMOUR.