If I've seen one thing so far in my survey of 1962 that I didn't expect to see, it's the phenomenon I call Cleosploitation -- the exhibitor strategy of exploiting the gossip surrounding the affair of Elizabeth Taylor, then married to Eddie Fisher, and Richard Burton on the set of Cleopatra, a film still a year from opening, by showing a double feature of one Taylor and one Burton film. As I've remarked before, the gimmick must be working because theaters keep using it. Here's the latest example I've found, from Eugene OR.

But on to more conventional exploitation. This title, advertised in Hendersonville NC, probably promises more than it can deliver to the imaginative reader. 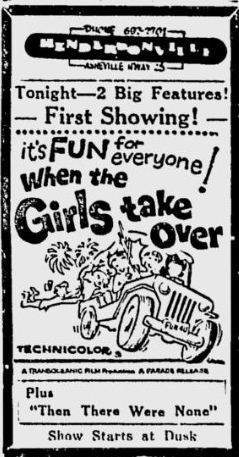 Veteran B-western actor Russell Hayden directed (for the only time in his career) this comedy about a Caribbean revolution defeated by sex. Even that description promises more than this picture is likely to deliver. But why not judge for yourselves? The film's in public domain and you can watch it on YouTube here.

Now for some adults-only fine-art cinema from Milwaukee. 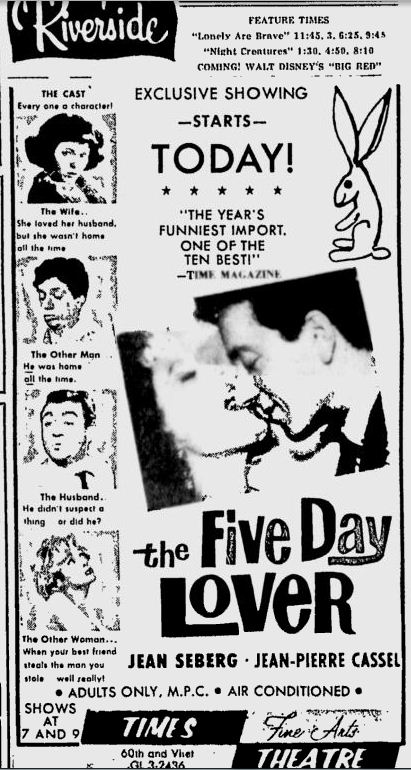 Jean Seberg was a known quantity for Americans both for Otto Preminger's attempts to make her a star and Jean-Luc Godard's arguable success on another front with Breathless. Here she headlines a Philippe de Broca romantic comedy. De Broca's name would come closest to meaning something to Americans following the release of King of Hearts later in the decade. I have no clue about the meaning of the rabbit.

Things get just a little sleazier in Toledo. 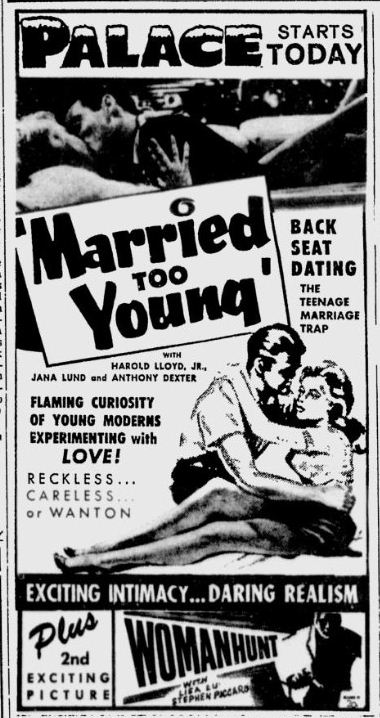 It was rumored at one time that Ed Wood had a hand in this screenplay, but this authority finds little evidence for the claim in a purportedly dull J.D. picture. We have a trailer for this one, courtesy of captbijou.

Finally, in Pittsburgh, ...well, the fruit is ripe!

From France and writer-director Louis Solanes comes this drama of competing passions among seasonal fruit pickers. The more literal translation of the actual title, if you can trust Google with such matters, is "The girls sow the wind," which would seem to promise a sequel, "The girls reap the whirlwind," or in American, The Fruit is Rotten. But seriously, this was Solanes's first film as a director. Though still living, he hasn't directed another, says IMDB, since 1970's Africa Erotica. Star Scilla Gabel may have been familiar to Americans for a number of films ranging from Tarzan's Greatest Adventure to Mill of the Stone Women. But she wasn't enough of a name to be included in the ad. The content rather than the cast mattered most, I suspect, for the target audience.

Happy D-Day, everyone!
Posted by Samuel Wilson at 7:00 PM