To be honest, I haven't really been giving readers an accurate picture of moviegoers' options fifty years ago. There's an entire category of pictures that I've excluded to date: re-releases. Before VHS and DVD, if a studio hadn't sold a picture to television they always had the option of re-releasing it, usually as part of a double-bill. Exhibitors hoped to bring in people who remembered a picture fondly from their first viewing but hadn't seen it since, as well as people for whom the old movie was practically new, since there was no place else to see it but the local movie house. Sometimes an old movie would come out under a new name, though it would have been impossible to pitch "Red Hot Wheels," the re-release title of the 1950 Clark Gable picture To Please a Lady, as a new show, since Gable had died in 1960. Some re-release packages keep turning up all over the country throughout the year. Later this week you'll see some artwork for M-G-M's medieval-themed pairing of Ivanhoe (1952) and Knights of the Round Table (1954). In June, Universal started sending various packages of Abbott & Costello, Francis the Talking Mule, and Ma & Pa Kettle movies around the country under a general "Corn" rubric -- thinking to draw whom, exactly? But for now, to give you an idea of what I'm writing about, here's a re-release double bill opening this day in Miami. 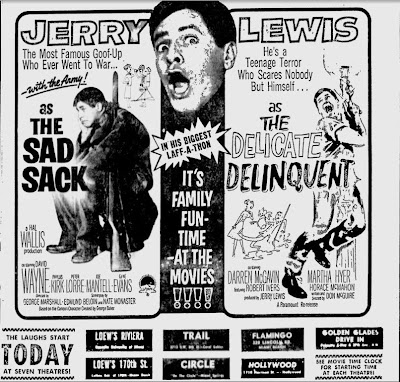 These are Jerry's first two solo films, from 1957. His most recent release, The Errand Boy, had played first-run houses last Christmastime. Meanwhile, in Daytona Beach, the following may only have seemed like an old movie. It was, in fact, spanking new. 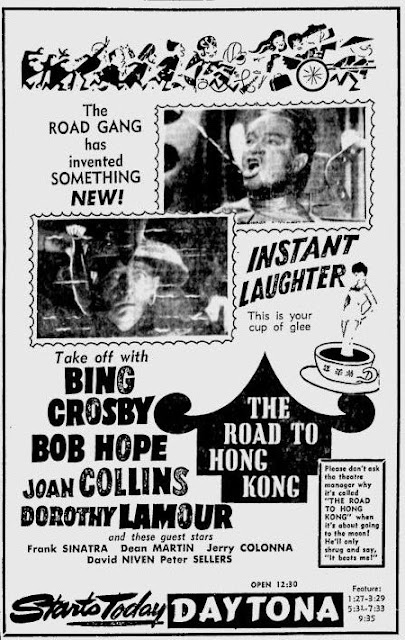 That disclaimer in the lower right is one of the strangest I've seen -- someone's idea of absurdity, I suppose. But do you wonder why this flopped? Then look at this clip in which the boys grasp at relevance by bringing Peter Sellers in for a cameo. Rolko52 uploaded it.

Keeping up the comedy theme, we move to Milwaukee for a French farce. 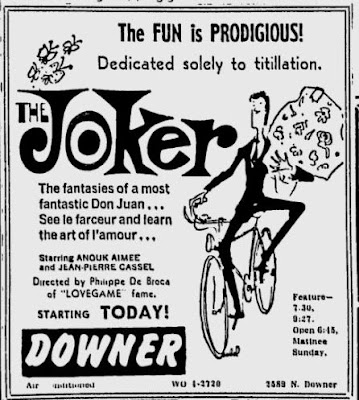 In some markets, Philippe de Broca has become a bankable name -- or so exhibitors hope -- and that's before the pictures he'd eventually be best known for reach the country. At the very least, this ad tells us that Love Game went over well in the U.S.

Continuing in an international vein, here's a Mexican movie imported by the legendary K. Gordon Murray, here proving that he handled more than horror movies and wrestling pictures. Of course, you can't tell from this Pittsburgh ad that it's a Mexican picture, but what you don't know... 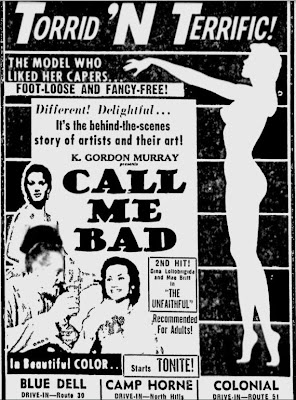 The second feature is a 1953 Italian comedy co-directed by Mario Monicelli, of Big Deal on Madonna Street, and Steno, of Flatfoot in Hong Kong.

Back to red-blooded American trash, here's a TV parody opening in Toledo from the director of The Thing with Two Heads. 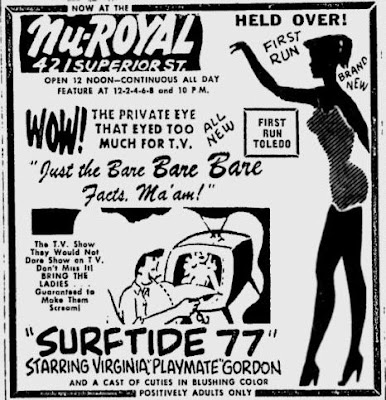 This is specifically a parody of the show Surfside 6, but since I've never seen that I can't say much about this. But Something Weird has the dope on this picture, and they'll show it to you -- for a price.

Finally, back to Milwaukee for a change of pace -- WAR! With a special live attraction... 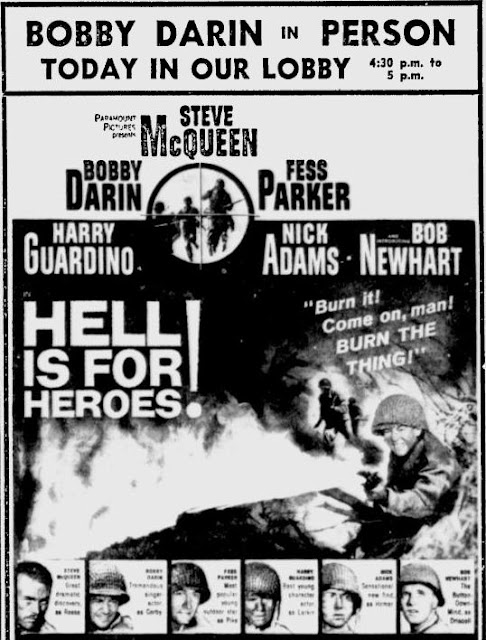 Darin would be performing in town that weekend.Some of the advertising for this picture, which went head-to-head with Merrill's Marauders in many markets, stressed the number of TV stars in the cast. Note the emphasis on Bob Newhart, however, who was big off comedy albums and stand-up in this period. Just who you want in a Don Siegel war movie, but maybe the trailer will work for you. Bobbyfan 64 uploaded it.

Posted by Samuel Wilson at 7:26 PM

Email ThisBlogThis!Share to TwitterShare to FacebookShare to Pinterest
Labels: 1962, U.S.