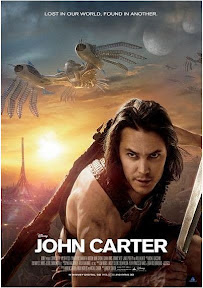 Someday Andrew Stanton's debut as a live-action director will be judged on its merits, apart from a marketing campaign that already lives in infamy. Was Stanton sabotaged by incompetent marketing? Did millions hesitate over seeing the picture depending on whether or not the word "Mars" appeared in the title? It's hard for me to say. The real question, I suppose, is: was a good movie sabotaged and made into a historic flop by bad marketing? But that only begs the question of whether John Carter is a good movie. Some say so now, probably, and more may want to say it later in a spirit of revisionism. But before revisionism becomes an end unto itself, I have to say that Stanton's Carter wasn't very good. It is nowhere near as bad as Paul W.S. Anderson's Three Musketeers (though both films share some physical uncertainty about a falling body's effect on a small boat), and it will look like an enduring classic compared to such recent stuff as Immortals or Red Riding Hood. But if not mediocre, Carter is also a hopelessly mixed bag. At moments, and most often when the focus in on Tars Tarkas (Willem Dafoe) and his Tharks, Stanton taps successfully into the sword-and-sorcery (make that sword-and-super-science) vein he sought for throughout. I don't mean to overrate the Tharks -- such actors as Dafoe and Samantha Morton do strong voice work and obviously contribute something to the motion capture animation, but in a mass they tend to look alike in a monotonous, video-gamey way -- but the film is almost always duller whenever Tharks are absent, while it's at its best when Carter (aka "Virginia" thanks to an initial misunderstanding of English) interacts with the green warriors, their rebellious daughters, their goofy pets, etc. That tells you something about the virtues of cinematic barbarism, perhaps, but it also says something damning about the actors playing in their own skins.

Most damned (and double-damned this year as a star of Battleship) is Taylor Kitsch in the title role. He fails to convince as a 19th century fighting man, and while I'm by now prepared to take anachronistic acting for granted, he fails even by diminished standards. To be fair, he's stuck with a badly written character in the predictable yet still peculiar manner that passes too often for cinematic heroism these days. This film's John Carter is another of those reluctant, damaged, sullen heroes who want to be left alone most of the time. The film is coy about the source of his hurt until the big reveal comes in the middle of one of Stanton's best fight scenes, which ceases to be one. Turns out that Stanton's Carter lost his wife and child in a fire during the Civil War or thereabouts, and his remembered grief fuels a rage unleashed against savage pursuers. We learn this as Stanton intercuts between the fighting, with Carter leaping and slashing as the lesser gravity of Mars allows, and flashbacks to Carter burying his family. He often "rhymes" the shots in a way that'd look clever in a comic book but comes out crassly mawkish here. It's the most mismatched montage since Steven Spielberg's Munich, when Eric Bana's character visualized the Munich Olympic massacre while making love to his wife. And from what I'm told, there's no basis in Edgar Rice Burroughs for such a grisly flashback. Modern writers, however, want their heroes damaged or impaired in some way that must be overcome before the characters can actually be heroes. So Carter must overcome a grief-grounded fear of commitment before he takes a definite stand. If he just did the right thing and enjoyed doing it, I suppose we'd suspect his attitude or his motives for one reason or another.

On the other hand, maybe Stanton had to stress Carter's internal struggle because he knew he was stuck with some supremely boring villains. As the main aggressor on Barsoom, Dominic West has practically no personality. The film explains this somewhat by making him a puppet of the more advanced and wickedly manipulative Therns, but then the Therns themselves (led by Mark Strong) are boring. This crew makes Mickey Rourke in Immortals look Shakespearean in his grandiosity. More than Kitsch, they drag the movie down because neither they nor, admittedly, the good-guy humans can keep us interested in the conflict between Zodanga and Helium. Had the Tharks cleared the floor of both factions, then I could cheer. The collective vapidity of the Red Martians (with the arguable exception of Lynn Collins's warrior-professor-princess Dejah Thoris) ultimately kills a project that could have survived a sullen Kitsch and puts an often-impressive visual production to notorious waste. The creators profess to love the Burroughs stories, but they didn't trust the original material to win over movie audiences -- or else they didn't trust audiences to appreciate the material on its own terms. The consequences of their distrust are more infuriating than the other debacles I've mentioned for comparison's sake, because John Carter comes so close so often to being a good film, yet ultimately refuses to become one.
Posted by Samuel Wilson at 8:03 PM