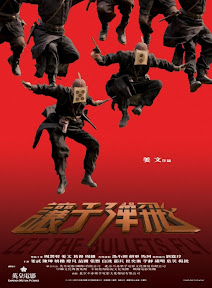 In 2000 the actor-director Jiang Wen premiered his World War II black comedy Devils on the Doorstep at the Cannes film festival. Despite winning a Grand Prix he found himself shut out of directing for nearly a decade, while Devils was banned by both China and Japan for its irreverent yet provocative portrayal of the two nations' conflict. Let the Bullets Fly is only Jiang's second film as a director since then, though he remained a popular actor throughout the decade. Bullets has the same darkly irreverent attitude as Devils, but in a safer and familiar context of Chinese pulp fiction. Because of the setting and the generic trappings, Bullets seems less singular a work than Devils, but distinguishes itself from other Chinese period crime films with a hard-boiled cartoonishness that makes it more like a Chinese Coen Brothers movie than Zhang Yimou's actual Blood Simple remake, A Girl, a Gun and a Noodle Shop. Having some high powered actors, including the director himself, helps further that impression.

Jiang plays Zhang Mazi ("Pockmarked" or "Pocky" Zhang), so named despite his unmarked face for reasons eventually explained. Zhang is the leader of a bandit gang in the early days of the Republic of China, circa 1920. The gang wears masks with dots denoting who's "Number One," "Number Two" and so on. This gang ambushes a train bearing a new governor, Ma Bangde (Ge You) to Goose Town. The train is derailed, to put it mildly, when it hits an axe embedded on the rail. To put it less mildly, the car flips like the truck in The Dark Knight and goes sailing over the bandits' heads. The governor and his wife survive the mayhem, but his counselor dies. Fearing for his life, Ma decides to pretend to be the counselor, telling Zhang that the dead counselor was the governor. He convinces Zhang to accompany him to Goose Town, where he'll tell the people that Zhang is, in fact, the new governor that none of them have seen before, so he can plunder the place at his leisure.

The protagonists' deceptively miraculous entry into Goose Town, where Chow Yun-Fat (below) is your friendly guide.

But someone else is already plundering Goose Town: the local crime boss Huang Fox (Chow Yun-Fat). War is inevitable as Zhang tries to assert his ersatz authority and refuses deference to the gangster. It becomes personal when Huang manipulates "Number Six" into killing himself, and it only grows more personal as more allies fall. Throughout, Huang doesn't realize that the governor is really a bandit and stages attacks on him with men wearing the gang's familiar masks in order to take the heat off himself. In the face of mounting evidence to the contrary, Zhang and Ma (who had inadvertently revealed the truth about himself under tragic circumstances) perpetuate the imposture, though Zhang can never be absolutely certain of Ma's loyalties. Episodes of violent absurdity mount until the inescapable final showdown.

Zhou Yun plays a woman who wants to be a bandit. This is her audition.

Despite all the mayhem Let the Bullets Fly is a character-driven comedy above all. It has a hard-boiled feel because Jiang films many of the key dialogue scenes involving himself, Chow and Ge in a fast-talking manner with rapid fire editing. All three are outstanding. Ge seems set up as a disreputable weasel yet proves an avid and ultimately sympathetic player in the three-way power game. Chow probably surprises his American fans with a broadly emotive performance as a criminal mastermind who probably isn't as smart as he thinks he is. He's not above lowbrow slapstick, most notably in an early scene with an idiotic body double determined to repeat everything Huang says in childish fashion. As our antihero, Jiang comes across like a Chinese Robert Mitchum, world-weary, wary and bemused all at once, cynical to his core yet sincerely feeling each loss in his circle. He lends the sometimes goofy proceedings a deadpan gravitas that somehow keeps us caring no matter how ridiculous the situation. He makes a great lord of misrule, especially when he has to remind his republican subjects at gunpoint that they musn't kneel to anyone anymore.

As a director, Jiang works on a high wire, making much of the action deliberately cartoonish while trusting himself and his co-stars to keep audiences emotionally invested in the story. Some scenes are pure slapstick, like the bit where the town's "justice drum" is cut loose from ancient vines and rolls crazily through the streets, chasing random citizens like a cartoon boulder until it crashes into a building -- and in the very next moment a body goes flying and bouncing off the drum, booted there by the local kung fu master. Later, Jiang balances pathos and black humor, making a sight gag out of the fact that a character has been blown in half by a bomb yet making the victim's death scene honestly poignant. He's never afraid to be cartoonish even in non-violent scenes like the one scored to the "Colonel Bogey" March (of Bridge on the River Kwai fame) when the three main characters make megaphone speeches to the people, Jiang terse, Chow unctuous, Ge transparently self-pitying. Cinematographer Zhao Fei makes it all as colorful as possible, in the starkest contrast with the monochrome Devils on the Doorstep, and fills the film with memorable images. Let the Bullets Fly can't help but seem less ambitious for being less controversial than Devils, but it reaffirms that Jiang Wen is a highly entertaining and imaginiative director with major potential.
Posted by Samuel Wilson at 10:46 PM