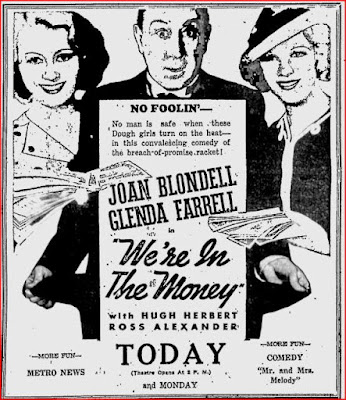 As a team, Joan Blondell and Glenda Farrell were sometimes known as "the Gimme Girls." In the Pre-Code era, they were Warner Bros.'s apex predators in the gold-digger category. Since they were apparently a popular pair, the challenge for Warners was how to keep them doing their thing in the era of Code Enforcement from 1934 forward. Frequent co-star Hugh Herbert was put to work (in his writerly identity of "F. Hugh Herbert") contriving a story; he shares the script credit and gets third billing in Ray Enright's picture. How to keep the girls chasing men? Make them process servers working for Herbert's law firm. That way they can infiltrate male sanctuaries with feminine wiles or simply storm in with their characteristic brazenness, as when they invade a men-only steamroom to serve a subpoena early in the show. Blondell's character is tiring of the racket, however, and wants to settle down with her chauffeur boyfriend (Ross Alexander), but Farrell eggs her into taking on one more big job for a big payday. They have to serve papers on three diverse cronies of a young millionaire being sued for breach of promise by Claire La Claire, Herbert's client, who lapses in and out of a French accent depending on her temper. The girls' targets are a sort of gangster (Lionel Stander), a nightclub singer (vocalist Phil Regan playing an approximation of himself) and a professional wrestler (Brooklyn-born "Kentucky Hillbilly" Man-Mountain Dean playing himself in no uncertain terms). All these big brave men are fleeing from "supeenies" requiring them to testify against their millionaire pal C. Richard Courtney, who has his own strategy for avoiding legal papers. It may not surprise readers to learn that his method is to travel as his own liveried chauffeur, in which role he has fallen in love with Blondell without knowing her work, while she has no inkling that her boyfriend "Carter" is subpoena target number one. 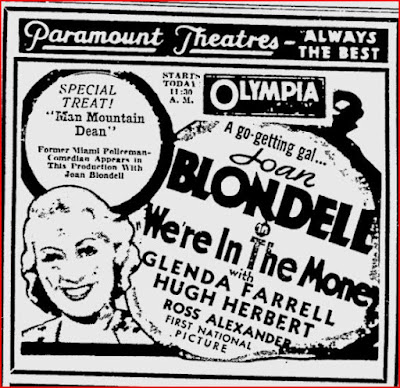 Since Blondell and Farrell have to tone down their sex appeal under the new Hollywood rules, Herbert and Enright pad We're In the Money with extended slapstick sequences. As a result, we get to see Man Mountain Dean, who worked his way into becoming Hollywood's go-to rassler in this period, in his squared-circle element. He wrestles "Chief Pontiac, the Indian Marvel" (Chief Little Wolf) in a charming scene highlighting the behavior of pro-wrestling audiences in the 1930s. Pontiac is the babyface in this match, and our heroines join in rooting for him by going "woo-woo-woo" in supposed Indian style. They heckle Dean as Pontiac struggles to pin him and finally end up with the big man in their laps when the Chief tosses him out of the ring. Since they need him to verify his identity, they advise the dazed grappler that the best way to come to is to recall his name and other personal details. His identity confirmed (for story purposes his legal name is "Man Mountain Dean."), the girls hand him a "good luck note" as he climbs back into the ring. Once he finds out it's a "supeeny" he hulks up and destroys Pontiac while the audience, joining in on the joke, showers him with papers of all sorts. In the other slapstick setpiece Blondell, Farrell and Herbert pursue Alexander's yacht in a speedboat that none of them really know how to steer. There's actually some quite effective process work in this bit, especially when the car speeds through the shadows beneath a pier. Taking the initiative, Blondell jumps from the boat into the drink so Alexander's crew will rescue her. The lovers bristle when they discover each other's impostures and Alexander throws Blondell back into the ocean. He thinks better of it, but the indignant Blondell finally dives in once more -- and this time the camera is close enough to show us that Blondell herself took the dive.

The plot plays out in familiar farcical fashion, with Alexander checkmating Herbert and spiting Blondell by agreeing to marry Claire La Claire, thus clearing himself of breach-of-promise. Once it becomes clear that a key piece of evidence against Alexander was doctored, there's a last mad dash to the rescue to prevent his marrying the real gold-digger of the picture. In the end, We're In the Money succeeds somewhat in perpetuating the good-natured aggression that defined the Blondell-Farrell team while toning it down by emphasizing Blondell's longing for domesticity. Herbert seems somewhat out of place as an unlikely infantile lawyer, a nut comic in the screwball era, but he does get his laughs and deserves some credit as a writer for his effort to solve the puzzle of carrying Blondell-Farrell into the Code Enforcement era. Enright keeps things moving and that's about as much as we could ask of him. Blondell and Farrell teamed twice more afterward, the last time being, appropriately enough, Gold Diggers of 1937.  Could they have kept the act going longer without Code Enforcement? Hard to say, since they'd still have gotten older, but Money hints that the Gimme Girls could have adapted to changing times quite nicely, though preferably with somewhat better material.

TCM's trailer seems cut down a bit, but notice the mockery of their own picture G-Men, the "Cagney reforms" picture -- as if to say the "G-Girls" haven't reformed at all.

Posted by Samuel Wilson at 8:34 PM