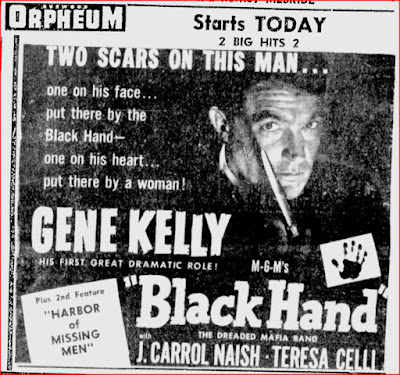 In Little Italy a man meets in secret with a policeman, risking his life to inform on la mano nera, one of the extortion gangs that terrorized Italian-American communities at the turn of the twentieth century. The man describes two individuals who threatened him, only to see them step out of the closet. The dead body in the closet belongs to the cop who's been killed, and whose uniform is now worn by a gang leader (Marc Lawrence) who watches the informant die by the knife. The Knife was the working title of Richard Thorpe's period thriller for M-G-M, a picture whose reputation has suffered due to the presumed-inappropriate casting of Gene Kelly as the initial victim's son, grown up and returned from a sojourn in Italy to seek revenge. True, Kelly is ethnically inappropriate for the role of Johnny Columbo, but those who think him unfit for the material may never have seen his turn as a psychopath in Robert Siodmak's singular noir musical Christmas Holiday. Kelly can do grim, and he does it nicely here in a tense early scene when he plies a mobbed-up bartender with drinks while pumping him for information and promising a later meeting that can not go well. But when he goes to the man's apartment, the bartender is already dead and a cop is waiting for him. J. Carroll Naish plays the policeman largely based on real-life Italian-American crimefighter Joe Petrosino, and the actor, normally nutty with accents and soon to be reviled, so it's said, by real Italians for his stereotyped performance on the Life With Luigi show, does something surprising here. Surrounded by actors doing Italian accents (Kelly isn't one of them), Naish tones down his own mannerisms, opting for more of a tough-guy New Yorker voice with variable hints of accent. His character tries to steer Columbo from the path of vengeance and toward lawful crimefighting through the patient collection of evidence. Together they try to start a citizen's group to combat the Black Hand, but the gangsters give Kelly a savage beating to make an example of him, breaking a leg (as if to signify that there'll be no dancing this time) and leaving him scarfaced for the rest of the movie.

As Kelly recuperates and studies law, Naish increasingly dominates the picture, stating its editorial viewpoint in a heavyhanded courtroom speech as he tries to convince a terrified witness to identify his tormentors. Luther Davis's screenplay actually attempts a sophisticated analysis of immigrant attitudes, asserting that they don't trust the state to protect them because they had no experience in the old country of government looking out for their interests, but adding that American government circa 1908 wasn't really doing all it could have to protect the poor from predators in their midst. Davis's problem is that he puts all of this in Naish's big speech rather than illustrating it through incidents and dialogue. But the picture is a thriller, not a social critique, so it can survive that shortcoming. Kelly reclaims the initiative after Naish is killed in Palermo just as he mails documents identifying certain New Yorkers (including the Lawrence character, now posing as a concerned citizen) as wanted criminals in Sicily. After the Black Hand kidnaps the baby brother of Columbo's girlfriend to intimidate Columbo into surrendering the documents, our hero realizes that he has time, before the package actually arrives, to track down the kidnappers and rescue the boy -- as long as he and his knife can get frightened or stubborn people to talk....

Kelly isn't very convincing as an Italian-American, unless you accept him as a model of assimilation, and his character is written erratically, careening between the paths of law and revenge, but he still makes an effective thriller hero, while Thorpe makes an effective thriller director. He stages several suspenseful sequences of people stalking each other along noirish streets, as well as one brilliant bit when Kelly is clocked over the head with a full, open pail of beer. The beer splashes over the camera lens, quite effectively representing the hero's slide into unconsciousness. Paul Vogel's cinematography is appropriately shadowy and menacing, while the overall production design makes a nice effort at recreating the slum environment on the M-G-M lot. Black Hand is a well-meaning movie intended to honor Italians' Americanization, but some may detect a whiff of McCarthyism (in advance of the Senator's own emergence as a Red-hunter) in its insistence on the need to testify against enemies in our midst. It should have a place in cinema history as an early and earnest attempt (not counting films from the actual period) to portray gangsterism before crime really got organized.
Posted by Samuel Wilson at 10:55 PM