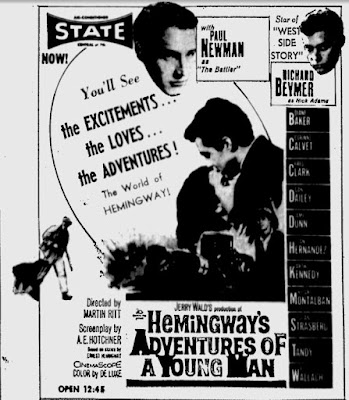 A. E. Hotchner's efforts to film Ernest Hemingway's short stories about Nick Adams were cursed from the start. His initial effort, an October 1955 TV adaptation of "The Battler," was to have starred James Dean as the title character, a punchy boxer living in the woods.  Dean's death compelled Paul Newman, who was to have played Adams alongside Dean, to play the boxer's part, just as he would take the role of Rocky Graziano, intended for Dean, in his star-making picture Somebody Up There Likes Me. Maybe Newman alone felt Hotchner's project a lucky one. When Hotchner got the green light from Twentieth Century-Fox and producer Jerry Wald to write a feature film adapting several Adams stories into a single narrative, Newman signed on to re-create his role as "Battler" Ad Francis. But before the cameras rolled Hemingway, normally deeply skeptical of film adaptations of his work yet impressed by Hotchner's TV plays, killed himself. Bad news for Hotchner, maybe good for the studio. It gave Fox an exploitation hook, especially given the tendency to see the Adams stories as a clef tales of Hemingway's own youth. Tentatively titled "Young Man," the film was burdened with the author's name; perhaps coincidentally, the change also catered to Newman's supposed superstition in favor of films staring with the letter H. By the time the film premiered in July 1962, producer Wald was dead. The film bombed. It failed so badly that it was virtually a career killer for star Richard Beymer, who had just starred in West Side Story and was cast in the expectation that the musical would make him bankable. Martin Ritt directed and the film was handsomely shot on locations in America and Italy by cinematographer Lee Garmes. It looks great but the story is hopeless. Beymer is trapped by the bildungsroman format; whatever you think of him as an actor, the script compels him to be callow so experience can mature him -- though many questioned whether Nick had truly matured by the end of the picture.

Hemingway himself never answered, nor even raised the question, and to ask it -- to think of the Adams stories as pieces of a larger narrative puzzle that requires assembly -- is to miss the point of Hemingway's literary project. His early short stories are experiments in form. Their point is to tell what there is to tell inferentially or indirectly, without old-fashioned exposition. His object was to capture the way people actually spoke or acted without resorting to artificial dramatics, yet allow the discerning reader to fill in why the characters say and do what they do by recognizing the emotional truth in his prose. To elaborate on what Hemingway had written as if that was necessary to clarify what he was writing about is to defeat his purpose. From what I've read about the film project, Hemingway was under the impression that Hotchner would film the stories as a sequence of stand-alone vignettes, as they exist in print. Adventures of a Young Man does more than that, importing elements from the non-Nick novel A Farewell to Arms and some stuff made up by Hotchner to give us an Adams toughened by hard work, war and loss to the point when he can finally cut the apron strings and leave home for good. None of this is necessarily inconsistent with what Hemingway actually wrote about Adams, but filling in the blanks is inconsistent with why Hemingway wrote about the boy.

But if Hotchner, Ritt or the studio betrayed Hemingway, did they still make a good movie? Not quite. Beymer can't help being overshadowed by his guest stars, not just the showboating Newman, who plays the Battler as if he'd taken real blows over multiple takes of the Graziano picture, and for years since then, but also a bombastic Dan Dailey as an alcoholic, addicted advertising man. Newman's screen time is disproportionate to the length of "The Battler" (he and Hotchner were longtime pals and business partners) and its place in the Adams canon -- he also gets to speak a famous line from To Have and Have Not, "a man alone ain't got no damn chance," --  and his and Dailey's performances give an inaccurate impression of the Adams stories as a parade of passing eccentrics. Even if his co-stars had toned down the character acting, Beymer would probably be outmatched, but he makes more of an effort than is usually recognized. Again, the script sabotages him, so that Nick seems to grow more petulant rather than more mature. The war stuff and the Farewell to Arms do-over, with Susan Strasberg as the doomed nurse, are fatal to the picture because of their misplaced familiarity. The whole thing feels padded due to Hotchner's obligation to touch a certain number of Hemingway bases along with the extra material. That is, the excesses that hurt the film as a Hemingway adaptation cripple it as a conventional movie. In any event, time had passed Hemingway by. 1962 was a year when the most bankable literary name on a marquee was Tennessee Williams. It wasn't Hemingway's world anymore and hadn't been for about a decade. He'd known that and raged against it because he couldn't keep up and the whole period look of this movie only proved the point, I suspect. If Adventures of a Young Man was meant as a cinematic monument to Hemingway, it did succeed somewhat, because it sometimes feels like you've entered a house of the dead.

If anything, the trailer makes the film look duller than it actually is. SarBear4Ryan uploaded this copy to YouTube.

Posted by Samuel Wilson at 7:30 PM