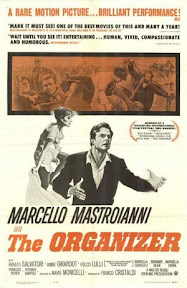 Mario Monicelli was one of the leading directors of commedia all'italiana -- "Italian Style" in a common translation. In an interview recoded for the Criterion Collection in 2006 -- four years before the nonagenarian director jumped to his death and six before Criterion finally released I Compagni on DVD, Monicelli relates that all'italiana was a label sometimes used pejoratively, by Italians, to compare Italian film comedies unfavorably with reputedly more sophisticated English fare. Monicelli himself takes a broad view of comedy, noting that Dante used the term to describe his long poem that included a descent into Hell as well an ascent to Heaven. Comedy, in Monicelli's view, can cover a lot of ground, and needn't have a happy ending. His own special comedic subject seemed to be human fallibility, as illustrated in 1963's epic-scale account of a failed textile strike in early 20th century Turin. The picture ends with the strikers returning to work after a teenaged comrade has been killed, with one of the leaders in jail and another on the run. What makes it a comedy? 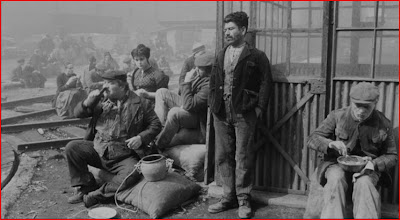 Without worrying about genre, we can be impressed by what we see. Location photography and overall cinematography by Giuseppe Rotunno give a strong sense of time and place, the sordidness of life in and out of the factory. The story, by Monicelli and two collaborators, captures the moment when factory workers can't stand their treatment by management any longer. They work fourteen-hour shifts with only a half-hour break for lunch. Exhausted before the day ends, they become vulnerable to accidents, as when a machine mangles an old man's arm. You can be sure they're not getting paid enough for all of it. Indignant, the workers also lack initiative. A plan to leave work early to protest conditions falls through due to failures of coordination and courage, but the workers are still punished for the slight inconvenience they caused the bosses. Enter an itinerant "professor" (Marcello Mastroianni) with an apparent history of labor agitation and timely advice on how to prepare for a strike. For example: before you let anyone know you're going on strike, buy as much as you can on credit, since the store owners aren't likely to give you credit once you've walked out. The professor helps the initial ringleaders work out a leadership structure and establish discipline. Ironically, an early test case of their authority is their decision to grant a severely indigent Sicilian with children to feed  -- we've already seen him go without lunch at work -- special permission to continue working. After they see his family's poverty, you can tell that they'll let him work, but they insist that he swear to abide by their decision one way or the other. For all their trouble, when the bosses learn that the Sicilian has reported to work only because the strikers gave him permission, they throw him out of the factory. I think we can call that comedy, albeit a very dry kind. 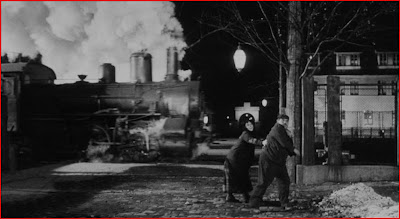 Mastroianni's entrance is merely a backdrop for another character's snowball fight, but the star eventually occupies the foreground of the picture. 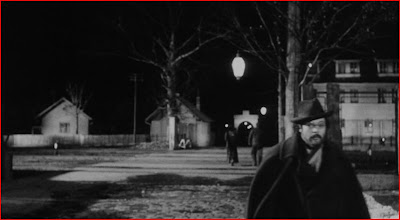 Overall, I suppose the comedy comes as Monicelli's comical proletariat blunders its way toward solidarity, even though one of the most comical characters is killed trying to divert a trainload of strikebreakers during a brawl at the train station. It might be time for pathos in someone else's movie, but Monicelli doesn't really go for the heartstrings as blatantly as some comedy directors do. His goal is sympathy, not pity. The closest he gets to all-out pathos is at the end, when a boy who had been urged to continue his schooling to secure a better future for himself reports for work at the factory after the strike. This scene of defeated ambition -- though it must be noted that the boy himself wasn't that keen on school -- is balanced by the escape of Renato Salvatori's character, once an apathetic cynic, now radicalized and ready to fight another day. That balance may be the essence of Monicelli's comedy, at least on this occasion. No defeat is total, and sometimes the survivors are better off for their defeat. Defeat itself isn't inconsistent with comedy. In slapstick comedy, the clowns probably lost more often than they won. Part of the comedy was our enjoyment of their transgression with the knowledge that they'd get a comeuppance for sticking their necks out. The strikers in The Organizer are really doing the same thing, with the same result, but just as we assume that the slapstick clown will be back for more, we can leave Monicelli's theater assuming that the workers are down but not out. 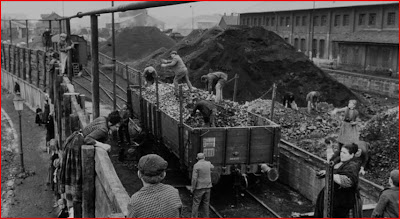 Strikers smuggle coal over a railyard fence into their neighborhood 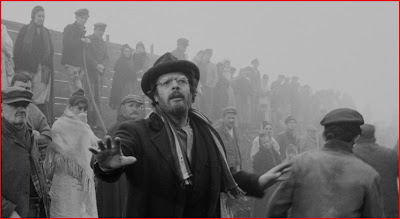 The professor tries in vain to discourage strikebreakers 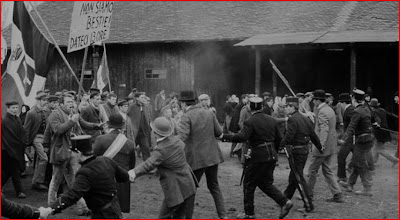 The final showdown at the factory, with Renato Salvatori holding the sign at left.

In the U.S., a film literally translated as "Comrades" was sold as "The Organizer," a Mastroianni star vehicle. The poster above even shows a clean-shaven Marcello, not the bearded tramp the film gives us. Critics can go too far in emphasizing the ensemble nature of the film, since Mastroianni's professor is a necessary galvanizer for the disgruntled yet disorganized workers. He doesn't arrive until about half an hour into the picture, but his is still a star turn. By introducing a large cast of characters before Mastroianni enters, Monicelli does make it clear that they all matter, and that we should judge the professor by his effect on them. Salvatori's performance is nearly as much a star turn, since he gets the most dramatic arc and he's nearly as charismatic an actor as Mastroianni. But the actors are good down the line in establishing broad-stroke authenticity. They're certainly comedic in comparison to the heroic types we might expect from a Marxist director. Monicelli claims to have been a Marxist, but stalwart socialist realism had no appeal for him. I Compagni is cinematic Marxism all'italiana, class consciousness with a human face, without taking victory for granted. But your politics shouldn't determine your enjoyment of a film that's more humane than political, more interested in people than dogma. It might prove a useful reminder to some people of why unions once seemed necessary to so many people, but even if it doesn't convince anyone of unions' persistent relevance, anyone with a heart should like The Organizer and his comrades.
Posted by Samuel Wilson at 8:47 PM

Another splendid piece, and one I hope to say more about soon. Yes, a comedy indeed, surprised some didn't cast votes for it in the comedy balloting.