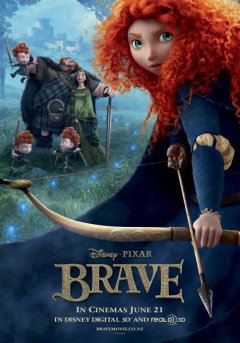 Pixar's new animated feature had a troubled production. It's not the first so troubled, but there's a political or cultural significance this time because Brave was supposed to have been Pixar's first feature directed by a woman. In the end, Brenda Chapman shares the directing credit with Brendan Chapman, while Steve Purcell is recognized as a presumably subordinate co-director. Pixar is our nearest equivalent to a classic Hollywood studio, so collective production is a fact of life. But because of the peculiar publicity Brave's shifts in personnel have received, reviewers seem inclined to look for seams in the finished product. It's assumed that Chapman's vision was compromised, and that assumption puts one strike on the movie before it even begins. While reviewers may think they're doing justice to Chapman, I think they're a little unfair to Brave. The new Pixar is doubly unique for its period setting -- ancient Scotland -- and its intense focus on a mother-daughter relationship. The latter detail gives the film considerable emotional power and archetypal weight. Deeper critics will have a field day with Brave -- and so will pornographic fan artists, I'm afraid.

On another level, Brave is familiar stuff; it's a Disney princess picture, a female coming-of-age story. But this time the heroine resists the coming of age, if that means taking a husband or living up to a queenly model of domesticity. Yet Merida doesn't come across as a daddy's girl. Her father, the king, certainly enjoys her tomboy antics and encourages her from an early age, but she doesn't really go running to him for solace when she argues with her sometimes doting, sometimes daunting mother Eleanor. There's actually a sort of realism here, since Dad was probably off campaigning most of the time. Merida's primary bond is with Eleanor, and that's why their arguments over the daughter's duties to the dynasty are so painful to both of them. Merida precipitates the picture's crisis because she wants her mother to change -- her attitude, that is. There is, without spoiling things (Pixar has been quite coy about the main event of their film), more change than Merida bargained for, and in a way what befalls Eleanor serves as a kind of metaphor for Merida's own coming of age. It stands in for the often-"gross" realization that your parents are sexual creatures just as you come to appreciate what that means. In an ingeniously cartoonish way, Eleanor undergoes a rite of passage on Merida's behalf, with the ironic payoff, given the suspenseful threat of a permanent change, that both mother and daughter are changed -- presumably permanently -- for the better. Whoever's idea that was, it's kinda brilliant.

If you want to see a Pixar picture in a theater, you have to sit through trailers for other people's 3-D animated features. This is instructive. It puts Pixar's achievements, and Brave's in particular in perspective -- in relief, really -- if you sit through a promo for the next Ice Age film or a teaser for the Despicable Me sequel, or even the preview for Disney's own Wreck-it Ralph before the feature presentation. Frankly, the point is usually made by the end of the annual short, like this year's La Luna. Throw Brave into the scales and the comparison is unfair. Working in heroic-fantasy mode, Pixar is in a new place and the results are stupendous. Even the fault-finders acknowledge the achievement of animating Merida and her flaming red hair and I can only second the acclaim. The character animation is terrific nearly across the board, the exceptions for me being Merida's triplet younger brothers, who seem only blandly cute, especially when they go through changes of their own, compared to our fleeting glimpses of a younger Merida. They're a disappointingly generic element of a picture that rarely goes wrong. It may be telling that the one sequence that really falls flat is the film's one real attempt at anachronistic humor, a gag featuring a magical Dark Age version of an automated answering service. If you expect to see predictable corporate-mentality elements in the picture it isn't too hard to find them -- but they don't come close to defining Brave. Maybe it isn't anyone's personal vision in its final form, but it's far from impersonal. Brave may prove but a respite from a Pixar decline, given that next year's feature is the third sequel in four years, but it definitely proves what the studio is capable of in convincing fashion. If this was a troubled production, maybe smooth sailing is overrated.
Posted by Samuel Wilson at 10:15 PM

Probably one of Pixar’s best-looking flicks, but not their best film at all. Has a great set-up, but then loses itself about half-way through and just got a little too kiddish for me. Then again, maybe some parents will like that and so will the kids, so who am I to judge? Good review Samuel.

Dan, it did get "kiddish" in some ways that are all too familiar, but I wonder what critics thought might actually happen, or wanted to happen, as opposed to what did happen? Until someone opens up with their expectations, their criticisms seem ill-founded. Thanks for writing.