That Hitler movie with Richard Basehart must be doing well, because here's some Nazisploitation on its tail. This is Albany NY's idea of a drive-in attraction.

Ralph Porter's After Mein Kampf is not to be confused with a more questionable 1940 film called After Mein Kampf? Porter's 1961 release is apparently a straight documentary (or "shockumentary," as IMDB suggests) while the earlier film included reenactments with such young actors as Peter Ustinov and Herbert Lom.  You can find the earlier film (with the question mark) readily available online, but Porter's film may well have vanished without a trace, except for three reviews on IMDB which may well be for the other movie.

Continuing a wartime theme, here's a belligerent triple-bill of guns, gals and antics in Dubuque IA. 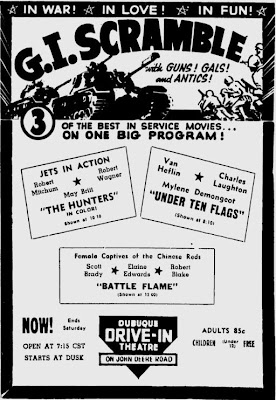 Two of these pictures sound credible, but Battle Flame is a 1959 B picture from Allied Artists. The sole IMDB reviewer writes that "Scott Brady speaks his lines as if he were reading them from cue cards. That's as much of a blurb as this Korean War melodrama gets.

In 1962 it looked as if Robert Bloch might become a household name, but first he had to get past the stage of being identified only as "Author of Psycho." Here's one of his would-be breakthrough films opening in Reading PA.

Pretty audacious of the studio to invoke the "first horror film" with that title for a picture that is not a remake, but it happens not to be bad. Lupinmaru seems to have filmed the trailer as it played on his TV set, but take a look anyway. 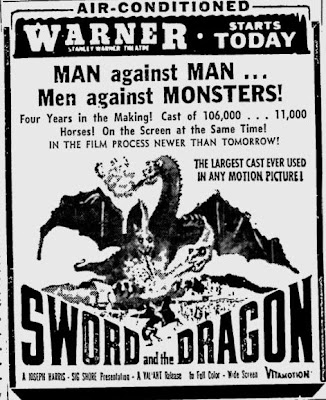 In its American form, this picture was a mainstay of cheap TV for generations. I remember seeing it often on a campus channel back in my schooldays and being stunned by the discrepancy between the self-evident scale of the production and the soundtrack that sounded like a Saturday morning cartoon. Most of the video clips I could embed here have some robots talking over the picture, so screw it.

And now for some real exploitation, starting in St. Petersburg FL. 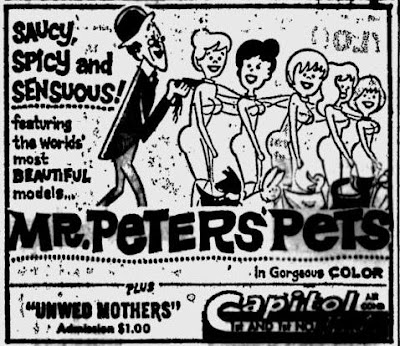 From the era of high concepts, this is something about a man who gets the power to turn into animals so he can peep at naked women. I think that's all I need to say about that one, though here's more if you want to know more. Let's move on to Youngstown OH, where men have been waiting impatiently for a Doris Wishman movie. 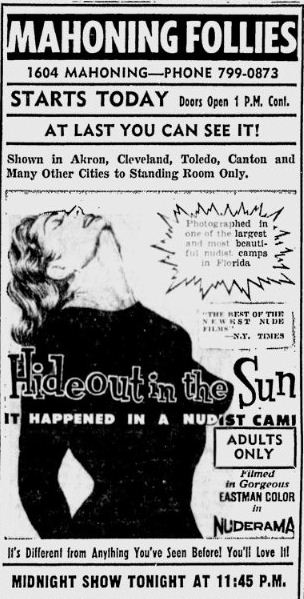 Bank robbers hide out in a nudist camp; one of them falls in love with a captive camp worker. I think this could be made today, don't you. And with that glowing blurb from the Times, can you blame those tired businessmen of 1962 for wanting to see this one?

Our last stop is Palm Beach, for something breezy. 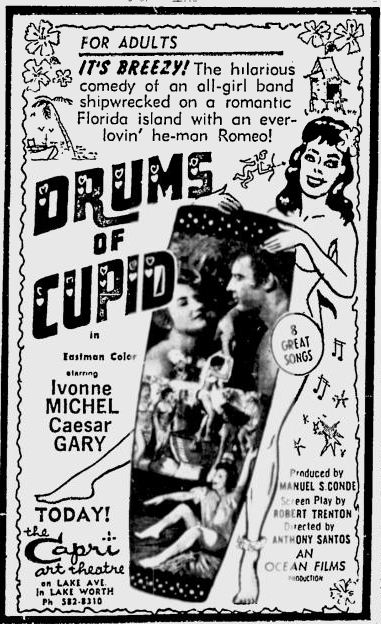 Something Weird sells this Cuba-lensed non-nudie under the alternate title Girls on the Rocks. The musicians encounter a jungle man and cannibals, and there's a twist (not the dance) toward the end. If it doesn't actually have any naked women in it, then this picture deserves the exploitation crown for the weekend.
Posted by Samuel Wilson at 7:30 PM